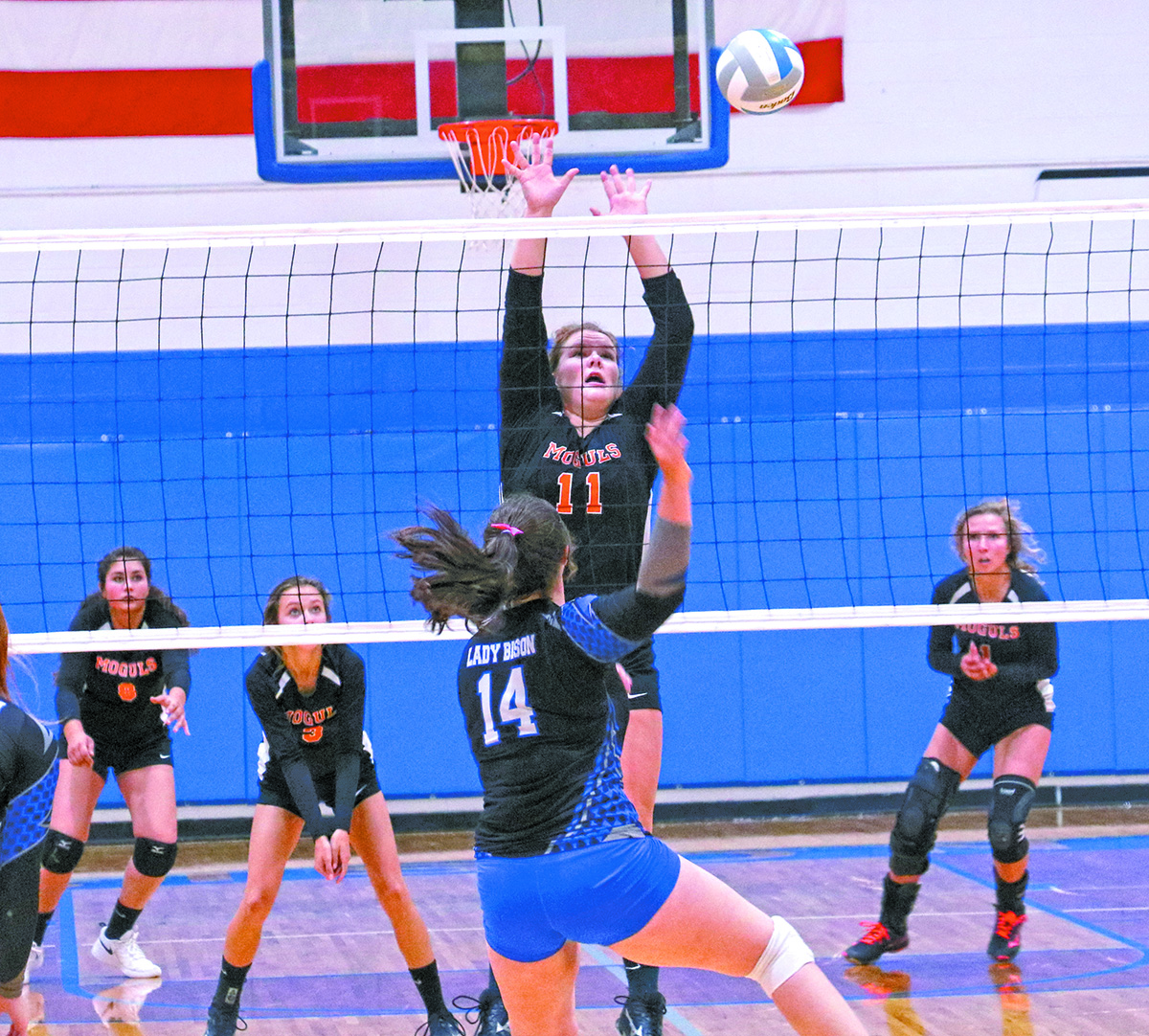 EDGEMONT – The Edgemont Lady Moguls volleyball team competed in five road matches last week, first defeating Custer 3-0 on Monday, Oct. 5, then splitting a double-header in Rapid City on Thursday, Oct. 18 with a 3-1 win over Newell and a 0-3 loss to Rapid City Christian. The girls wrapped up their week on Friday, Oct. 19, with a pair of 1-2 losses versus both New Underwood and Wall.

“Monday we played well in Custer,” said Edgemont head coach Susan Ostenson. “Kiara Allen was a force on the net an ended all three sets with a block kill.”

Maddie Peterson led the team with 17 digs followed closely by Ostenson with 14 digs along with a team-high 11  kill assists. Morgan Peterson had five kill assists.

Versus Newell, the Lady Moguls won with games of 25-19, 24-26, 25-25 and 25-17 while amassing a total of 12 ace serves in the match, with Morgan Peterson earning four, Jenna Ostenson three, Maddie Peterson and Taylor Grill with two apiece, and Abby Tidball with one.

Abby Tidball and Maddie Peterson each had eight kills to lead their team, followed by Kiara Allen and Taylor Grill both with six kills apiece.

The team also got a total of seven blocks, with Kiara Allen leading the charge with three followed by Abby Tidball with two and Maddie Peterson and Sarah Barker each with one.

Maddie Peterson meanwhile also earned an amazing 27 digs in the match, with Abby Tidball adding 14 and Jenna Ostenson 10. Ostenson also had a team-high 18 kill assists, with Morgan Peterson getting 13.

In the 0-3 loss to Rapid City Christian by scores of 13-25, 13-25 and 12-25, Abby Tidball led the team with four kills; Kiara Allen had two solo blocks; Maddie Peterson, Morgan Peterson, Taylor Grill and Lizzy Tidball each had five digs; Jenna Ostenson and Morgan Peterson had six kill assists; Ostenson and Grill also each had one ace serve.

“Last Thursday, Rapid City Christian was too much for us, but we put things together to beat Newell in four,” added Coach Ostenson. “On Friday we struggled against both New Underwood and Wall and lost both martches 1-2. Credit goes to both of these teams who hit well and were all over the floor. They both have high region standings and impressive records for good reason. We improved each set of both matches, but weren't able to finish ahead.”

This week, the Lady Moguls wrapped up their regular season with a home match versus Pine Ridge on Monday, Oct. 22, which they lost 0-3 by scores of 25-27, 19-25 and 24-26. Next week, they will begin post-season play and could potentially host a first-round game on Monday, Oct. 29.

Edgemont is currently seeded seventh in the Region 7B with a 11-17 record.

With her teammates behind her, Edgemont's Abby Tidball goes up for a block in a game played versus Hot Springs earlier this season.