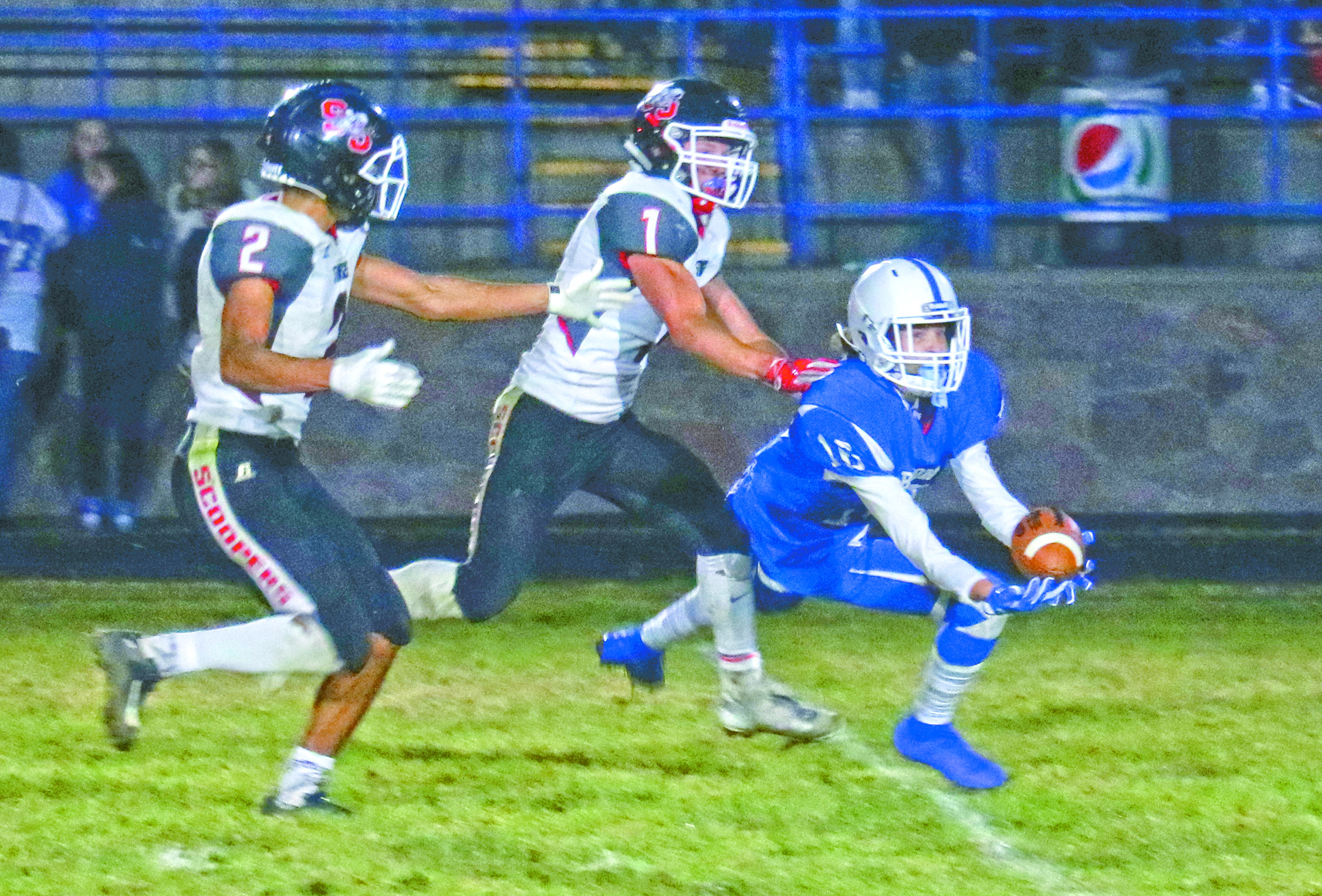 HOT SPRINGS – Up 14-0 just into the second quarter last Thursday night at home versus the Sturgis Scoopers, it appeared, early on at least, that it was going to the Hot Springs' night as they were hoping to improve to 7-2 on the regular season, and possibly even host a first round playoff game this week.

Things however began to change as the second quarter wore on.

Despite giving up a Sturgis touchdown with 4:15 left in the second quarter, Hot Springs quickly answered and went back up by two touchdowns 20-7 with 2:15 left in the quarter. Then, with the ball back in their hands, and in Sturgis territory, the Bison attempted to increase their lead with less than a minute remaining before halftime.

Unfortunately, Hot Springs' drive stalled and they were forced to punt. This ended up being the turning point of the game as the Scooper's Cedrick Stabber returned the kick 95 yards for a touchdown.

That special teams play pulled the Scoopers to within 20-14 at the break, which eventually propelled them to a 35-27 win over host Hot Springs, after they scored 21 more unanswered points in the third and fourth quarters.

Down 35-20 with only 30 seconds left in the game, Hot Springs however did tack on one more score with an 11-yard TD pass from Morgan Harkless to Matt Norton, but following a failed on-side kick attempt, it was too little, too late.

Senior Andrew Wendland got the scoring going early for Hot Springs with a 40 yard touchdown run in the first quarter, on his way to a team-leading 88 yard rushing.

Hot Springs' next score came on a 20-yard pass from Harkless to junior Thomas Massa early in the second quarter. Harkless would eventually complete 12-of-22 pass attempts for 174 yards including two touchdowns and one interception. He would also rush for 46 yards on 10 carries.

Norton led the Bison in receiving with 86 yards on five catches including a long of 30 yards down the middle of the field in the fourth quarter while being double-covered, as well as one 11-yard touchdown catch in the closing seconds of the game.

Total yards for the two teams was very close with the Bison gaining 332 (174 passing / 158 rushing) followed by Sturgis with 326 yards (63 passing / 263 rushing). The Scoopers were led by their quarterback Gavin West who completed 4-for-10 passing for 63 yards and a touchdown, but also led the team in rushing with 95 yards on 11 carries, including two touchdowns.

Despite the loss, the Bison (6-3) were still able to qualify for this week's Class 11A Quarterfinal Playoffs, but will be doing so as the 8th and final seed, meaning they will travel tonight (Thursday) to No. 1 seed Tea Area (8-1).

“We talked about creating our own path to the playoffs – don’t put yourself in a position where we have to wait and see if/where we play,” Coach Kramer said. “Fortunately we get to continue; getting a second chance in football is unheard of. We’ll take advantage of it, work hard and prepare to play the No. 1 team in the State. We’re huge underdogs with nothing to lose, that makes us dangerous.”

Senior Matt Norton lowers his body to haul in a long pass from quarterback Morgan Harkless during Hot Springs' fourth quarter comeback attempt versus Sturgis last Thursday night at Woodward Field. Despite making the catch for a 30 yard gain into Sturgis territory, the Bison were unable to capitalize for a score on the drive.