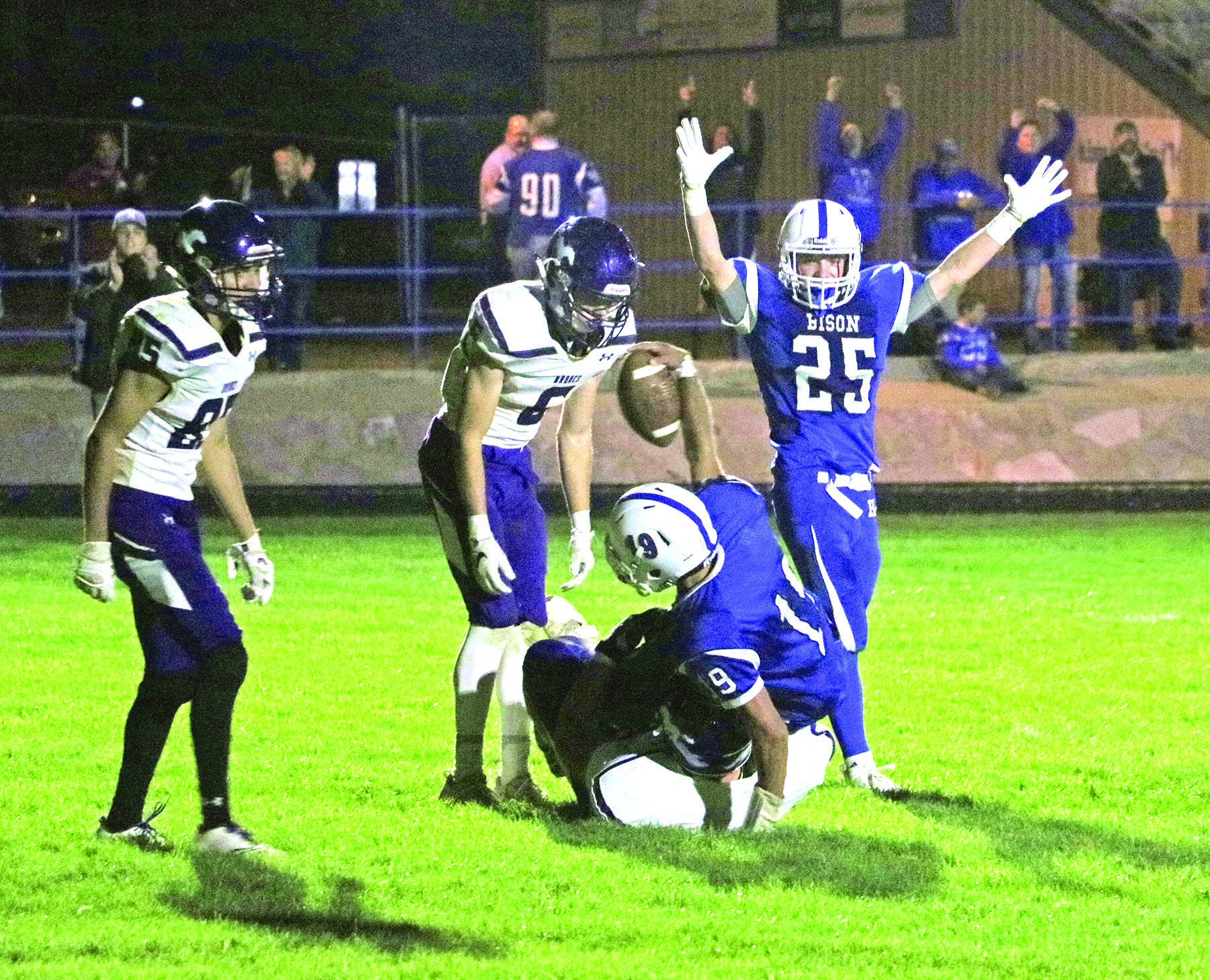 HOT SPRINGS – After watching their hometown Bison struggle in the first half and be down 21-0 with only a minute remaining in the second quarter, very few of Hot Springs' fans at last Friday night's football game were giving them much of a shot at coming away with a homecoming win over Belle Fourche.

But 54 seconds before the halftime break, as the last bit of evening sunlight was disappearing behind the near capacity-filled grandstands of Woodward Field, a glimmer of hope emerged.

That is when senior quarterback Morgan Harkless found his senior teammate Matt Norton on a slant across the middle of the field, which ended in a 32-yard scoring play and pulled the Bison to within 6-21 after a missed point-after attempt.

“The touchdown right before half was huge for us,” Hot Springs head coach Ben Kramer said of the play that helped spark his team's come-from-behind 28-21 victory over the Broncs.

After a Belle Fourche punt on their opening drive of the second half, Hot Springs made it across midfield but was stopped on fourth down. However, thanks to a penalty against the Broncs, the Bison were able to continue the drive which allowed Harkless to find his junior 6-foot wideout Thomas Massa in traffic, but open, for a completion at the 9-yard line.

Harkless then took care of business himself on the next play as he ran it in for a touchdown, and then completed a pass to Norton to convert the two-pointer and bring the Bison to within 14-21 with 6:03 still left in the third quarter.

Things continued to go Hot Springs' way on the Broncs' next drive when Belle Fourche  attempted a halfback pass along their own sideline. The pass however fell short and into the arms of Harkless who was providing underneath coverage downfield.

With the ball back in Hot Springs' possession at the 23-yard line of Belle Fourche, the Bison wasted little time and were back in the endzone on a three-yard QB scamper by Harkless, which tied the game 21-all with 4:30 still to go in the third quarter.

The game winner for Hot Springs was a four-yard pass completion from Harkless to Norton with 7:50 remaining the fourth quarter. The team's final touchdown pushed the final score to 28-21 and jacked up the large home crowd, which included numerous HSHS alumni in town for the 1968 and 1978 class reunions, as well as the Hot Springs Bison Athletic Hall of Fame banquet that inducted the 1967 undefeated Bison football team.

“I'm extremely proud of how the team was able to bounce back in the second half,” Coach Kramer said. “We have plenty to work on going forward but this one put us in a really good spot looking toward playoffs. It doesn’t get any easier, we need to do everything better. Great end to a great week of Homecoming.”

Despite giving up some big pass plays in the first half, including an 82-yard touchdown pass from Tate Hostetter to Jackson Tyndall in the first quarter, Hot Springs' defense was stifling and impenetrable in the third and fourth quarters. They were able to keep the Broncs off of the scoreboard the entire second half, while the Bison on the other hand stepped it up on offense by scoring 28 unanswered points in the final 25 minutes of the contest.

Leading the way defensively for the Bison was Brand Baker, who had 14 total tackles (7 solo) along with a sack. Kalub Wilson 11 tackles (6 solo) including four for a loss of yards. Harkless (4 solo), Andrew Wendland (4 solo), Thane Lockhart (3 solo) and Garrett Heil (1 solo) each had a total of five tackles apiece as well.

Offensively, Harkless finished his night completing 10-of-21 passing attempts for 89 yards with two touchdowns and one interception. He also rushed for 27 yards on 11 carries and two touchdowns.

Wendland led the Bison in rushing with 96 yards on 15 carries, with a long of 38 yards. He also had four receptions for 23 yards.

Norton led the receiving corps with four catches for 34 yards and two touchdowns.

The victory improved Hot Springs season record to 4-1 and also catapulted them into a tie with Madison for third place of the current Class 11A power point standings, behind only undefeated Dakota Valley and Tea Area who are each 5-0. The loss dropped Belle Fourche to 2-3 on the season and in ninth place of the statewide Class 11A standings.

This week, Hot Springs travels to Class 11AA Spearfish, who is 1-4 and picked up their first victory of the season last week, with a 32-21 win over Sturgis Brown. Kickoff at the Black Hills State University campus is set for 6 p.m.

Fans in the background join Bison teammates Andrew Wendland (25) and Morgan Harkless (19) on the field as they raise their hands in unison to celebrate the game-tying touchdown in the second half versus Belle Fourche last Friday night, which knotted the game up at 21-all with 4:30 left to go in the third quarter.