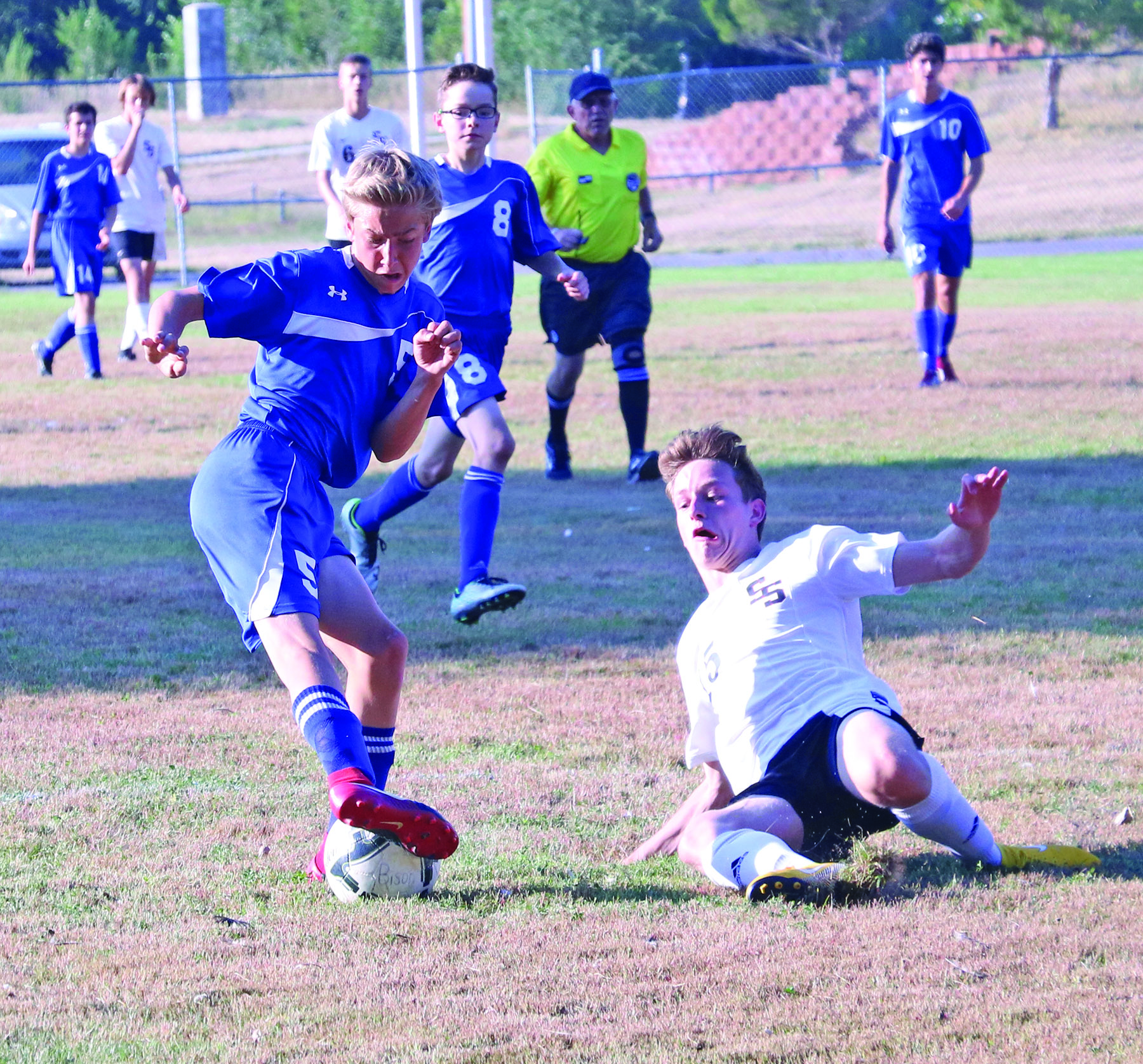 HOT SPRINGS – The Hot Springs Bison JV soccer team went 2-0-1 in three games played over a period of seven days, first defeating Douglas by a score of 4-1 on the road ,Sept. 8, and then tying Rapid City Central 1-1 on Sept. 11 in another road game. The Bison returned home Friday, Sept. 14 where they defeated the Sturgis Scoopers by a score of 3-2.

The strong showing in their last three games has improved their season record now to 2-1-3.

First, in their 4-1 win over Douglas, Head Coach Wendell Gehman said the Bison came out strong and dominated play most of the game, which included a 2-1 lead for Hot Springs at halftime. That lead was extended in the second half, thanks to a hat trick by Max Meyer. The win was sealed by a tap-in goal by Jadon Belitz off a defensive error, according to Coach Gehman.

“Jacob Haertel had a solid game in the goal with Cade Gehman anchoring the back line,” Coach Gehman said. “We were able to control the midfield and sent the ball through numerous times connecting twice with Max Meyer who finished nicely. We were able to rotate all our players in to give them some minutes. Several younger players stepped up and performed, especially our defenders who logged the full 80 minutes. Solid game all around.”

“The Bison played hard and created more scoring chances than the home Cobblers until they had a breakaway in the last 5 minutes of the first half to break the deadlock,” Coach Gehman said. “Continued solid work by the Bison team led to Spencer Hagen capitalizing on an error in their defensive third. After a couple of touches, he crossed the ball into the box where Jadon calmly deflected it past the keeper to even the match.

“Each team had several more chances toward the end of the game, but it ended all even,” added Gehman. “We played much better than I had anticipated and I was proud of the team’s effort.”

At home versus Sturgis last Friday, the Bison had a strong first half which saw them jump out to a 3-0 thanks to goals by Maggie Preuss, Michael Rooks and Max Meyer.

“The Bison came out strong at the beginning of the first half,” said Gehman. “We had the lion’s share of the opportunities, but Sturgis battled hard. The goals came for us in the first half with a career first for Maggie Preuss, a 7th grader, who pounced on a rebound from a Max Meyer shot to finish it in the lower left corner. Our second goal from Michael Rooks came from distance when he turned and shot quickly with his left arcing the ball over the Sturgis keeper. Goal three from Max Meyer resulted from his hard work up front ending in a deft left-footed shot past the outstretched goalie.”

“In the second half, Sturgis ratcheted up the pressure resulting in their first goal with in the first 15 minutes,” Coach Gehman said. “Sturgis put their second one in with less than 10 minutes to go in the game. The Bison battled hard to the end and held on for a well-deserved second win.”

Hot Springs Jadon Belitz, left, makes a quick stop of the ball to keep it away from a Sturgis defender last week at home.