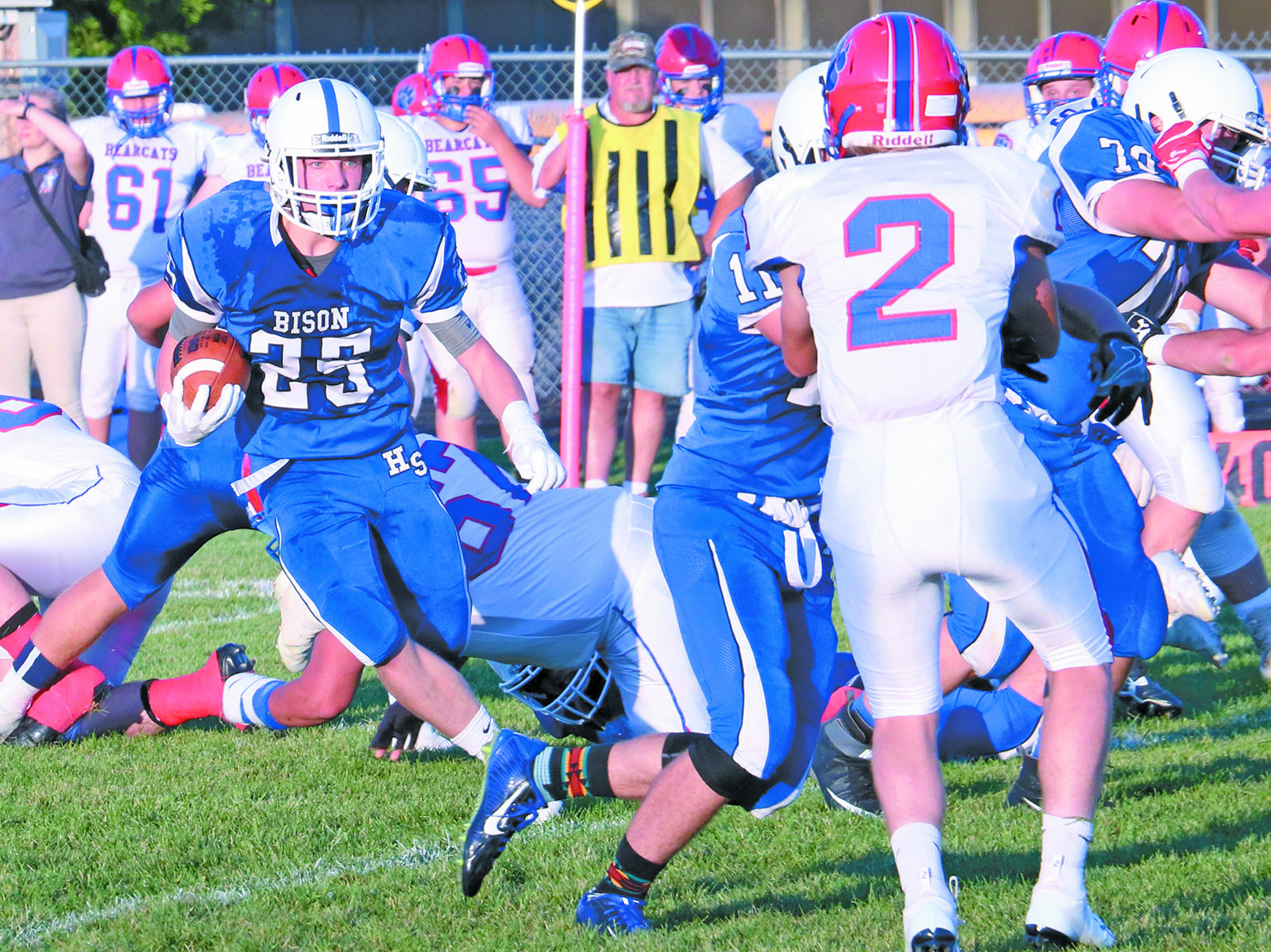 It was a “tough night all-around” Coach Kramer said after the game, which described not only the 13-28 loss, in a game which saw the Bison take an early lead and be down by only one point at half time, but also the way in which the game ended.

After just giving up a long 44-yard touchdown run by Douglas down the middle of the field in the final minute of the game, the Bison were attempting a drive for pride to add some points in the closing seconds. Hot Springs was making some headway and moving down the field with a series of successful short passes from senior quarterback Morgan Harkless to senior wide receiver Thane Lockhart.

With just 15 seconds on the clock, the two Bison hooked up on their third consecutive completion when Lockhart was hit hard and taken down from behind by a Douglas defensive back. Not getting up after the tackle, medical personnel quickly rushed onto the field attended to the downed Bison, whom would eventually be taken off the field by stretcher and loaded into the ambulance.

While the scene was a scary one for all in attendance at Woodward Field, according to Coach Kramer, the measures were precautionary, and other than a concussion, Lockhart will be fine.

“Obviously the night could’ve been much worse than just losing a football game but it sounds like everyone is going to be ok,” Kramer said.

The night started out very well for the host Hot Springs Bison, as they took the game's opening drive the distance, ending with an 18-yard touchdown run by senior running back Andrew Wendland.

Douglas however answered in their first drive, following a long kick-off return to the 12 yard line, and tied the game 7-7 with an 11-yard TD pass from QB AJ Yeaman to Dylon Case. Following a Hot Springs fumble while returning a punt, Douglas then went up 14-7 near the end of the first quarter when Yeaman hit Brady Brooks for a 31-yard passing TD.

Afterwards however, it was Hot Springs' turn to answer through the air on their next drive in  the second quarter, as Harkless scrambled to his left on a third-down play and found senior teammate Matt Norton in the endzone for a 30-yard touchdown pass. Following a missed PAT however, the Bison were still down 13-14.

Neither team scored in the third quarter, as the Bison were hampered by a pair of injuries to the two key players in their previous scoring drive. Harkless would sit out a number of plays, but would return, while Norton missed the entire second half. Hot Springs missed out on a good opportunity to score points in the third quarter, but fumbled near the goal line. They would however get the ball back on a fumble recovery, but were unable to score on the subsequent drive.

Douglas however was able to add to their lead in the fourth quarter on a pair of big plays, including a 78-yard catch and run for a touchdown by Christian Coffman, along with a 44-yard QB sneak up the gut in the final minute.

“Our offensive and defensive line both dominated all night,” said Coach Kramer. “The two turnovers and the big plays we gave up were the difference.”

Harkless finished the night passing 7-for-14 with 98 yards and one touchdown, while also rushing for 58 yards on 11 carries.

Wendland led the team in rushing with 173 yards on 27 carries, including one touchdown. Kalub Wilson also added 22 yards on 10 carries.

Lockhart was the leading receiver with four catches for 60 yards. In one half of play, Norton had one catch for 30 yards and a touchdown.

Despite the team's first tough loss of the season, which dropped his team to 2-1, Coach Kramer said he saw a lot of very positive things from his boys.

“Pre-game we talked about dealing with adversity, how are you going to deal with an adverse situation?” Kramer said. “ I can say that they answered that question on multiple levels Friday night. Anytime you start losing guys to injury you look to your Number 2. They come off the sideline cold and you just hope they’ve taken advantage of the reps they get in practice. We had some guys show us that we’re deeper than we might’ve thought.”

Defensively, the Bison were led by Chad Kelso with eight tackles (3 solo) including two for loss. Harkless added seven tackles (4 solo), while Norton (3 solo), Garrett Heil (2 solo, 1 fumble recovery) and Brand Baker each had a total of four tackles in the game.

“This may be the toughest team I’ve ever had the pleasure of coaching. I’m glad we don’t have to play us,” Kramer added.

Instead, the Bison do play in Custer this Friday for the annual Southern Hills Showdown. Kickoff is set for 6 p.m.

Hot Springs senior running back Andew Wendland looks into the eyes of a Douglas, Wyo., defender as he follows the blocks of his teammates last Friday night at Woodward Field. Wendland led the Bison in rushing on the night with 173 yards on 27 carries, including one touchdown.