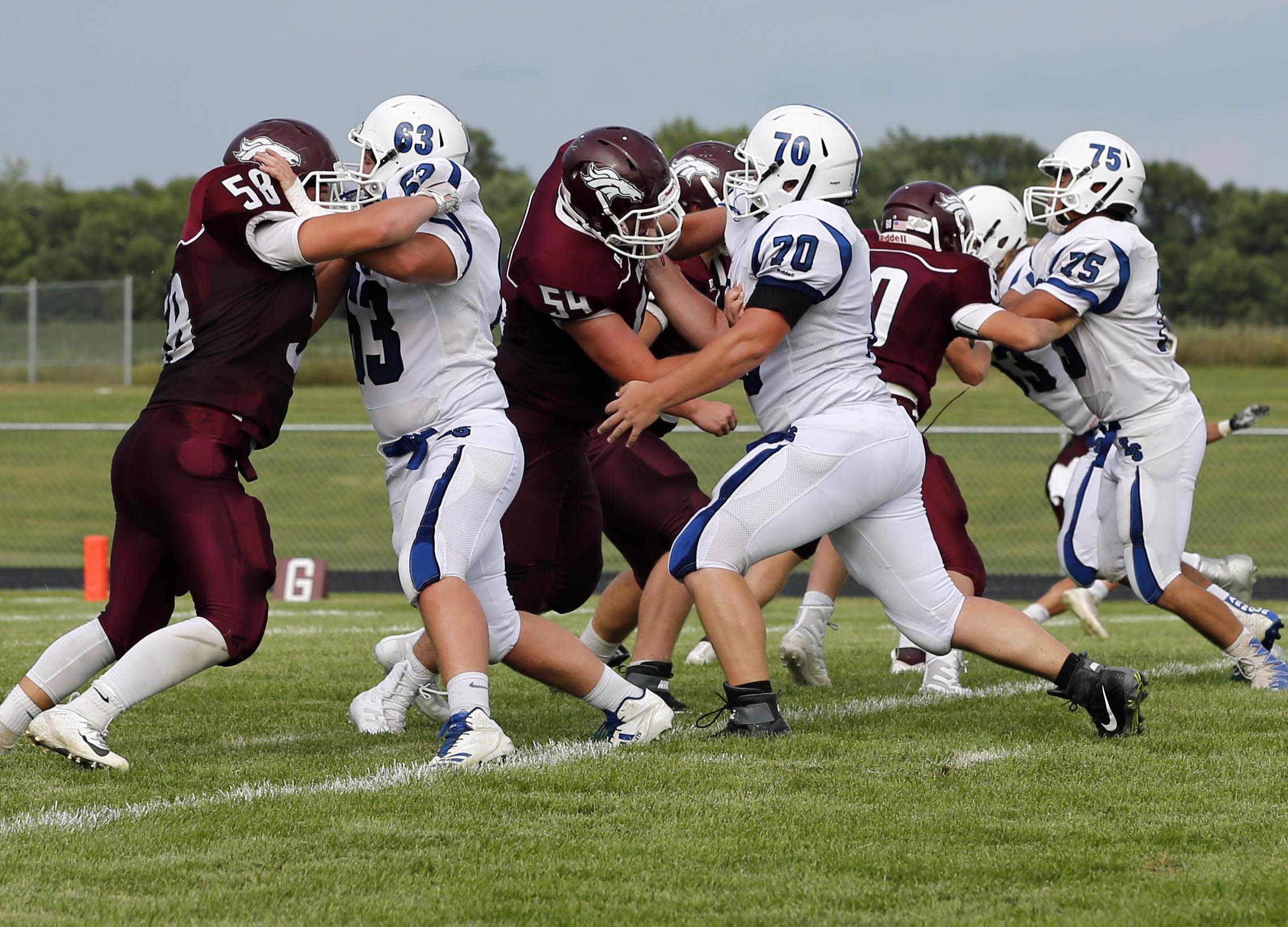 COLTON – After a disappointing season last year which saw the Hot Springs Bison football team finish with a 2-7 record, including a 13-48 loss to Tri-Valley at home to open the season, the 2018 campaign appears to be much improved as the Bison found redemption over Tri-Valley last week on the road and won by a score of 24-14.

“I'm very happy with how the boys played Friday Night, an all around good trip for all of us,” said Hot Springs head coach Ben Kramer.

The Bison jumped out to an early 13-0 lead in the first quarter, thanks to a pair of TD connections from senior quarterback Morgan Harkless to his classmate Matt Norton. The first came from 24 yards out, and the second from nine yards away.

Tri-Valley – which represents the towns of Colton, Lyons and Crooks just northwest of Sioux Falls – answered though the air as well on a screen pass in the second quarter when QB Mason Mathieu connected with four-time state wrestling champion Caden Lamer for a 38-yard touchdown pass. Following the two-point conversion, the Mustangs pulled within 13-8.

The Bison however expanded their lead to 15-8 on a safety before the half when Tri-Valley's longsnapper hit the goal post on a punt attempt near their own endzone.

The second half saw Hot Springs expand its lead with a 19-yard Matt Norton field goal in the third quarter and then an 11-yard touchdown run by fellow senior fullback Kaleb Wilson, which put the Bison up 24-8.

Tri-Valley added an 88-yard kickoff return for a touchdown, but it was too little, too late, as the Bison came away with a 10-point victory.

While the offense for the Bison certainly provided its share of highlights, the true key to the win may have been the Hot Springs defense.

“Defensively we played fast, played physical and suffocated their rushing attack,” Kramer said. “Take away the long screen, and we hold them well under 100 yards total offense.”

Harkless (6 solo including 2 for loss) and Wilson (3 solo) led the Bison with nine total tackles each followed closely by Andrew Wendland (4 solo) and Brand Baker (2 solo) each with eight total tackles, and Garrett Heil (6 solo and 4 for loss) with seven, including a sack. Caleb Maciejewski also added a sack and five tackles.

“Offensively we haven’t been that balanced in a long time, and were able to mix the run/pass successfully,” Kramer said. “I feel we left some points on the field but happy with our ability to move the ball on a good team.”

Harkless finished going 8-for-11 passing for 117 yards and two touchdowns. His primary target was Norton who had four catches for 113 yards including two Tds.

Wendland led the Bison in rushing with 123 yards on 21 carries, including a long of 18 yards. He also had four catches for a total of four yards. Wilson meanwhile had six carries for 11 yards, including one touchdown.

This Friday night, the Bison host their first home game of the season versus Class 11B Bennett County. Kickoff is set for 6 p.m.