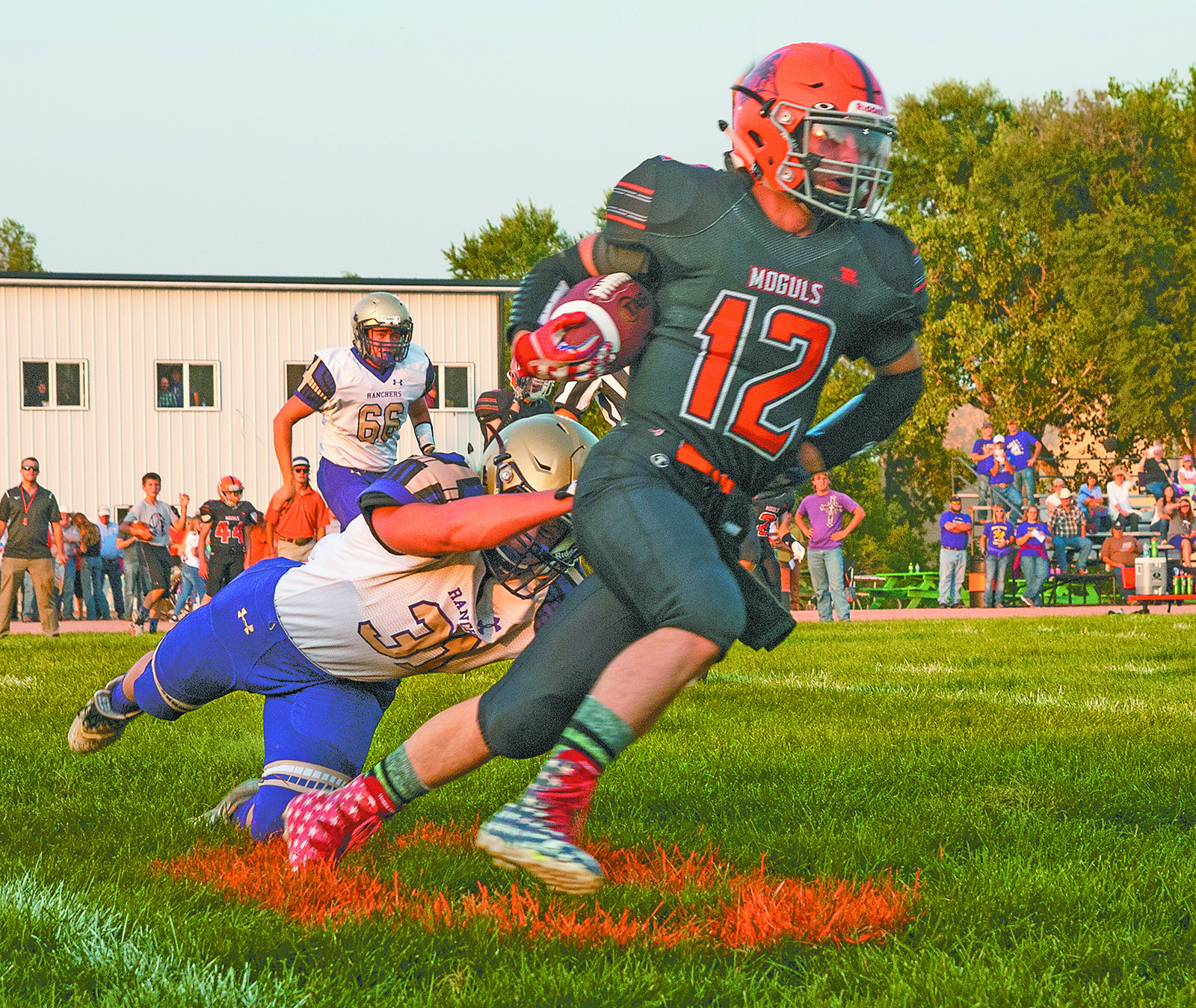 EDGEMONT – After not playing a single home game last season due to the school's new Cody Barker Memorial Field and track being under construction, the Edgemont Moguls football team was back on their home turf last Friday night, Aug. 17, as they hosted the Harding County Ranchers in "Week 0" of the 2018 Class 9B schedule.

Prior to kickoff, the many volunteers who have helped make the new field possible were recognized with an on-field ceremony. And while it was good for the Moguls to be back in action again, the final outcome fell heavily in favor of the visiting Ranchers as they won in a runaway 56-6.

“We came out and played a very good first quarter,” said Edgemont head coach Dustin Christensen. “We showed what we could do and we moved the ball down the field against a tough Harding County team. We had a chance to take the lead when we were down on our goal line, however, we could not execute and punch it in.”

“Overall, we played with Harding County, but we have a young team this year, especially with our offensive line,” added Coach Christensen. “The one thing that hurt us and got us out of the game was that we had 12 total penalties for 95 yards that hurt us. We will be working on staying disciplined and being relentless in practice. I don't think Harding County expected us to come out like we did as I think they thought they would have the game over by half, in which we played into the fourth quarter with four minutes to go.”

Sophomore quarterback Caleb Simons led the team with 179 yards rushing on 22 attempts and scored the team's only touchdown, which came in the second quarter. Senior running back Ryan Simons also ran the ball very well , according to Christensen. He had 35 yards on the night.

“We had a great rushing attack as we carried the ball 32 times for 223 yards,” Coach Christensen said. “On defense, Dalton Reutter was a stud, as he had eight total tackles for us.”

Caleb Simons also added six tackles of his own, followed by junior Brennan Hanes with five and freshman Riley Waite with three. Hanes also had 44 yards for the Moguls on special teams by returning kicks.

“On defense, we will need to work on reading the play and gain tackling as a whole team,” added Christensen. “This is Game 1 of the season and we have seven more games to go. I tell players to stay positive and that it does not matter how you start the season, but how you end it. I truly believe we have a chance to make the playoffs this year and Harding County could be the first team we see in playoffs.”

This Friday the Moguls will host Crawford, Neb., in the first six-man football game to be played in the state of South Dakota in many years. Kickoff is set for 7 p.m.

ABOVE: Edgemont senior Ryan Simons catches a pass from his younger brother Caleb Simons and then cuts around Harding County linebacker Robert Hansen for a first down.

LEFT: Town and area residents and volunteers who helped create Edgemont High’s new football field stand before football fans as the new field is dedicated last Friday evening during pre-game ceremonies before the season opener against the Harding County Ranchers.