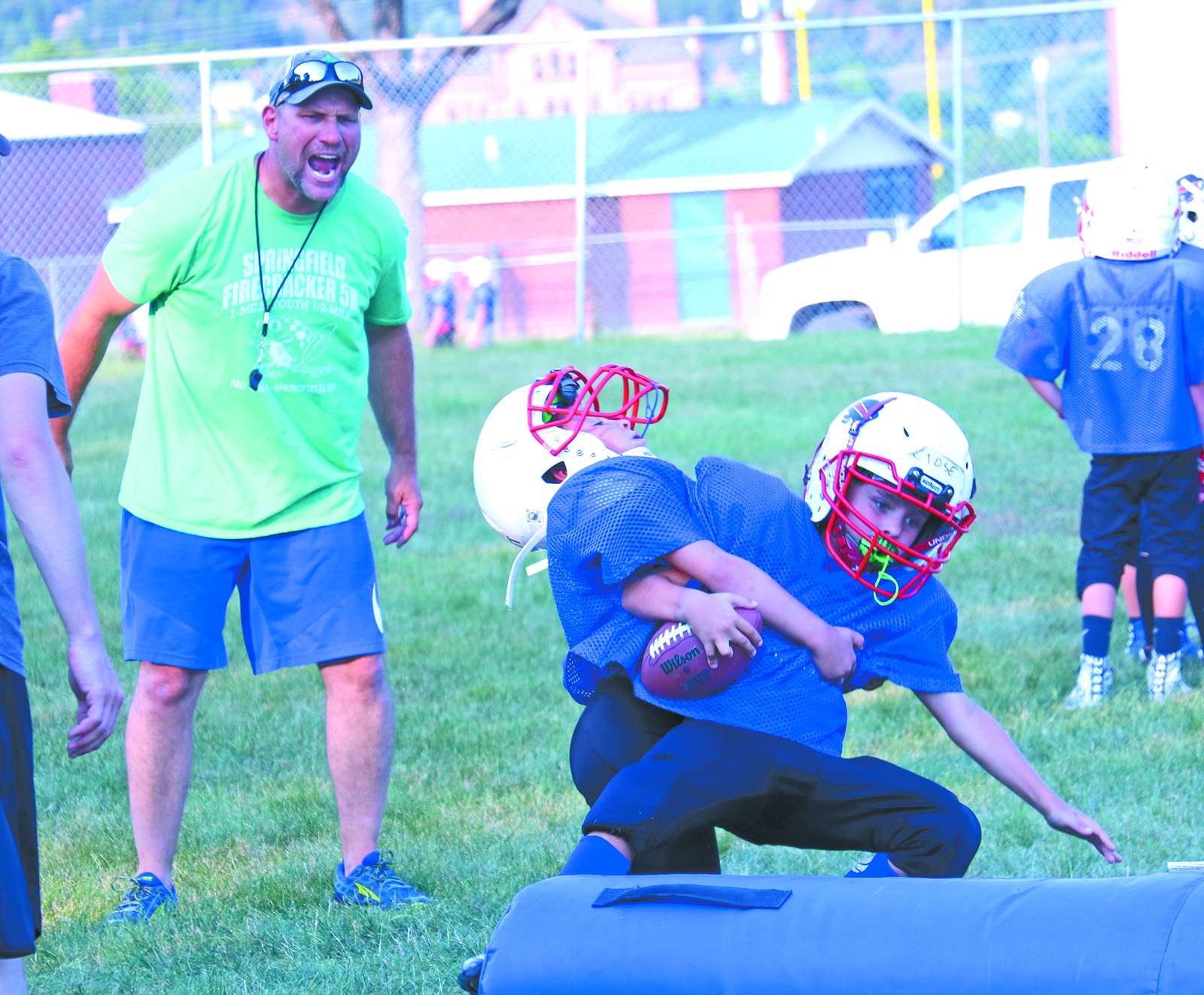 HOT SPRINGS – The sounds pads popping, whistles blowing and little siblings playing together on the sidelines as parents can be seen sitting in lawn chairs nearby, has returned to the practice field near Woodward Field, as the Hot Springs Bills season has gotten underway again, in anticipation of the program's fifth year as part of the Black Hills Youth Football League (BHYFL).

Commissioner of the Bills since the program's inception, Mike Close, who is also Hot Springs Chief of Police, said he is very pleased with this year's numbers on the Bills' three teams, which includes the Mighty Mites (grades 1-2), Junior PeeWees (grades 3-4) and PeeWees (grades 5-6).

While taking a brief moment away from helping to coach the PeeWee team on the high school practice field behind the Woodward Field grand stand last Thursday evening, Close said his team of older boys, with whom some have the option of also playing with the middle school's seventh grade team, features a total of 16 players. That number, he said, is one of the largest group of PeeWees that they have had.

Other PeeWee coaches include Jesse Nase, Jeff Janis and Shawn White. The team is sponsored by Sperlich Consulting.

The youngest group, known as the Mighty Mites, features a number of  players in the very first year of organized football. They number 16 total, which Close said, is one of the largest groups of Mighty Mites in the entire BHYFL. Due to so many other teams being short of Mighty Mite players, Close said they will be playing in some six-man games this year. The team is sponsored by Fall River Health and coached by Ryan Cuny, Darrel Reinke, Matt Tschacher and Zac Bell.

While some area Black Hills teams, like the perennial powerhouse Wall Eagles, have seen their individual numbers drop as of late, the Bills, according to Close, have been seeing consistent to growing numbers since joining the league five years ago.

Close attributes the continuing success of the program to the highly positive relationship his coaching staff has with all of the parents and the trust the parents have in allowing their boys to be part of the program. He pointed to the Bills' large Mighty Mites team as an example of how parents of past Mighty Mite players have essentially endorsed the program for up and coming parents of first and second graders to give it a shot.

He also said the Bills have a strong social media presence which allows parents to always be informed of schedule changes and team news.

Now in its fifth year, the impact of the Bills program will make its first appearance this year on the varsity level at Hot Springs High School, as this year's freshman class contains a hand full of players who at one time were Bills.

While success on the field and qualifying for the BHYFL playoffs is certainly a motivator for Close and his other fellow Bills coaches, he said it really is more about the ability to coach the fundamentals at an earlier age, which will hopefully have an impact on the boys' future, as a member of the Hot Springs Bison, Edgemont Moguls or Oelrichs Tigers high school teams.

Hot Springs Bison head coach Ben Kramer said the biggest thing he has noticed so far this year with his incoming freshman is that they appear to just be more comfortable with the game.

“You can see it in some of the drills,” Kramer said. “In tackling drills, we are spending less time on coaching form and things like head placement.”

This, Kramer said, is a significant factor in the overall safety of the game.

Close said this year's Bills program features one player from Oelrichs, but the rest are from Hot Springs. While there has been some players from Edgemont in the past, he wishes there were more from the surrounding communities.

The Bills practice weekly at the high school on Monday, Tuesday and Thursday from 5:30 p.m. to 7 p.m. Their first live action against other teams will be in Rapid City on Thursday, Aug. 25, at a Jamboree event where teams will play in four “mini games” against one another.

The seven-week regular season kicks off Sept. 8, followed by one week playoff and then the Super Bowl. Last year, both the Bills Junior PeeWees and Mighty Mite teams qualified for the leagues' semi-final playoff round.