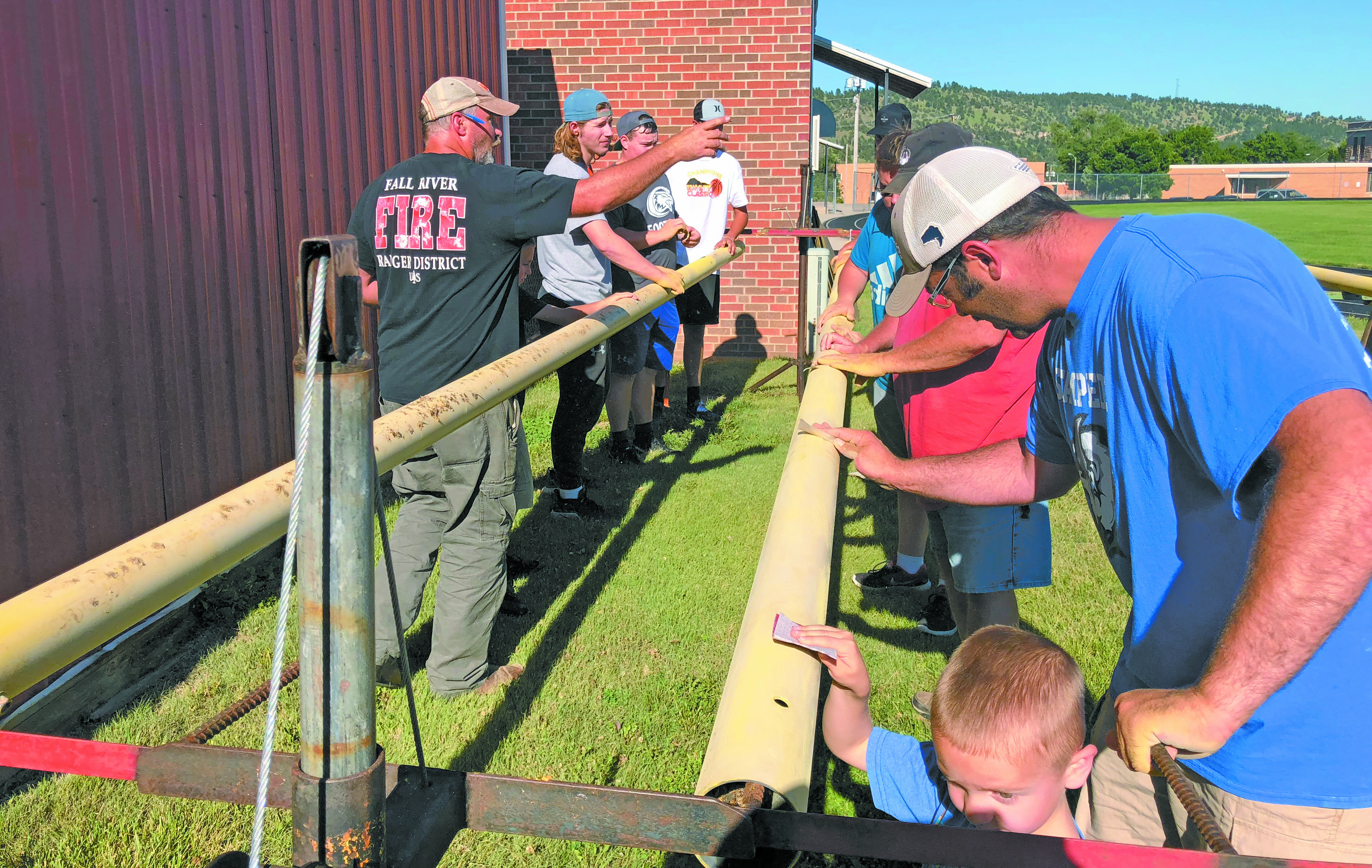 HOT SPRINGS – As one drives on University Avenue, past the Hot Springs school campus, your eyes naturally drift to the north towards Woodward Field, which provides the friendly, home confines for the the Hot Springs Bison football team each fall.

With its iconic stone gateway dedicated to the late Harry R. Woodward, the near-life-sized fiberglass Bison mounted atop the crow's nest on the top row of the grandstand, and the field's 100-plus yard expansion of lush green grass – the school's football stadium is one of Hot Springs' many well-known landmarks of the community.

Recently, a pair of new additions – NFL-style goal posts – now stand bright and tall at either end of the football field, both of which not only give the gridiron a more sophisticated and updated look, but will also add to the safety of the players during the home games.

The story as to how the new goal posts came to be is one that will forever be part of the history of Hot Springs High School, and is one that was started – and mostly completed by – Hot Springs Bison alumni, and at no cost to the school district.

Literally hundreds of donated hours of labor, and a few thousand dollars of donated materials, went into the project, which began with HSHS Class of 1977 alumni Carlos Cornay. During his high school playing days, as a sophomore, Cornay helped lead the 1974 Bison football team to the school's first and only state championship.

As opportunistic as he was on the football field then, Cornay, formerly a resident of Yankton but now living in Sioux Falls, was likewise as opportunistic this past February when he learned Yankton High School was rebuilding their stadium and planning to do away with their old NFL-style goal posts. Only about 15 years old, the goal posts were still in good shape, but just not part of the plans for Yankton's new turf field.

After negotiating a price to purchase the goal posts from Yankton High School, and getting the blessing from the Hot Springs School District to donate them to his alma mater, Cornay then began to make arrangements with current Bison football head coach Ben Kramer and some other Hot Springs High School alumni to bring them across the state.

Earlier this spring, Ryan Cuny of Hot Springs, on a planned trip to East River, made an extra dip down to Yankton on his way home and loaded the goal posts onto a flatbed trailer. Once in town, many others got involved in the project, and not only adults, as several members of both the youth Hot Springs Bills football team and older Hot Springs High School Bison football team, helped sand off the old paint and prepare the goal posts for a bright new yellow coat of paint, applied by Lester and Kody Hagen of Hot Springs.

But as it would turn out, getting the goal posts here and then getting them cleaned up to look nice, was just “the nose of the football,” to put it into sports terms.

Enter local contractor Kel Lorenz, who according to fellow volunteer contractor Don Olstad, “was the right man to get the job done.”

Lorenz contacted the company and was able to purchase the blueprints and materials needed to install the goal posts at Woodward Field. Lorenz said the company was hesitant to provide the blueprints until it could be proven that the goal posts were indeed one of their own, because they did not have a record of the sale to Yankton High School in their accounting system.

But thanks to Lorenz being able to identify the company's distinctive crossbar support design, and the fact that a longtime backroom employee of AAE actually recalled from his memory the sale to Yankton High School, the connection was made and the blueprints and materials were sent.

Over a period of nearly two months – from when the anchor bolts and hardware were ordered in May to when the sod was installed over the top of the goal posts' anchor hole in early July – Lorenz, along with a team of various volunteers, worked tirelessly to square up the field and install so that the goal posts were positioned precisely and anchored firmly. Lorenz said he was very impressed with how perfectly the company's blueprints were spot-on.

Each new goal post features a single galvanized steel goosenecked center post, which is anchored by four 33-inch bolts in 3.5 yards of concrete and offset six-feet behind the end line. Woodward Field's former H-shaped goal posts, made from a galvanized well pipe, welled together and painted white, were mounted directly on the end line and would sometimes present a hazard for players who wandered too deep into the end zone, not to mention that there were two of them making it twice as likely to be in the way.

The new aluminum crossbar itself is 10-feet high above the ground and 23-feet, 4-inches wide, which is the same as Woodward Field's former goal posts and matches current high school football regulations.

While its unclear exactly how old Woodward Field's former goal posts are, Lorenz believes, based on his own examination and discussing with other alumni, that they were likely modified in the 1970s by students in a welding class – perhaps to make them wider to allow for new goal post regulations – but built many years before that.

“They look amazing,” said an excited Coach Kramer, who can't wait to see his team playing between the posts this coming fall. “A lot of good people put a lot of time into making this happen, and the players are very appreciative. Anytime we're able to get the kids new equipment, or anything new, they respond and get excited.”

Lorenz, who every football season wanders the sidelines and photographs the Bison at all of their home and away games, is also excited to see the goal posts in action. In addition to looking good, Lorenz said the new goal posts will also make the game safer as well as take away some of the guesswork by referees in determining if a field goal attempt is good or not, since the uprights now extend another 10-feet higher into the air.

But as excited as he was for the upcoming football season, he was even more appreciative of the many volunteers who stopped by over the course of the project to lend a helping hand. In addition to the aforementioned names like Ryan Cuny, Don Olstad, Ben Kramer, Lester and Kody Hagen who helped, Lorenz said others included Randy Scott, Terry and Barry Fleharty, and Cory and Nathan Gwin.

Some of the others who were a part of the project, in addition to the many youth football players for both the Bills and the Bison, were Matt Tschacher, Mike Close, Jade Konst, and Marty Schommer, to name a few.

Several Hot Springs High School Bison and Hot Springs Bills youth football players got together one evening to help sand down the new goal posts to prepare them for a fresh coat of yellow paint.