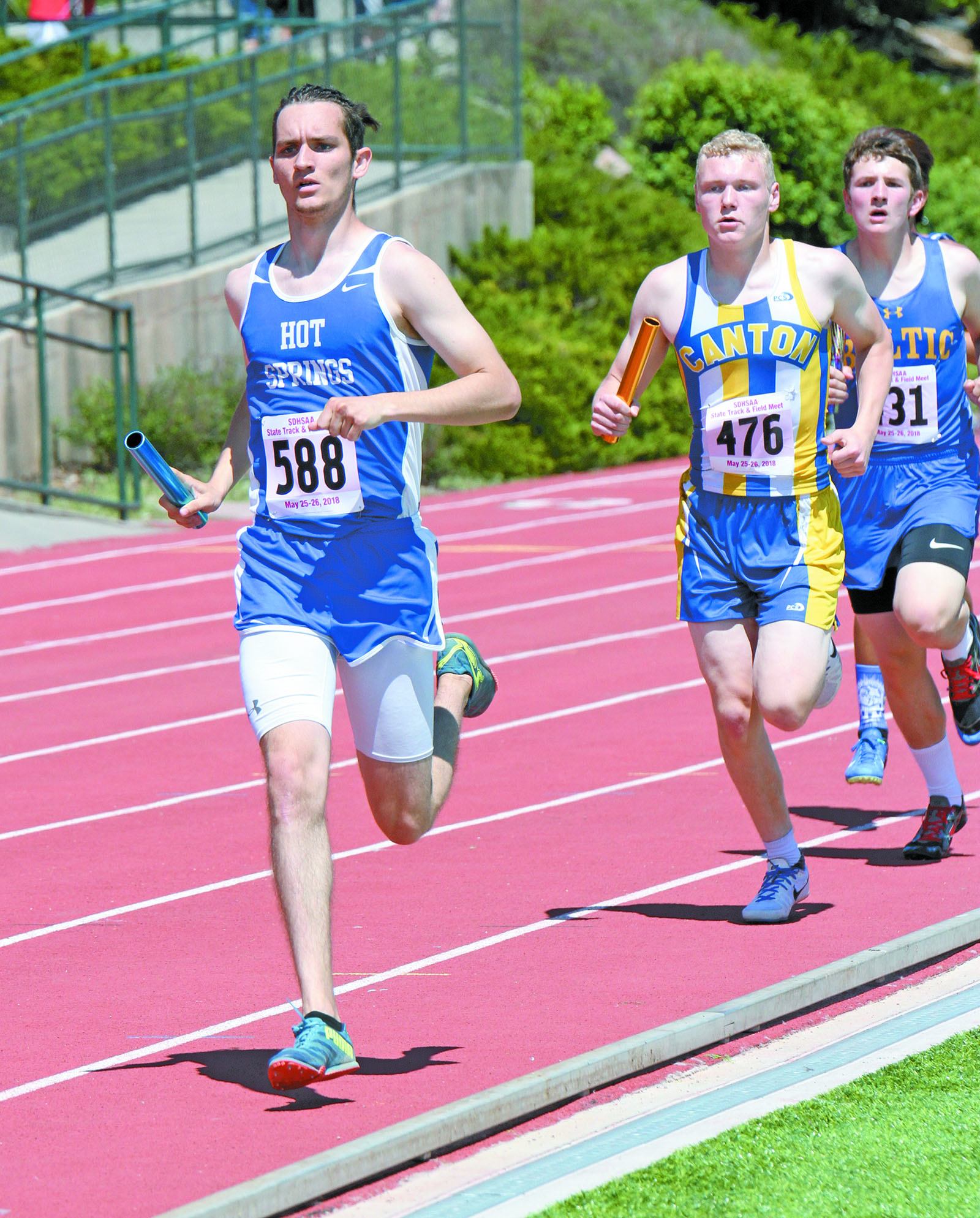 No matter how hard you try, coaches cannot control the weather, so after going through almost the entire season with below average temperatures we finally hit two days of above normal temperatures. But guess what? It’s track season and we don’t hide from whatever is in front of us.

The first day in Spearfish saw both relay teams and both throwers compete on the campus of BHSU. Leading off the day was Garret Heil in the shot put event. This was Garretts first trip to state and it looked like it, as Garrett finished the day in 17th place with a throw of 38-00.

The 4x800m relay team was next, running in the first section of this race, the team of Josh Stanley, Keaton Bissonnette, Adam Consoer, and Tyler Winscot placed third in their section in a time of 8:45.27. We were off our best time of the year by about 3 seconds but most impressive of the runners was Keaton. An 8th grade runner, he ran his leg well today and kept us in the race. Josh, Adam and Tyler ran with their usual grit and determination and overall the team placed 10th. We were ranked 17th coming into the meet so we did improve our placing.

Marcus Harkless then competed in the discus event. Marcus really came on at the end of the season to secure a spot at the state meet, and as a frosh and first trip to state, again nerves played a big part. Marcus finished in the 19th spot with a throw of 108-08. Our final group of the first day was the medley relay team of Thomas Massa, Gavin Heil, Matt Norton and Tyler Winscot. Again we finished 3rd in our section and 11th overall with a time of 3:52.91; above our best run of the year.

You can look at this as not a very successful meet however; you also have to look at who we sent and what has been their previous experience at state. No one on this team competed at the state meet last year. I would say we had a good meet, we improved in our rankings for both relay teams; Matt set his PR at the state meet, and for the majority of these kids, who should hopefully have another run at the state meet next year, gained a ton of experience. If we are truly going to be competitive, we have got to get more kids out. Unfortunately, we have way too many activities going on at the same time and one that not only competes in the spring but also in the fall. We do not have the enrollment that the Rapid schools have, why are we trying to be like Rapid City?

One last note; these kids do not make it to state without the dedication of my coaching staff. They do an excellent job of getting the kids ready to compete every day. Amanda Scott, Jim Hayes, Neil Hohentanner, (sorry), Aaron Noteboom, Todd Phelps. Special thanks to Josh Scott, Blake Schumacher, and Coach Z, for volunteering their time in an effort to help these athletes reach goals not thought reachable. I also want to thank those athletes who are willing to listen, willing to go through the grind of practice and have the character to not only make it to practice every day but also have the character to do what is necessary to maintain a working relationship with the coaching staff.

Hot Springs senior Josh Stanley competes in the 4x800m relay during the first day of the state meet last week in Spearfish.