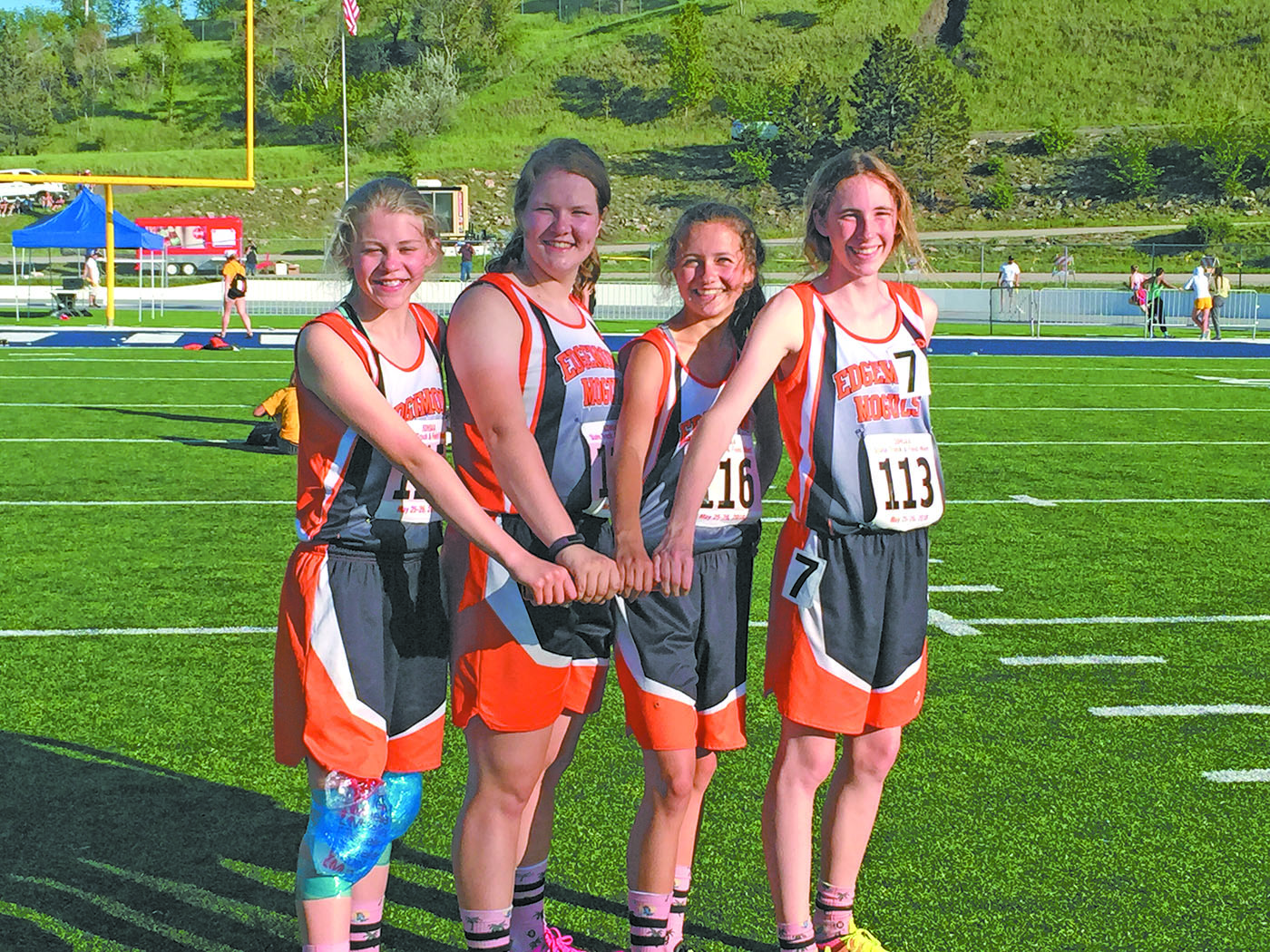 RAPID CITY – After sending seven athletes to compete in seven events in Spearfish and Rapid City during last week's State Class “B” Track & Field Championships, Edgemont head coach Joe Martin said he was extremely pleased with his team's results, despite not coming home with a top-eight medal.

What did happen however, were a number of new Personal Records (PR) set as well as a new school relay record, and proof that the Mogul athletes can compete against the best in the state.

“We went into State a young team with optimistic expectations and came out right on target,” said Coach Martin. “The kids competed well against Class B, themselves, and history. Friday began with a PR in the 100-meter hurdles and ended with a school record in the girls 4x400.”

Edgemont's 4x400m relay team consisted of three middle schoolers in seventh-graders Bridget Neville and Peyton Ostenson and eighth-grader Morgan Peterson, along with junior Abby Tidball. Their time was 4:32.28 and was good enough for fifth place in their heat of the preliminaries on Day 1.

The previous Edgemont school record of 4:38.31 was set way back in 1981 by Vonda Cummings, Sheila Cummings, Ann Hollenbeck and Deanna Frye.

The girls' medley team consisted of Neville, Peterson, Tidball and freshman Sarah Barker and placed seventh in their preliminary heat in a time of 4:54.61.

“Our girls team was one of the youngest to compete in all classes,” said Coach Martin. “We were able to improve our 4x400 time by 10 seconds and Medley by 4 seconds from our Region times. We ran our fastest 100m hurdles race of the season and gained valuable experience in the 400m dash. All eight girls lettered this season and return next year.”

“Our boys set PRs in the long jump and 3200m run,” Martin said. “We missed finals by 0.75 inches in the long jump, finishing as the top freshman in the event. Our two-miler shaved 61 seconds off his Region time on his way to an impressive showing in his second appearance at State in the 3200. On Saturday we ran the 1600 in the same time we ran at Regions to cap off a fantastic 2018 season with three letter-winning boys set to return next season.”

Coach Martin added that the entire community of Edgemont is proud of what the kids on his team were able to accomplish this season.

“In 12 years of coaching track, I haven’t seen a group of kids in the weight room as much as these kids have been over the past three years,” Martin said. “The girls will finish the decade as dominant as they began it, while the boys are one year away from once again standing on the podium in Sioux Falls.”

Coach Martin said that Edgemont won its only state championship in any sport 60 years ago claiming the Class B Track title in 1958.

The team recently held its track awards night also, last week. Following are a listing of the honors presented: