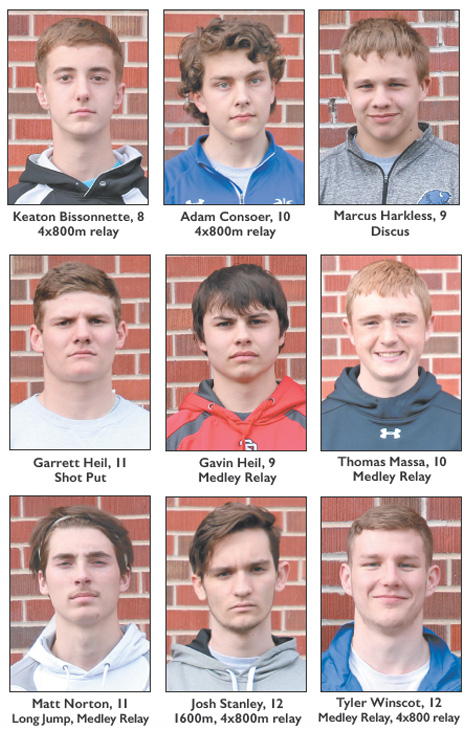 Sometimes you just have to wait long enough for the kids with the right attitude and work ethic to come along to fill out a more balanced state qualifying team. Marcus Harkless and Garrett Heil were the first track athletes to qualify for the state meet, at last Thursday’s region meet in Belle Fourche; more importantly both these kids are in the throwing events. Marcus must have been studying the history of the 1990-91 Twins, as he just made finals as the 9th place thrower in the discus, but then came out of the finals in first place (128-10) and a trip to state. Garrett went the opposite way as he was in the top 3 for finals but ended up getting edged out but came back in the shot event with a 2nd place finish (40-01).

Adding to the individual total is Josh Stanley, placing 2nd in the 1600m (4:49). This was not Josh’s only qualifying finish of the day as he also led the 4x800m relay to a 2nd place finish (8:42). The story of this race was the all out effort by Tyler Winscot, who ran a 2:03 split on the anchor leg edging out Belle Fourche for the 2nd spot. The team also recorded a PR of 8:42. Keaton Bissonnette and Adam Consoer were the other members of the team. Our last individual qualifier is Matt Norton, who jumped a season-best of 19-09 in the long jump to finish first.

We also qualified another relay team of Thomas Massa, Gavin Heil, Matt Norton and again Tyler Winscott. The last two legs of the medley are the key spots and Matt did not disappoint as he held off a couple of challenges at the end of his 400m run to give Tyler a chance to stay up on the leader and eventually pull away and maintain the second place finish (3:58).

We did have one big blow during the meet and it was in the 4x200m relay; Hot Springs was DQ’d after an exchange zone violation between Thomas and Gavin with Matt and Tyler running the back two legs. This happened early in the meet, and yes it was the same four who came back later and qualified the medley relay. It just goes to show you the effort and willingness to come back and fight that the majority of the track kids have.

We had others who did well, setting PR’s but not qualifying; we are just as proud of these kids. Caden Shanklin placing 3rd in the shot and 4th in the discus, Cammie Crosby was 4th in the 100m, and Janelle Brock was 5th in the shot put. Thomas Massa finished out the day with a 7th place finish in the 400m race.

Now I haven’t told you the full story. We were delayed by lightning three different times during the meet with a couple of delays reaching past 60 minutes. The amount of time spent on the bus, with warm-up after warm-up and the job that these kids did all day was tremendous. I have to give them a lot of credit for the patience and effort each showed throughout this day, qualifying or not, these kids really proved how to represent the community well.

Day 1 of the state meet will be held in Spearfish this Friday, with both relay teams and Garrett competing. The first event is the 4x800m relay which will start at 11:30 a.m, if we can deal with the weather and no changes occur.

Saturday’s Day 2 events will be held Rapid City with Josh Stanley and Marcus for sure competing. If the medley team does well on Friday, they will have a run at a state title on Saturday as well.