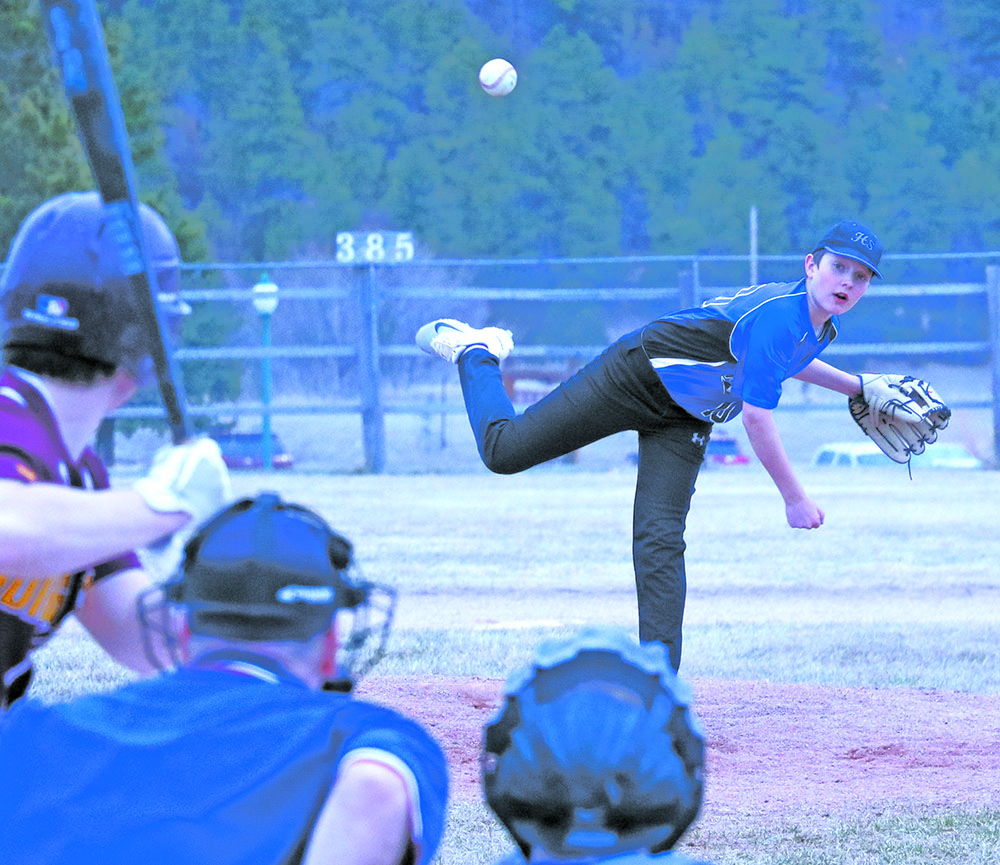 HOT SPRINGS – The Hot Springs Bison baseball team had by far and away its best game of the season last Tuesday, May 8, at home versus Todd County.

Despite ultimately losing in extra innings (nine total innings) by a score of 8-11, Hot Springs head coach Mike Remington said he had, “never been more proud of a team than the team we put on the field last Tuesday.

“We played with only nine players, two of them were seventh graders, one hadn't practice all year but was on the roster, and three were starting at positions they never played before,” Coach Remingston said.

And to make matters worse, Remington said after the first inning was complete, the team's third baseman took one in the eye and he moved to centerfield. Then the centerfielder pulled a muscle and moved to third base. Then the third basemen, Steven Wingler, then took a ball off his hand while at bat, but refused to leave the game because of his injuries.

They would later found out that he broke his hand, Remington said.

To start the game, Hot Springs took an early 1-0 lead in the first inning when Austin McMillin stole home with two outs. Todd County however answered back in the second inning to go up 4-1.

Hot Springs battled back in the fourth innning to score four runs and regain a 5-4 lead.

“Steven Wingler started the rally with a single, followed by Austin McMillin singling and then TeeJay Atwood tripled to score both of the base runners,” Coach Remington said. “Zane Cope then singled home TeeJay and the Jace Bilbrey singled home Zane to complete the first comeback.”

Hot Springs' Logan Barndt and Steven Wingler had consecutive singles with one out in the bottom of the eighth. McMillin then walked to load the bases, which eventually allowed Barndt to scored on a wild pitch.

The next batter for Hot Springs then struck out, but with runners on second and third and down to their final out, Zane Cope singled to centerfield to score the two run needed to tie the game at a score of 8-8.

But in the top of the ninth, however, Todd County again scored three runs which the Bison could not overcome in the bottom of the ninth.

“This was our single highest output for runs and a group that played hard, had fun, and never quit,” said coach Remington. “This group did whatever was asked of them and more. I wish more students in the community would put forth the effort that was shown at that game. This was a group that fans, school, community, and their parents should be proud of.

“I've been coaching for over 20 years at a variety of levels in many different sports and that is a group of kids that I will never forget. They played it like they would never get a chance to play the game of baseball again. I am very proud of you.”

Hot Springs seventh-grader Jace Bilbrey pitches versus Lead-Deadwood in a game played earlier this year at Butler Park. Last week, Bilbrey pitched six innings to help lead the Bison in their best outing of the season versus Todd County.