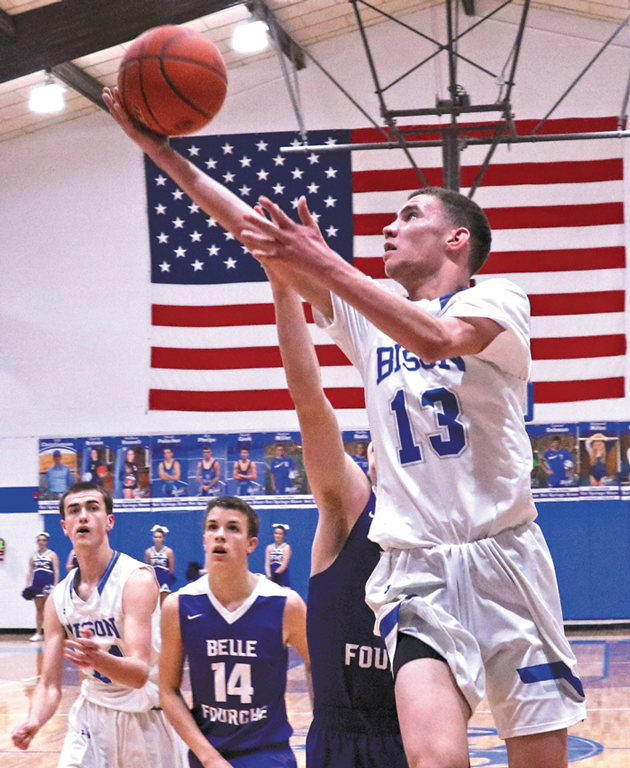 HOT SPRINGS – Held scoreless through more than half of the first quarter, the Hot Springs Bison boys' basketball team came back from a 0-7 deficit to go on and win by a score of 71-60 over the Belle Fourche Broncs in the Region 8A semifinals last Friday night at Case Auditorium. The victory propelled Hot Springs to the Round of 16 for the second straight year – one win away from punching their ticket to the state tournament.

After starting the game in a 0-7 hole, the Bison finally got on the board with about 3:30 remaining in the quarter and then rattled off seven unanswered points in just over a minute, to tie it up 7-7. The quarter ended with junior Thane Lockhart hitting a three-pointer at the buzzer to put the Bison up 10-9.

The second quarter saw the two teams go back-and-forth with Belle regaining the lead 19-17 at about the midway point.

Coach Noteboom went to his bench and got a spark from junior Kelton Harris, who scored eight straight points and helped give the lead back to the Bison heading into halftime, by a score of 29-21. Harris ended the game with 18 points.

The Bison were led by junior Logan Barndt with double-double, including 21 points and 10 rebounds. Lockhart meanwhile added 10 points with six assists. Senior Logan Gooder had a team-high 14 boards.

Aside from a couple late-quarter scoring runs executed by the Broncs, the second half was mostly all Hot Springs as the Bison went up by as many as 25 points late in the third quarter, before Belle cut it to 20 with a three-point bucket at the buzzer to close the period.

The fourth quarter again ended with the Broncs making it interesting as the Bison appeared to let up on the gas a bit, while Belle Fourche continued to fight. The Broncs ended the game on an 8-0 run in the final minute which cut Hot Springs' margin of victory from 19 points to only 11.

“A lot of credit goes to Belle Fourche,” Coach Noteboom said. “They played really hard for 32 minutes and at times we failed to meet their intensity.”

The Broncs were led by Kelby Olson, who scored more than half of his team's offense, with a game-high 35 points.

“Overall I was happy with our performance,” added Noteboom. “Anytime you can get a win in March you have to be happy about that. This time of year, the focus is to survive and advance and we were able to get it done.

“Since the end of last year’s season, our boys have worked very hard to make it back to the Sweet 16 and get another chance at a State Tournament. With this win we are one game away from our ultimate goal.”

The state's Round of 16 games were originally scheduled to take place Tuesday, March 6. However, due to extreme winter weather conditions taking place across the state, all of those games got moved to Thursday, March 8.

Hot Springs junior Logan Barndt goes up for a baseline shot as he rolls the ball off his fingertips late in the game last Friday night in Case Auditorium, versus Belle Fourche in the Region 8A semifinals. Barndt finished the game as Hot Springs' leading scorer with a double-double, including 21 points and 10 rebounds.