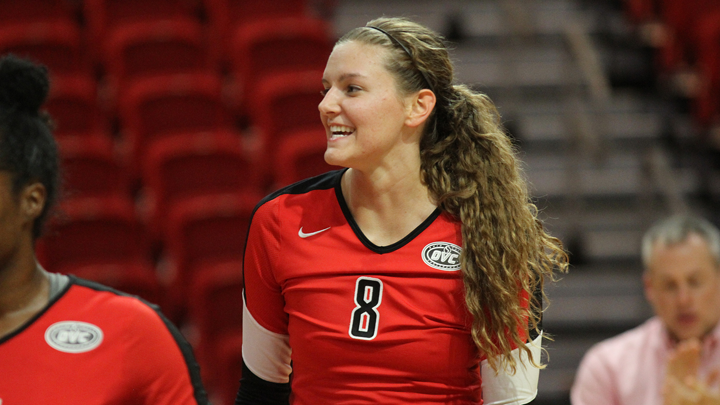 Bilbruck, a junior at the NCAA Div. 1 school in the Ohio Valley Conference, is one of 234 athletes from 90 colleges across the country attending the tryout for a spot on the U.S. Women's National Team and the U.S. Collegiate National Team program. The breakdown for the tryout includes 60 outside hitters, 50 middle blockers, 48 liberos, 44 setters and 32 opposite hitters.

"I am thrilled to have Haley representing SEMO at the U.S. Women's National Team Open Tryouts," head coach Julie Yankus said. "This will be a once in a lifetime experience for her and I know she will excel in this environment. The U.S. Women's National Team staff runs the tryout so this is an amazing opportunity for Haley and our program. The national exposure of this event will have a positive impact on our school and our volleyball program. Haley will be an excellent representative of the SEMO Volleyball Program."

Bilbruck appeared in 31 matches during the 2017 season for the Southeast Missouri women's volleyball team. She was fourth on Southeast with 166 kills and was third on the Redhawks with 74 total blocks.

Friday's first session goes from 3-9 p.m. CT, while Saturday's sessions are at 9 a.m. CT (focus on serve/receive and individual work) and 3 p.m. CT (middle-centered and out-of-system focus). The final session on Sunday begins at 8:30 a.m. CT with tournament style play; along with 16-18 athletes selected by the U.S. Women's National Team staff to participate in a "USA" training session. The Sunday session wraps up at 11:30 a.m. CT.

All sessions minus the USA training session on Sunday morning will be streamed live and available for free at www.TeamUSA.org. USA Volleyball will use #USAVtryout as the event hashtag for photos, notes, quotes and stories posted to its social media platforms Facebook, Twitter, Instagram and Snapchat under the handle @usavolleyball.

Haley Bilbruck appeared in 31 matches during the 2017 season for the Southeast Missouri women's volleyball team. She was fourth on Southeast with 166 kills and was third on the Redhawks with 74 total blocks.