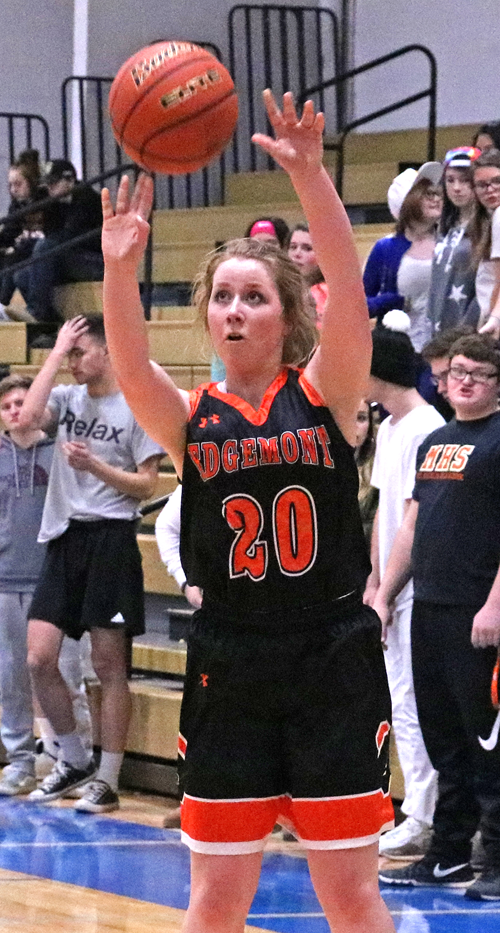 OELRICHS – The first round of the Region 7B girls basketball playoffs saw fellow Fall River County foes Edgemont and Oelrichs facing off, with Oelrichs earning a 40-34 win in front of their home fans on Tuesday, Feb. 20.

With a 22-16 lead at halftime, Oelrichs saw Edgemont come back and close the gap with a strong third quarter which narrowed their lead to 28-26. Oelrichs however outscored the Moguls 12-8 in the fourth quarter to earn the six-point victory.

Junior Natasha Swiftwater led the offense for Oelrichs with 17 points, followed by a trio of players with six points apiece, including senior Kyla Crow, eighth-grader Memoree Eagle Louse, and senior Davida Respects Nothing. This was Oelrichs' third win over the Moguls this season. 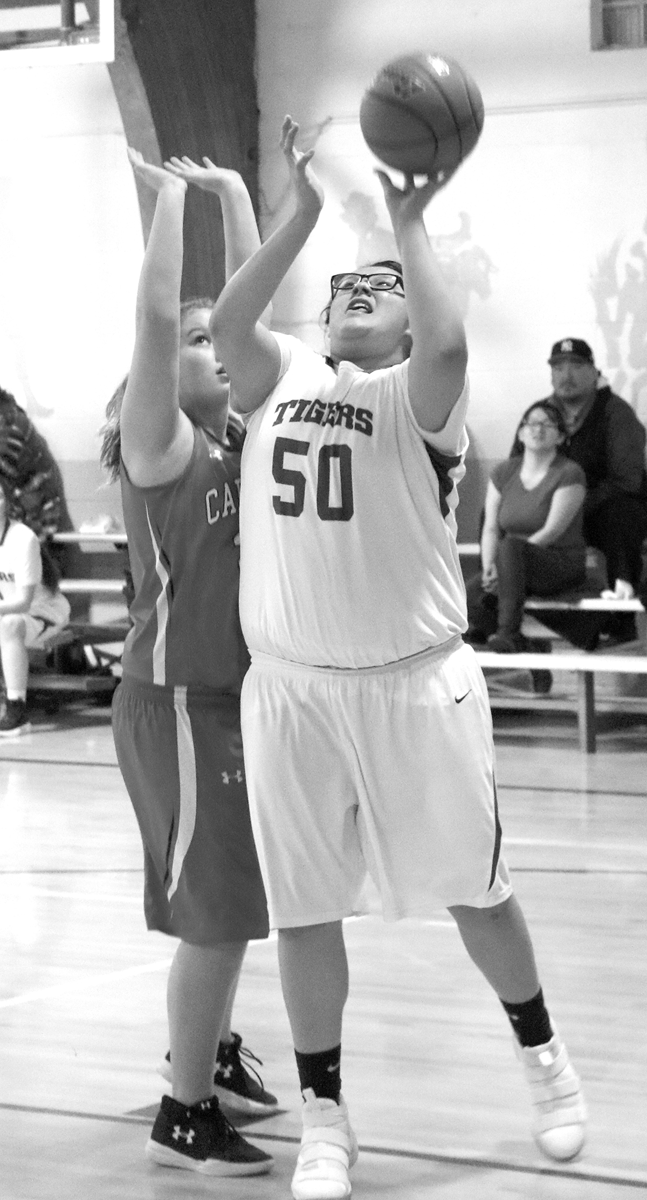 “First, I would like to congratulate the Oelrichs Lady Tigers,” said Edgemont girls head coach Lane Ostenson. “They played a great game and made the adjustments at the end to win the game.”

Avery VanEaton had another great night and kept us in the game but we couldn't get it done for her,” Coach Ostenson added.

Following their first round victory, Oelrichs advanced to the next round where they met the tall task of taking on the top-seed in Lower Brule, who defeated the Tigers 82-40.

“We had a great season overall as we finished with a winning record and competed with some great teams,” said Oelrichs head coach Dale Pine, Jr. “There were a lot of teaching moments in games and I'm excited for the off-season. We plan to have an off-season program with team and individual camps as well as making sure we keep the girls motivated to come out for the team again next year.”

Coach Pine added that they finished with 11 players on the team this season and also had a full-time junior varsity team this year.

With the top-three point scorers on the team all as underclassman, Coach Pine is confident about the future of the program.

“We want to continue building and hope to be even more competitive in our region next season,” he said. “We've asked some top tier teams such as Todd County and Red Cloud to keep us in mind if they have any openings next season. I think we are going in the right direction. Our seniors Kyla (Crow), Davida (Respects Nothing), and Darrelyn (Standing Soldier) really did a good job buying into how we wanted to play and left a good standard for the girls to follow in the future.”

Edgemont's Coach Ostenson was also pleased with his team's season, and is looking forward to the future of Lady Mogul basketball.

“I thought the Edgemont Lady Moguls had a great year,” he said. “My goal for the team was to end above .500, but go a little deeper in the post season. We didn't reach these goals but with the group coming up, I think we will have to set our goals a little higher for next year.”

“Avery's shoes will be difficult to fill and she will be missed,” Coach Ostenson added. “I can think of three or four that are waiting and wanting the opportunity to try. We are a young team with only one senior this year, I can't wait for what the future brings for the Edgemont Lady Moguls!”

Senior Avery Van Eaton was Edgemont's leading scorer this past season with 280 points, which was an average of 14.4 points per game.

Davida Respects Nothing goes up strong to the hoop versus Bison earlier this season in Oelrichs.