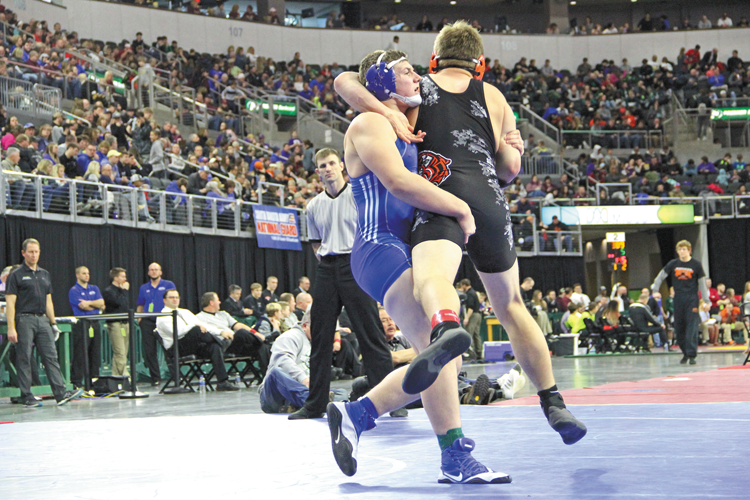 SIOUX FALLS – With five Hot Springs Bison qualifiers, and two from Edgemont as part of the combined Custer/Edgemont team which included six more qualifiers, the two Southern Hills schools combined to put five wrestlers on the podium of this past weekend's 2018 State Class “A” Wrestling Championship in Sioux Falls.

Hot Springs had a pair of medalists in junior Kody Hagen (145 lbs) and Garrett Heil (182 lbs) who each placed sixth, while Custer meanwhile had three medalists in Levi Mines (152 lbs) who placed fourth, Jestyn Woodward (106 lbs) who was seventh, and Eli Mines (145 lbs) who finished eighth.

“What's nice about this Hot Springs group is we get all of them back,” said Hot Springs head coach Ray Ringstmeyer. “This state tourney experience is valuable. It's the final tourney of the year, but yet still a learning process. We learned once again we have to be more offensive and aggressive.”

While Hagen (41-11 overall) and Heil (38-10 overall) both finished in sixth of their weight class, they each took different routes to get there.

Hagen, who finished with a 2-3 tourney record, began his first-ever state tournament with a pair of victories on the first day to qualify for the semifinals the following morning. His Day 1 wins included a 9-1 major decision over Zach Johnson of Bon Homme/Scotland/Avon and then a 2-1 decision over Michael Witte of Flandreau. 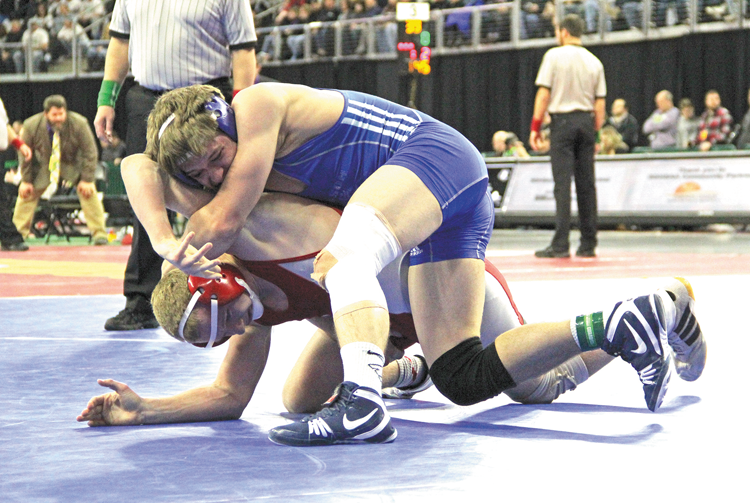 His semifinal match pitted him against the top-seeded, and eventual state champion, Paul Lauck of McCook Central/Montrose who earned a 5-2 decision over Hagen. With the loss and moving over to the consolation side of the bracket, Hagen then suffered a knee injury in the first period versus Landon Sivertsen of Miller/Highmore-Harrold  which forced an injury default loss.

With his knee heavily wrapped up, Hagen was however able to battle back onto the mat in the fifth place medal match to face Joey Wheeler of Potter County, which ended in a hard-fought 4-2 decision in favor of Wheeler.

Heil went 3-3 in his second state tournament, after qualifying last year for the first time as a sophomore. He won his first match by defeating fellow Region 4B foe Tee Allen of Bennett County with an 8-4 decision. His next match however came versus eventual state champ Aidyn Feldhaus of Howard, who won with an 8-3 decision. Heil however qualified for his first-ever medal after defeating Slayton Neugebauer of Parkston in his third match of the day, with an exciting 3-1 decision in sudden-victory overtime.

On Day 2, Heil earned his second win in a row with a 4:02 pin over Koben Huber of Sisseton. He however lost his next two matches of the day versus Logan Donelan of Elk Point/Jefferson (1:34 pin) and then to Stone Jensen of Mobridge-Pollock (4-2 decision).

“Kody and Garrett finish off a great season,” said Coach Ray Ringstmeyer. “I am happy for them, they worked hard for this. Kody showed a lot of heart finishing the season on a pretty bad knee, and Garrett was right in the fight with the eventual state champion.”

At 220 pounds and in his first-ever state tourney, Maciejewski (26-25 overall) earned Hot Springs' only other victory in the tournament when he defeated Ethan Nehlich of Tri-Valley with a 2:15 pin in his first match of the consolation round. He would drop his next match by a narrow 2-3 decision versus Wyatt Locke of Groton Area, to finish with a 1-2 record for the tournament.

“Caleb came on strong at the end of the season,” Ringstmeyer said. “As only a sophomore, I am excited for the next two years.”

Despite losing his first match versus Hunter Pranger of Mt. Vernon/Plankinton/Corsica-Stickney with a 1:32 pin, Edgemont's Grill came back in his second match to earn a 11-1 major decision over Mason Fey of Redfield. Grill however was eliminated from a medal in his next match following a 7-3 decision loss to Preston Jones of Britton-Hecla.

Hanes, competing in his first-ever state tourney, finished 0-2 with losses to Jaden Schilling of Mobridge-Pollock (6-3 decision) and Tate Haider of Wolsey-Wessington (4:35 pin).

Hot Springs junior Garrett Heil attempts to pick up Stone Jensen of Mobridge-Pollock during the fifth place match in the 182-pound weight class of the Class "B" State Championship held at the Denny Sanford Premier Center in Sioux Falls this past weekend.