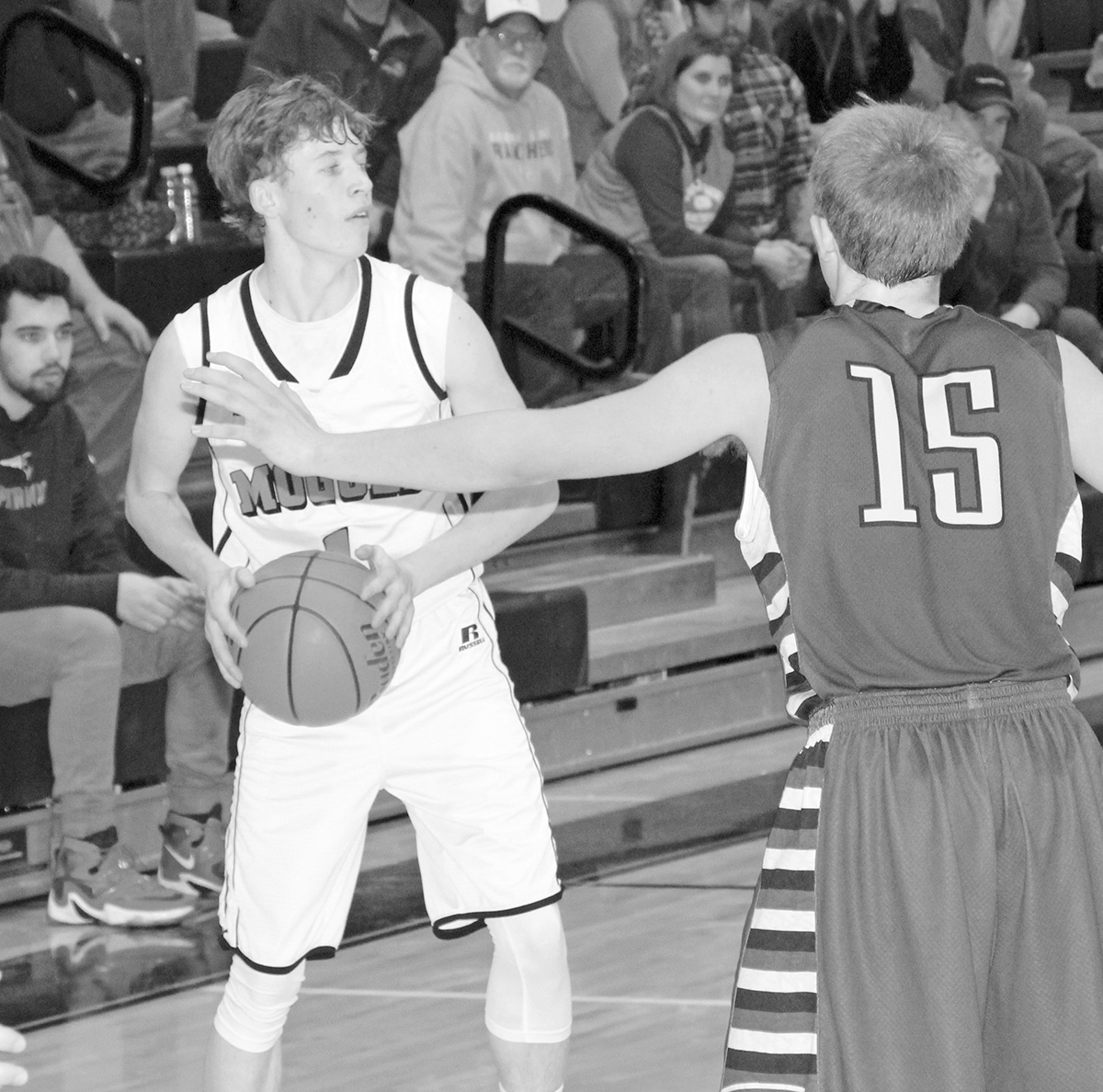 EDGEMONT – After a 10-day hiatus from any games played, the Edgemont Moguls boys' basketball team was back in action last week as they traveled to Hulett, Wyo., on Tuesday and then to Oelrichs on Saturday. Despite averaging 56 points in the two games, the Moguls fell in both, first losing to Hulett 62-84 and then to Oelrichs 43-75.

In Hulett, the two teams combined to put up 153 points on the scoreboard in a game which saw the host Hulett ahead at halftime 42-31, after Edgemont's Kaleb Darrow dropped in a ¾ court shot right before the buzzer sounded. Second half scoring was closer, and actually saw Edgemont outscore Hulett 24-21 in the fourth quarter.

“The Red Devils executed well in their half court offense, either pounding it inside or finding an open shooter on the perimeter,” said Edgemont head coach Joe Martin. “We needed to force turnovers and get defensive rebounds in order to push us over the top tonight.”

“The boys played smart and aggressive, limiting turnovers and converting at the line on many attempts, we took good shots, hit the offensive boards and converted put-backs. We’ve routinely had two players in double figures, having a third scorer tonight was a nice step forward for this group.”

“We finished with 12 points from our bench outscoring Hulett 12-4 for the game. Our seniors coming off the bench have played well this month, and it’s fun to see them enjoying their last couple of games as Moguls,” added Coach Martin.

Edgemont did win the JV game by a score of 25-15 with Corey Andrie and Clay Englebert each scoring six points apiece to lead the team.

Versus the Oelrichs Tigers, the Moguls got off to a slow start and were down 9-21 after the first period, but were able to keep it closer in the second period which made the halftime score 27-42 before falling by the 32-point margin in the end.

“The three Tiger seniors were impressive as a great atmosphere in Oelrichs made for good action on the court,” said Coach Martin. “I’m really proud of our kids for not letting up, but instead trying to solve problems and working together in order to find any success against a tough team.”

The Moguls were led by Kaleb Darrow with 21 points, including going 2-for-5 from three-point range. Caleb Simons scored 13 while Ryan Simons had 4, Cory Andrie 3 and Grant Darrow 2.

“I was happy with our defensive rebounding and free throw attempts, we made some tough shots near the rim, but a few were blocked away as their length created havoc for us all over the court,” said Coach Martin.

Ryan Simons had a team-high 10 rebounds, with eight of them on the defensive end of the court. Caleb Simons also had seven rebounds while Kaleb Darrow grabbed six and Dalton Reutter five.

“I saw a lot of hustle and positive communication on the floor,” Martin added. “We showed resiliency in getting it down to 15 by halftime, but Coach Knutson and Co. came out of the locker room and seized control early in the third. We hadn’t seen full court pressure in a few weeks and it’s a good reminder for us to focus on executing against it as we get closer to March.”

Oelrichs also won the JV game by a score of 43-21. Corey Andrie led Edgemont with seven points, and Clay Englebert with six.

Due to Sioux County, Neb., being unable to field a full team this year, the Edgemont boys did pick up a forfeit victory last week as well, which improved their overall season record to 6-13. The Moguls close out their regular season schedule this Friday at home versus Crazy Horse, who is 6-11 on the season.

Edgemont's Kaleb Darrow looks to pass while being defended by a Harding County Rancher during a home game played earlier this season at the Mogul Dome in Edgemont.