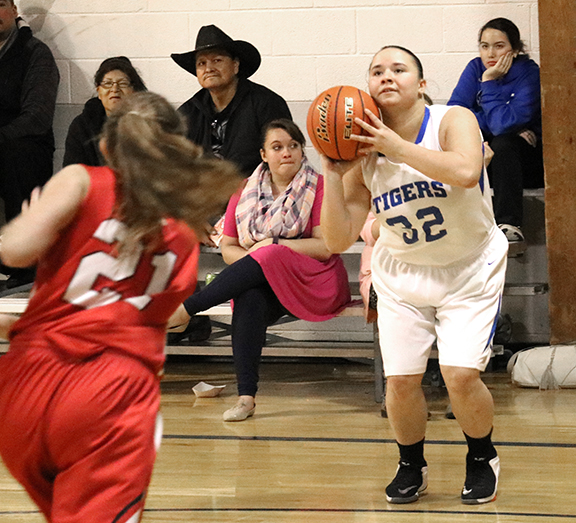 OELRICHS – The Oelrichs girls basketball team has now won five of their last six games after going a perfect 3-0 last week at home, first defeating Bison 65-32 on Tuesday, then Minatare, Neb., 62-30 on Thursday, followed by a 71-45 win over cross-county rival Edgemont on Friday.

“We are starting to see better ball movement and we are coming together as a team,” said Oelrichs girls head coach Dale Pine, Jr. “The last time we played Edgemont, we were lucky to pull out a win, but this time we knew we had to come out with some energy and everyone had to be aggressive, which we did.”

In that Edgemont game, Ariana Titus came off the bench to score a game high 17 points followed by Kyla Crow with 14, Natasha Swiftwater with 11, and Memoree Eagle Louse with 10.

Versus Minatare, Coach Pine had three Tigers with double digit scoring, with Swiftwater leading the way with 13, followed by Crow with 11, and Eagle Louse with 12.

On Tuesday night versus Bison, Titus again came off the bench to lead the team in scoring with a game-high 14 points, followed by Eagle Louse with 13 and Crow with 12.

“Kyla has really become a force in Region 7B,” said Coach Pine. “She is averaging double digit scoring in our past six games and that's a big reason we are 5-1 in that span.

Coach Pine added that the JV team also finished with a win on Parents Night against Edgemont and finished the season with a 7-6 record. “There is a lot of great talent coming up in our program and I'm excited for the rest of the season and the future of our program,” he added.

This week, the Oelrichs girls will play in the Dakota Plains Invitational in Santee, Neb., and will first face Freeman Academy/Marion on Thursday, with another game versus a yet to be determined opponent on Friday.

Oelrichs sophomore Baylie Her Many Horses squares up for a three-point basket attempt during a home game played last week versus Bison.