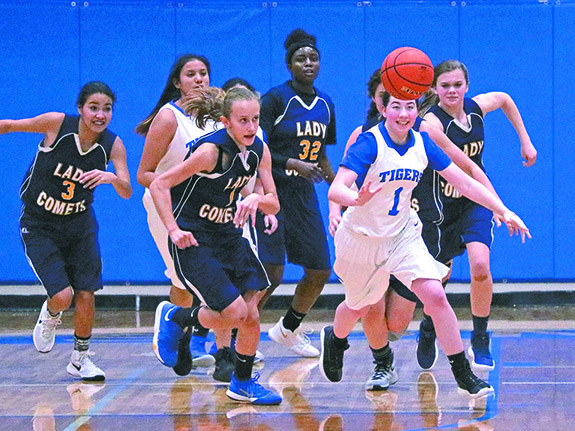 RAPID CITY – After winning their two opening round games in Hot Springs last Tuesday and Friday nights, the Oelrichs Tigers girls’ basketball team faced off against undefeated Faith in the championship finals of the West River Tournament (WRT) The game, played on the big stage of the Rushmore Plaza Civic Center in Rapid City, however went the way of the Longhorns, as Faith won by a score of 66-24.

The game for Oelrichs was their fourth in a span of just six days, which also included a close 40-42 loss in New Underwood on Monday, a 42-31 win over Rapid City Christian on Tuesday in the opening round of the WRT, and then a 46-39 second round win over in-county rival Edgemont on Friday.

“We are learning as we go,” said Oelrichs head coach Dale Pine, Jr. “We played four games in six days so conditioning as well as inexperience played a factor in both Monday and Saturday’s game. I don’t look at them as excuses though, it’s good for our girls to experience that because regionals will be bunched up into one week so it’s an eye opener.”

In the narrow loss to New Underwood on the road last Monday, Coach Pine said his girls had a five point lead with two minutes left, but were unable to hold on. Natasha Swiftwater led the team with 15 points in the game.

In the opening round tournament win over Rapid City Christian, Arian Titus led with 15 points and eight rebounds, while Swiftwater had 10 points and three boards. Jada Rouillard led the team with 10 rebounds.

In their second round win over Edgemont, the Tigers were led by eighth-grader Memoree Eagle Louse with a double-double including 14 points and 10 rebounds. Titus also had double-digit rebounds with 12 as well as six points. Kyla Crow and Swiftwater both scored eight points each. Crow also had eight rebounds.

In the final game versus Faith, where both Titus and Swiftwater led with eight points each, Coach Pine said his girls kept it close in the first and third periods, which are some of the positives the Tigers can focus on as they work on some of their mistakes which took place over the week.

“I’m confident this group will be ready to go by postseason,” Coach Pine added.

This week, the Tigers have another busy week with a rematch at Rapid City Christian on Tuesday, and then a pair of home games on Thursday and Saturday versus New Underwood and then Crazy Horse.

Oelrichs freshman Jada Rouillard chases down a loose ball versus Rapid City Christian during the first round of the West River Tournament in Hot Springs last Tuesday.