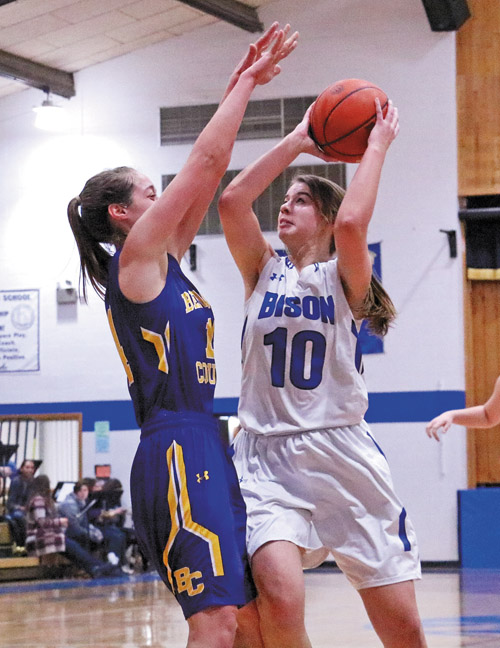 HOT SPRINGS – The Hot Springs Lady Bison basketball team earned its first win of the season last Thursday with a home victory over Bennett County by a final of 46-41.

“It was a great confidence builder for the girls,” said Hot Springs head coach Tanna White. “They played hard throughout the game and I was happy to see them work hard until the final buzzer. They improved their passing, utilized their offense and played tough defense.”

Coach White said senior Charity Britain was a great asset with multiple steals for layups. Kennedy Seaman led the team from her point guard position, while McKenzie Cope took control underneath. Underclassman Abbie Seymour also came in and gave a nice spark to the team that evening, White said.

Last Friday night, the team traveled to Spearfish where they lost to a tough Spartan team by final of 16-48.

“During this game we were unable to put anything together offensively,” Coach White said. “While we were able to rebound and play with them defensively, we just couldn’t get anything going on our end. Shooting low percentage from the field and three-point range hurt us that night.”

The Lady Bison, who are now 1-5 on the season, will compete in the West River Tournament this week, where they face Edgemont in the opening round on Tuesday night at Case Auditorium. Other teams in the tournament with first and second round games in Hot Springs include Oelrichs and Rapid City Christian. In the other half of the tournament in Newell, teams include Faith, Upton, Wyo., Newell and Moorcroft, Wyo. The third round and championship games will be played in Rapid City on Saturday.

Edgemont defeats Crawford on the road

EDGEMONT – With three games in three days, the Edgemont Lady Moguls had a busy first week after Christmas break and picked up their first win of the season as they defeated Crawford, Neb., on the road last Thursday night, by a score of 32-29, despite being down 18-21 to start the fourth quarter. They then however dropped their next two games last week, losing to Hill City 36-54 on Friday and then 33-48 to Sioux County, Neb., at home on Friday.

“It was a good first win for the Moguls,” said Edgemont Lady Mogul head coach Lane Ostenson. “It was a 2-3 point game until we made a small run with a couple minutes in left in the fourth to go up by 9. We held on to the lead at the end, bring home our first win.”

In the Hill City game last Friday, the Lady Rangers led throughout, including holding a 25-16 lead at halftime.

“We got down early at the start of the game 7-0 and kept in the game until the end of the third quarter,” Coach Ostenso said. “They went on a run and had a good start to the fourth quarter to blow the game open for the Rangers.”

On Saturday night at home, versus Sioux County, Neb., Coach Ostenson said turnovers and missed opportunities under the basket and on the free throw line was the difference in the  game, which saw Sioux County win by 15 points in the end.

With 15 turnovers committed by halftime, Coach Ostenson said, “We can’t afford to turn the ball over that many times and expect to win.”

This week, the Lady Moguls will compete in the West River Tournament which sets up a matchup with in-county rival Hot Springs in the first round on Tuesday night, Jan. 9. The winner plays the winner of the Oelrichs / Rapid City Chistian game on Thursday, with the championship set for Rapid City on Saturday.