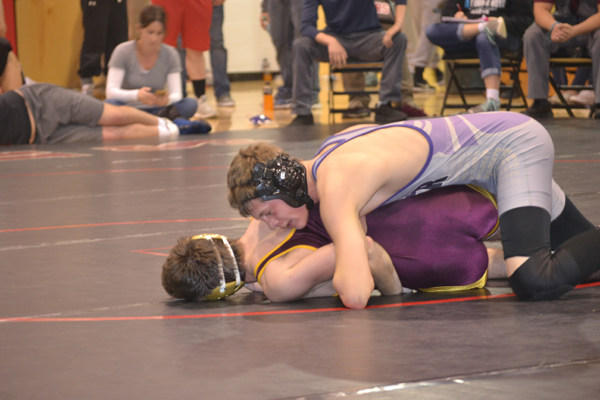 PRESHO – Competing without two of its Class “B” ranked wrestlers in Eli Mines (No. 9 at 145 pounds) and Levi Mines (No. 5 at 152 pounds), the combined Custer/Edgemont wrestling team placed seventh out of 26 teams at this past weekend’s Mid-Dakota Monster in Presho, hosted by Lyman County.

Edgemont junior Chance Grill was the lone individual champion for the Wildcat team, as he placed first overall in the 138-pound weight class, coming up from his third-seeded position. He had pins in round one and two, a 10-0 major decision win in the quarterfinals, and then won 2-0 over the second-seeded Kegan Pearman of  Mobridge-Pollock in the semi-finals.

In the championship finals, Grill won with a 9-4 decision over Dylin Johnson of Lead-Deadwood. Grill entered the tournament as the state’s ninth-ranked wrestler.

Also competing on the team from Edgemont was seventh-grader Cade Grill at 106 pounds and sophomore Brennan Hanes at 132 pounds.

Hanes placed fifth overall with a 3-2 record. After a first-round bye, he earned pins in the second and third rounds and lost a tough 1-5 decision in the semi-finals to Teigan Clark of Sunshine Bible Academy. He lost by a pin in the consolation round and came back with a 2:58 pin over Chayden Miller of Little Wound in his final match.

At 106 pounds, Cade Grill finished with a 2-2 record, after losing his first match by a 0-10 decision in the second round to the third-seeded Oakley Blakeman of Belle Fourche, who was the eventual runner up in the tournament. Grill however then had back-to-back pins in the third and fourth rounds, but ultimately lost his bid for a top-eight medal when he dropped a close 3-2 decision to teammate Jonathan Lewis in the fifth round.

Custer/Edgemont this week will compete on Thursday in Hill City at a quadrangular with Hot Springs, Red Cloud and Hill City, and then at the Philip Invitational on Friday and Saturday.

Chance Grill of Edgemont, top, placed first at 138 pounds during this past weekend’s big Mid-Dakota Monster, hosted in Presho by Lyman County.