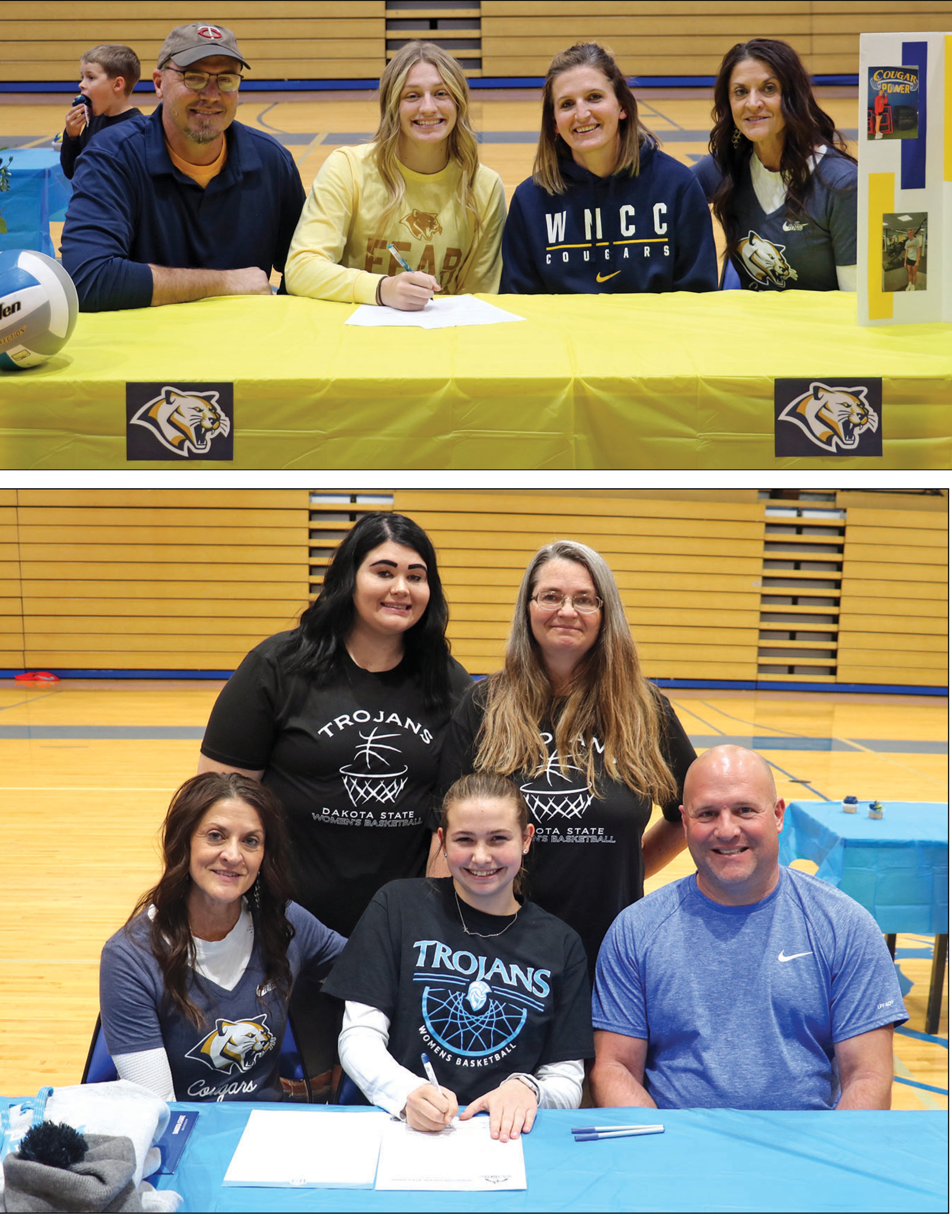 Beginning with the 2023-24 school year, senior Jaylen Nachtigall will be playing volleyball for Western Nebraska Community College (WNCC) in Scottsbluff, Neb., while fellow senior Alyssa Koffler will be competing in both basketball and track for Dakota State University in Madison, S.D. Both of the girls’ chosen universities have recently seen success on the national level after qualifying for their respective national tournaments.

Koffler, who plans to major in accounting at Dakota State, said she expects to play guard on the basketball team and also compete in pole vault, high jump and both hurdle events for the Trojans.

Dakota State University is an NAIA college program which competes in the North Star Athletic Association (NSAA). They just began their 2022-23 campaign and are currently 6-3 on the season.

Last season, the team finished with a 27-8 record overall and won the NSAA regular season and post-season championships which advanced them to the NAIA Women’s Basketball National Tournament, where they finished with a 1-1 record and qualified for the Round of 32.

When asked why she chose to attend Dakota State University, Alyssa said, “I loved the town, the accounting program, and then the coaches sealed the deal.”

“I loved how they were committed to family but knew the ups and downs with it,” she said. “Coach (David) Moe and (Jacob) Leir talked a lot about the love of basketball and what basketball can do for life lessons. Also the mindset of the game and where I fit in as an athlete with their team. Track coach said a lot about how the team pushes you through practice. Also that you need to show up everyday to become a better teammate, person, and athlete.”

Koffler said she is looking forward to working with her new coaches and improving on the skills that her high school coaches have already helped her develop. “I especially can’t wait to do pole vault again,” she said regarding an event which is not available in Hot Springs, but is something she did when she attended school briefly in Custer earlier in her high school career.

Nachtigall, who plans to pursue a degree in psychology, is a four-year volleyball letter winner and has led the Lady Bison in kills the past two seasons – with 357 kills this season as an outside hitter and 226 last year as a middle hitter. She was also second on the team in digs the past two seasons with a combined 567 and also 60 block points.

She will be going to play for a two-year program which last week finished sixth in the nation at the National Junior College Athletic Association (NJCAA) Division 1 Tournament, after finishing with a 34-5 season record overall. They are coached by Binny Canales, who has led WNCC for the past nine seasons while surpassing 250 wins, five region titles and five national tournament appearances.

“WNCC is overall a great school,” Jaylen said. “I had been in contact with the volleyball coach there and he invited me to do a campus visit. He greeted me as soon as I got there and I felt wanted and welcomed. He played a huge factor in my decision to go there. He explained to me that his goal is to better my skills and hopefully be able to move on to the next level after my time there.”

Nachtigall, who hopes to play for a NCAA Division 1 or Division 2 school her junior and senior college years, said she participated in an official visit with the WNCC Cougars in October during their volleyball season and got a chance to play with the team and spend a night in their dorms.

“This was a great experience and I had so much fun playing with the girls and being a part of the team,” she said. “WNCC has a high percentage of college athletes in their student enrollment which meant that there would be a lot of students with the same goals and aspirations I have. Overall, the atmosphere of the team and school were just what I was looking for and I am excited to be part of that.”

Nachtigall added that she is very much looking forward to experiencing volleyball at the next level.

“Volleyball has never come easy for me and now I will be able to become even better and learn new skills,” she said. “I am most excited about having the opportunity to be surrounded by teammates who have the same goals in mind. Playing college volleyball will help me to level up and get to where I’ve always wanted to be.”

Both Nachtigall and Koffler are multi-sport athletes. Koffler also played volleyball this past season for the Lady Bison and set a new school record with 801 kill assists, which shattered the previous high mark of 576 set by Heidi Beehler in 2006. Nachtigall meanwhile also competes in gymnastics and track and has been an individual state place winner multiple times in both sports.