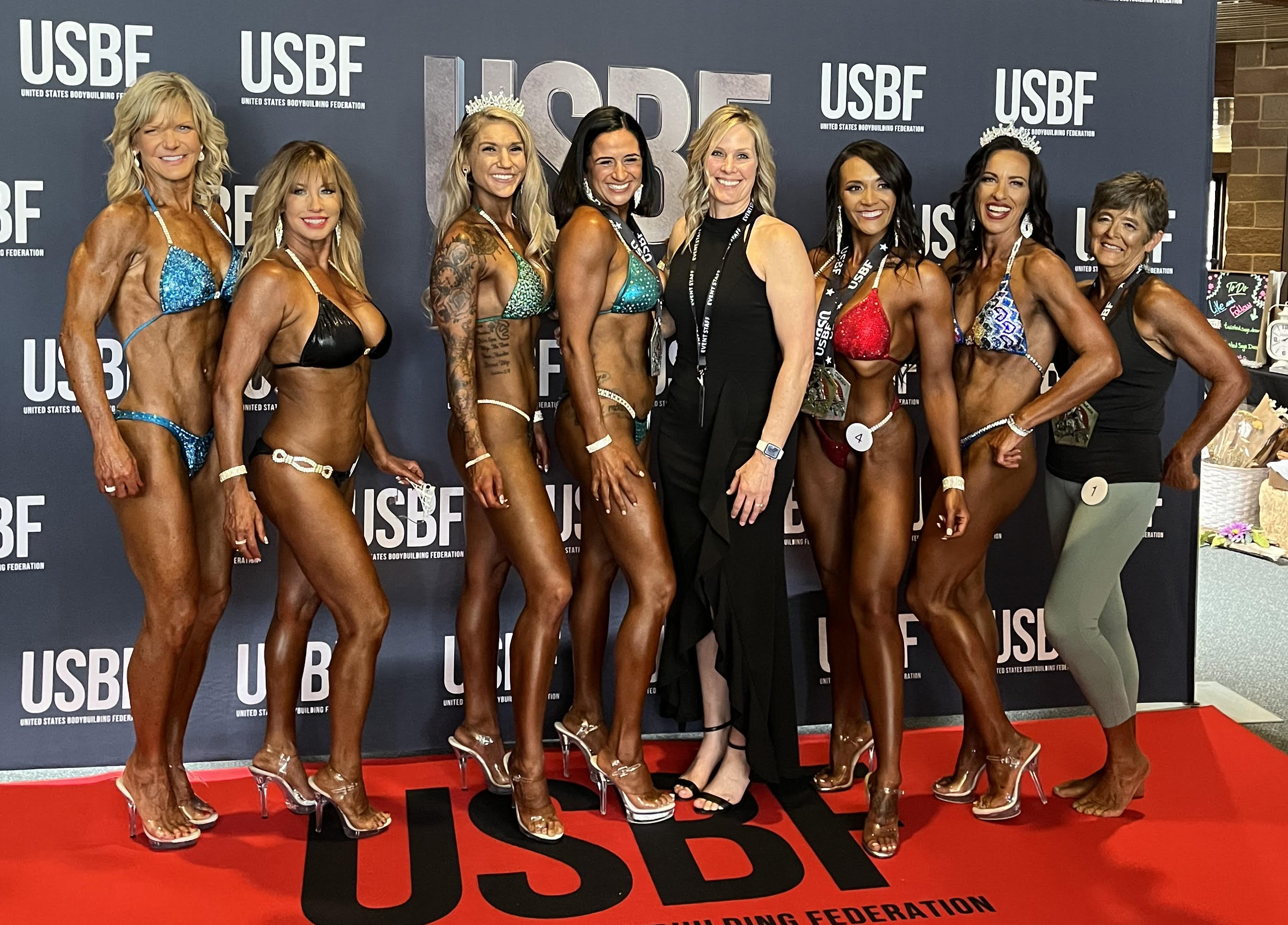 Moir reported that, while she would have liked to have seen more local residents attend the event and see what it was all about, she was still very pleased with 80 or so people who did attend and the seven competitors who took part in the first-ever event held at the Mueller Center in Hot Springs on May 28. Moir added that three of the seven competitors competed in a USBF event for the very first time ever.

“It was amazing,” Moir said, as she complemented her team of volunteers who helped make the event a reality and who will now also be working together on a similar competition planned for Hot Springs on Sept. 17 which will be for both male and female competitors and called the Black Hills Gateway Classic.

One of the competitors, Christina (Schultes) Schmit of Rapid City, who is originally from Edgemont and graduated as a Mogul in 1994, was very impressed with the event – both from the standpoint of the level of competition, but even more so from the perspective of how professionally it was organized. From the lavish swag bags that each contestant was gifted, to the team of people who put on the event, Schmit said she was very impressed.

The mother of three (ages 13, 9, 7), Schmit said she knew she wanted to get into weightlifting and fitness ever since she was a little girl growing up in Edgemont and after watching the movie Terminator 2 at the age of 9-years-old, when she saw the actress Linda Hamiliton doing pull-ups in the movie while playing the character Sarah Connor .

The inspiration eventually saw Schmit become a personal trainer, which is what she continues to do now in Rapid City. She said she first heard about the Goddess Classic when one of her own clients asked her to help her train for it. Familiar with the sport after having competed herself in a couple of USBF events in Denver in 2018 and 2019, Schmit agreed to begin training her client for the Goddess Classic. While doing so, and despite her client eventually deciding not to compete in Hot Springs, Schmit’s love of the competition was rekindled so she then hired her own trainer to help her get ready for Hot Springs’ Goddess competition.

Schmit said her training began about six months ago and consisted of a strict regime of precisely timed and altered cycles of weightlifting, diet and cardio. Her hard work certainly paid off as she was awarded first place in all of the “Figure” categories, including Figure Masters of the age 40-49 division.

Another competitor, Celina Lohre of Black Hawk, who won first place in the Bikini Novice division, said she had competed in two previous National Physique Committee (NPC) events prior to the USBF competition in Hot Springs last week. Her first show was in Fargo, N.D., in October 2021 and the second show was in Sioux Falls the previous weekend on May 21, 2022.

“I am very new to the bodybuilding world,” Lohre stated. “After seeing this event posted on social media, I was drawn to this event as it was local. It was an all-female event where women empowered other women, and it was a natural show, and I was already planning to be in prep during that time. I thought it would be a fun event and a chance to make new friends in the local area.”

Just as Schmit stated, Lohre too was very impressed with the Hot Springs event, based on how well it was organized, which included great communication from the promoter and feedback from the judges.

“The music was fantastic, the energy was contagious, and everyone had a great time,” she said.

Lohre said she started “her journey to the stage” in March 2021 and has been training every since. “I’ve lost 50 pounds within a year. I worked with my trainer who built my workouts and nutrition plan, and I stayed consistent and dedicated, trusting the process. I woke up five days a week at 4 a.m. to train, I did seven days of cardio in the evenings, I meal prepped and tracked my meals, as well as leaning on my support system at home during my prep before stepping on stage.”

Based on her experience over the past 14 months, Lohre said she highly recommends the sport of competitive bodybuilding to anyone who is interested.

“It is hard work and takes a lot of discipline and dedication, but the reward of reaching your goals as well as gaining confidence in yourself is worth all the effort! Trust the process and know your goals!”

Following are the full results from the 2022 South Dakota Goddess Classic.