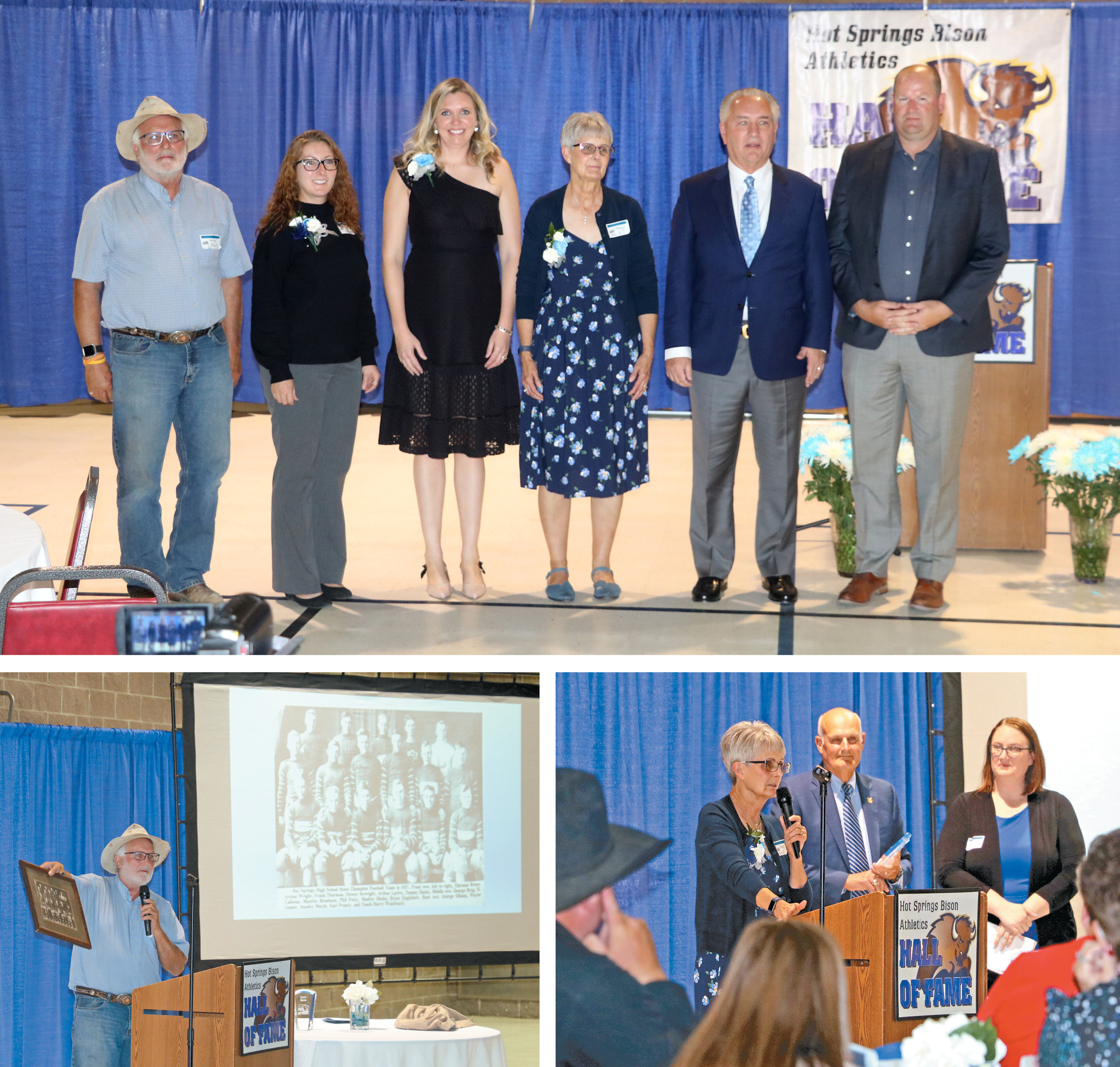 TOP: The most recent inductees in the Hot Springs Bison Athletics Hall of Fame includes, from left: the 1917 Hot Springs Bison Football Team (accepted by Greg Burg, whose grandfather George Burg, Sr., was on the team), Lisa Collogan-Starr, Kathleen Schjodt, Cheryl Burg-Huddleston, Leroy Hofer (accepted by his son Preston Hofer) and Kevin Couch. Not pictured is Jim Kocer, who was represented by Hall of Fame board member Carlos Cornay.

BOTTOM: The Hot Springs Bison Athletics Hall of Fame Induction Banquet was a family affair for the Burgs, as Cheryl (Burg) Huddleston was inducted as part of the Class of 2020. Also in the photo on the right is her brother Maj. Gen. Roger Burg, center, served as the event’s emcee, while her daughter Rachel Huddleston, right, introduced her. In the left photo is Cheryl’s brother Greg who accepted the induction honors for the 1917 HSHS state championship football team, for which his grandfather George Burg, Sr., played. He is shown here wearing the hat of his late grandfather.

HOT SPRINGS – For her acceptance into the Hot Springs Bison Athletics Hall of Fame this past weekend, Lisa (Collogan) Starr played a video which described the hierarchy of a successful sports program, which at the top featured the word “Pride,” above “Community, Coaches and Athletes.”

Her demonstration proved to be a common theme expressed by many of the presenters and inductees at the banquet held Saturday evening, Sept. 25, at the Mueller Civic Center where six individuals and one team became the latest honorees into the Hall of Fame, which was created in 2016.

At the foundation of this hierarchy described by Collogan-Starr are the athletes themselves, which could be said consisted of all the 2020 and 2021 athlete inductees, including Collogan-Starr (1999 graduate), along with Kevin Couch (1996), James Kocer (1964), Kathleen Schjodt (2006) and the members of the 1917 Hot Springs Bison football team.

Collogan-Star holds three individual school girls track records (100m, 200m, 400m) and is a part of two relay records (400m, 800m). Couch is a state champion in three events including cross country and track (1,600-meters, 3,200-meters). Kocer was the leader of the 1964 undefeated Hot Springs Bison football team and the 1963 conference scoring champion. Schjodt scored a total of 1,211 points during her varsity Lady Bison basketball career and went on to play college basketball for the Air Force Academy. The 1917 football team was led by Hall of Fame coach Harry R. Woodward and earned a state championship with a 5-1 record.

The next highest element of the sports hierarchy triangle described by Collogan-Starr are the coaches, which not only included new inductee Cheryl Burg-Huddleston, but also two other previously inducted Hall of Fame coaches in Jim Tays and Dave Scott, who were both mentioned numerous times during the banquet by multiple inductees who credited them for much of their success.

Burg-Huddleston was an assistant under both Tays and Scott during his 35 years as a coach for the Hot Springs Bison, following an athletics career which included basketball and track in Hot Springs as well as college basketball for a junior college in Missouri and Chadron State College in Nebraska.

Tays, age 89, was present at this past weekend’s banquet. Dave Scott passed away at the age of 65 in 2005. The two coaches’ tenures at Hot Springs High School overlapped over three decades in the 1970s, 80s and 90s.

In her video, Collogan-Starr showed a news clip of Coach Scott, who when interviewed, credited a lot of his track team’s success to the third level of Collogan-Starr’s hierarchy – the community.

Coach Scott spoke of how loud the Hot Springs crowds cheered in support of the Bison student-athletes at the track meets in the 1990s, which is something Kevin Couch also noted in his acceptance speech when he talked about how he could hear the fans chanting his name as he pushed for a state title in the two-mile run.

This level of the hierarchy was also represented by new inductee Leroy Hofer. The father of two Hall of Fame athletes – including individual 2016 inductee Quinten Hofer and team inductee Preston Hofer – Leroy, who passed away at the age of 91 earlier this year, was at one time President of National Bank of South Dakota in Hot Springs and led numerous fund drives and started a Quarterback Club in support of Hot Springs Bison athletics in the 1970s.

Preston Hofer, who accepted the Hall of Fame honor on behalf of his father, said that his dad would have said that he was just one of the many people and organizations who have done what he did over the years to show their support of Bison high school athletics.

Another common theme noted by all of the inductees during their acceptance speeches were the importance of family.

Burg-Huddleston had a lot of family present at the banquet as her oldest brother Roger Burg served as the emcee of the event and another brother, Greg, accepted the 1917 football team’s induction on behalf of the grandfather George Burg, Sr., who was a member of that state championship team.

Couch credited his parents, Ken and Vivian Couch of Buffalo Gap, who instilled in him strong values and work ethic. Collogan-Starr was introduced by her father Gerald Collogan, who was an inaugural 2016 inductee. The father-daughter duo, along new inductee Jim Kocer and his father James “Duke” Kocer, join Jim Tays and his son David Tays, as two-generation Hall of Fame inductees.

Schjodt, who was introduced by her high school coach Kim Henningsen, ended the night’s induction speeches with a special acknowledgement for father Steve Schjodt, who passed away just five months ago, following a short battle with an aggressive, untreatable brain tumor.

“I first heard that Hot Springs was starting a Hall of Fame from my dad,” Kathleen said. “He called me up and was so excited and started compiling my stats immediately and I think started emailing Coach Henningsen right away.”

Kathleen, who received the call of her induction into the Hall of Fame one month after his passing, went on to say how her dad encouraged and motivated her throughout her life.

“I spent many hours outside in our driveway shooting baskets and across the street in Butler Park playing catch with him. He insisted throwing and catching a ball was a critical skill to know for any sport, so we practiced a lot,” Kathleen said, as she described how their neighbors probably thought they were crazy shooting baskets outdoors in the middle of winter, with the snowflakes falling down.

“Throughout all of the hours we spent practicing, I learned a very important lesson that has carried me far in my life. It didn’t matter if I was the most athletic, smartest, or the most skilled in whatever I was working toward, if I worked hard and put in the time practicing, had a bit of grit, I was able to achieve my goals. So thank you Dad. I would not be here without you.”