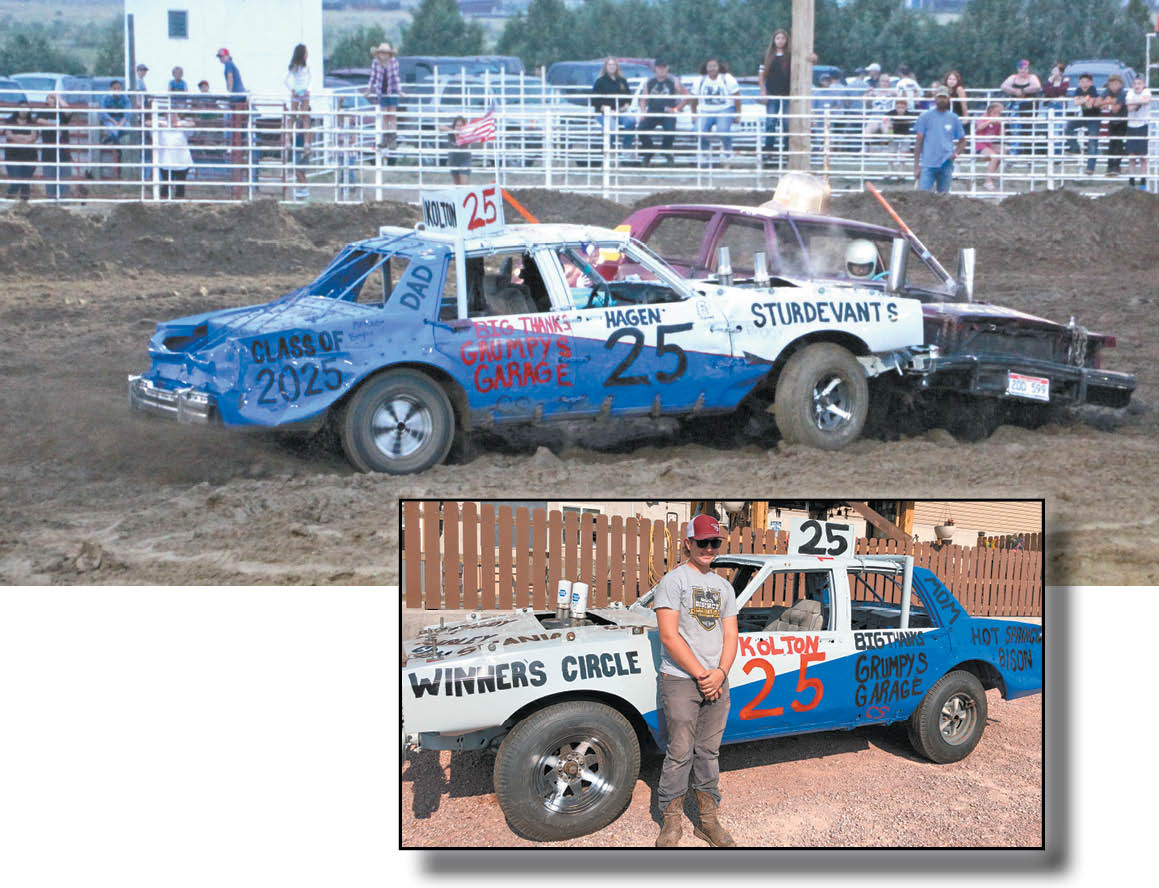 This years’ derby showcased more than a dozen cars from South Dakota and neighboring states, all with their eye on the winners circle.

The derby held a weld-up class, chain up class, pick-up class, powder puff and a Herbie Derby. It was run in heats where the winner of each heat went on to compete in the main. If a driver was out in their heat but could get their car running again they were allowed to enter the consolation competition for another chance at a win; a consolation win.

“Many of the competitors start building a year ahead,” said Everett Englebert, longtime derby participant and past coordinator, “so we needed to make sure to get the derby rules out early to all the drivers.”

“Derby rules are probably the most difficult part of running derby, and running a pre-ran car,” said Wayne Martinson, long time derby competitor and proud father of this year’s derby winner Tyrell Martinson #55 of Gillette, Wyo., “we have to make sure our cars fit the rules for the next derby, each one has different judges and a different set of rules.”

Regardless of the variety of rules the drivers all have one thing in common; the love of the game.

“I used to weld up my neighbors car for derby’s,” explained Lyndon Branson, aka Mud Stud #92 from Hyannis, Neb., “then the bug hit me real bad. I’ve been competing for 33 years now and had 5 different state championships.”

“This is a family affair,” said Joni Martinson, “they love to do it and the family has a true love of the sport.”

And for some, demolition derby runs through their veins.

“I am a fourth generation derby driver,” said Tyler Morrow, 19, of Hot Springs. “I’ve been driving derby since I was 13. My favorite part is the adrenaline rush.” Tyler thoroughly enjoys all aspects of building his own derby car, with pride in building his motors in his shop with his dad Billy, who is a longtime local fan favorite and a past winner of the Fair Derby for several of the past few years. Tyler won his heat in the full weld, while his dad Billy was the overall runner-up this year.

Power poles were placed around the sand arena in previous years but Englebert said they changed that practice and instead create a sand berm around the arena and in the middle “water it down to make it muddy.” This years’ rules were announced in the pit regarding the berm, if you have three tires over the berm and can get back in you can compete, if you have four tires over the berm, you are out.

“I’ve been working on my car since April,” claimed Kolton. Yet his father, Lester Hagen said that his son had been dreaming of competing for years.

Kolton competed in the bolt and chain class and won, however he opted not to compete in the main in an effort to save his car for the next competition in Harrison, Neb.

Kolton spent most of his spare time after school and this summer modifying his Oldsmobile Delta 88 powered with a 305 Chevy motor.

“I had to pull out the seats, make a cage, weld and chain the doors, add a radiator and basically weld everything we are allowed to weld,” said Kolton. “I had to weld valve stem protectors, put an A/C condenser in what was the back seat to help cool the transmission and remove all the windows.”

And with the windows removed and the doors chained and welded, the only way into the vehicle is the good old Dukes of Hazard move; jump through the window feet first. But make sure the removable steering wheel isn’t sitting on the seat first.

Welding and bolting not only increases the strength of the metal and weak junctions of the vehicle it also is a safety issue as it lowers the amount of metal that could break off and possibly injure another driver.

Safety is a major player in this demolition game as all drivers must wear protective gear including helmets, neck braces, back braces and fire retardant jackets.

In order to help offset the cost of running his car, Kolton was fortunate enough to get sponsors such as Sturdevants, DeBoers Drywall and Paint, Winners Circle and many family members.

“It was a lot of work to put it all together,” he said, “but painting it was the most fun.”

Kolton is an incoming freshman and enjoys science and aspires to be an electrician.