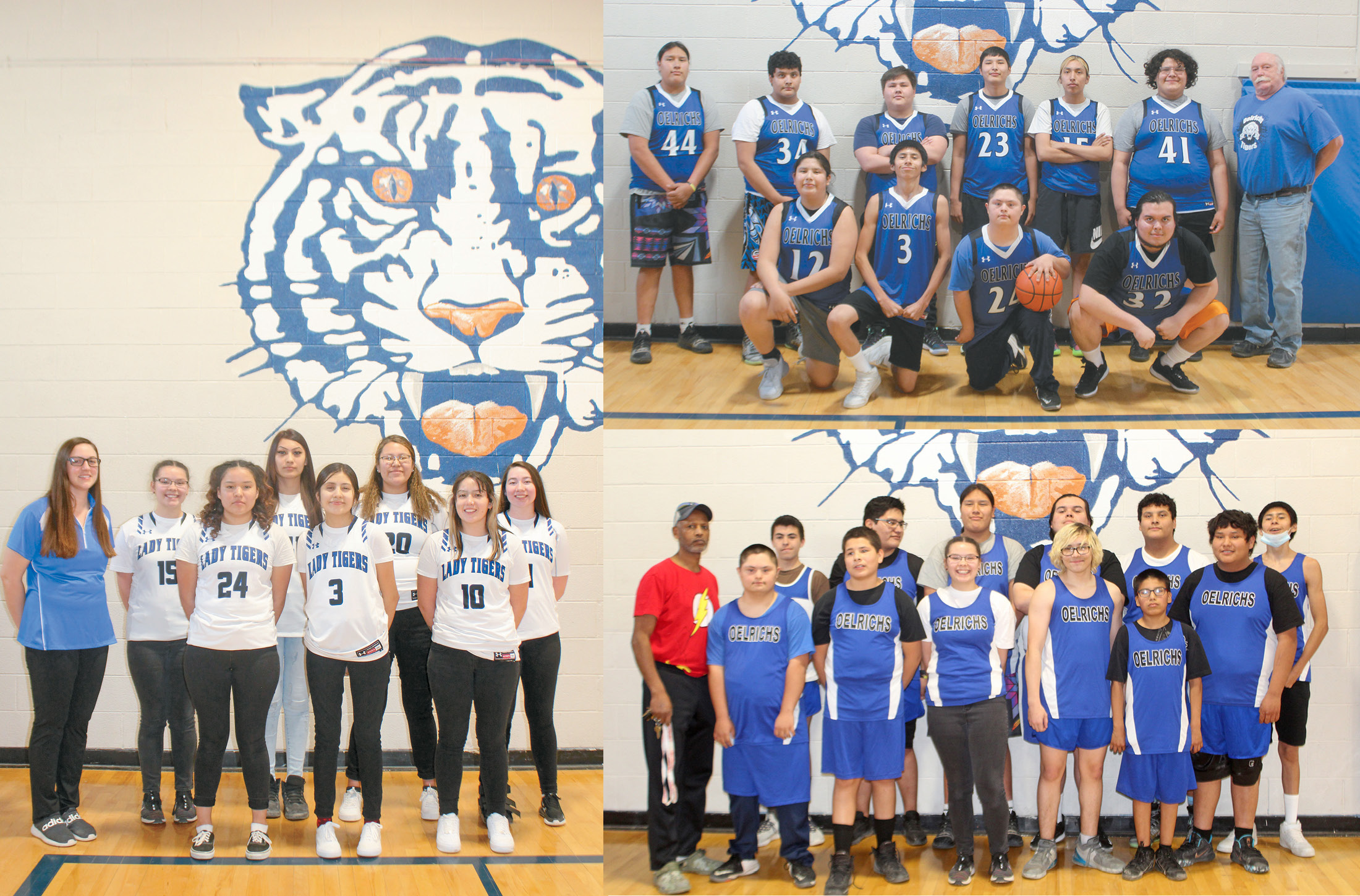 OELRICHS – After a full year without sports at Oelrichs High School, the Tiger basketball teams laced up their shoes this past Saturday afternoon and hit the hardcourt with a game at Wakpala, located north of Mobridge. The boys and girls double-header kicked off a six-game schedule which will see Oelrichs rotating home/away contests with Wakpala, Cheyenne Eagle Butte and McLaughlin.

According to Oelrichs Activities Director Katie Bauder, the schedule is sanctioned through the South Dakota High School Activities Association. There will not be an end-of-the-season championship, but Bauder said there is a recognition event planned.

“This season is for the youth that were impacted and missed out on their regular basketball season,” said Bauder. “We have a few seniors graduating soon and I think having a short season to send them off is a great way to end their high school career.”

T’Mara Twiss of Oelrichs, who has two daughters (Jaida and T’lea Rouillard) on the Tiger basketball team, was very vocal this past winter in her disappointment that Oelrichs would not be playing winter basketball and urged the school board to develop an alternative, which included potentially co-op’ing with nearby Hot Springs. She however is now very excited for the promise of a spring season and once again see her daughters on the same floor together and competing alongside their classmates.

“I’m most excited because it is the last year for my girls to play together,” Twiss said. “It was very disappointing thinking they wouldn’t get to play their last year together and for Jada to not to get to play her senior year at Oelrichs when she’s been playing varsity here for six years and has been a starter since she was a freshman.”

“The starting five this year have played together for the last four years. So that’s pretty special to me and the girls,” added Twiss. “Being a short season and the long trips stink but it’s all worth it for them to get to play. A few games is better then none at all.”

Bauder said the challenge the school faced during the regular winter basketball season was that most of Oelrichs’ students were on tribal stay-at-home orders and were not able to come to school or have activities.

“The orders have been lifted and the South Dakota Athletic Director’s that were affected by this came together and planned for a spring season for our student athletes,” Bauder said.

In addition to the abbreviated and special spring basketball season, Oelrichs will also have a spring track and field season for both boys and girls, which will see them competing alongside the state’s other teams at the various SDHSAA-sanctioned meets around the region.

“Students at Oelrichs have the option to participate in both track and basketball this spring,” Bauder said. “We have many talented athletes who participate in multiple sports during the school year. We have about six student-athletes that will be participating in both sports. The track and basketball coaches coordinated together to make this possible by holding basketball games on Saturdays only and the track schedule will not have Saturday meets, so students do not have to make the decision to go to one or the other.  Our student-athletes are excited to participate this spring and look forward to seeing their fans in the stands.”

Twiss said she is very thankful to Katie Bauder for working so hard to get Oelrichs a basketball season this year.

“I love watching my girls play together,” Twiss said. “They have been playing one-on-one since they could dribble a ball and they have amazing basketball chemistry when playing together. So we’re all pretty darn excited and thankful.”