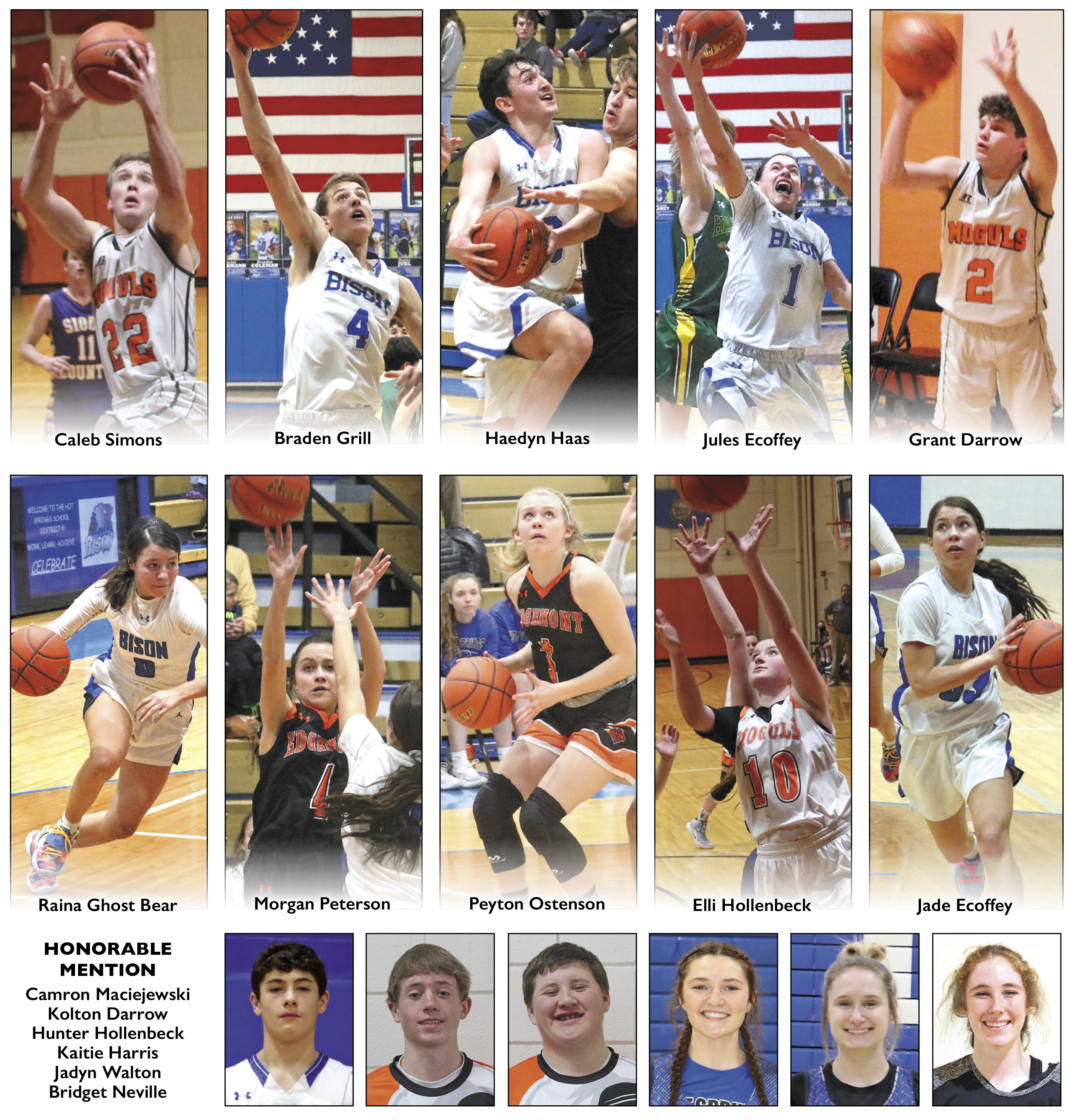 HOT SPRINGS – For the fourth season in a row, the Fall River County Herald-Star is proud to announce our All-County basketball team.

The list began following the 2017-18 basketball season which coincided with the first-ever year of the combined Fall River County newspaper – then known as the Fall River County Herald – which was committed to covering the high school sports in Hot Springs, Edgemont and Oelichs.

Over the past four years, only one player has made the team each and every season, and that is Edgemont senior Caleb Simons.

This past season, due to COVID-19 concerns, the field was narrowed to only Hot Springs and Edgemont since Oelrichs did not have a basketball season.

Inclusion on the time is primarily statistics-driven, with the Honorable Mention category serving as an opportunity for the coaches to recognize other players with solid seasons or promising futures.

Following are the 2020-21 All-Fall River County Basketball Players, their stats for the season, along with comments from each of their coaches.

“Simons is a two time captain. He showed great durability and was available to his teammates and coaches every day, every year. Named to his 4th All-WRT team, he was one of three Class B boys to make over 100 free throws this season, he did it three years in a row, and one of six to average a double-double. Even with three 30-point performances, his best game was in the postseason at White River.”

“Braden Grill had a breakout season for us this year. Even though he isn’t the most vocal player on the floor, he became a leader on this basketball team based on his dedication and work ethic. Braden is the type of guy that shows up everyday with a great attitude and gives 100%. He was an All BHC selection this year and I expect big things from Braden going into his senior season.”

“Haedyn joined the team after Christmas and had an immediate impact. He was our most consistent shooter from the 3 point line and also from the free throw line. His ability to shoot it from 3pt range allowed us to stretch out defenses and opened up driving lanes and opportunities for post entry passes. I believe Haedyn is going to be an elite shooter in the BHC by the time he graduates from high school.”

“Jules also joined the team after Christmas and quickly became our best defender. Jules is a good scorer and rebounder but what sets him apart is his effort and intensity on the defensive end of the floor. In every game Jules played for us this year he was tasked with defending the opponents best player. He is a very well rounded basketball player and as coachable as any player I have ever worked with.”

“Darrow is a two time captain. He led EHS in assists, charges taken, three point shooting , and FT percentage. Always present, we can count on him, and the way he conducts himself made us lucky to have him. He averaged 13.7 points a game at the WRT, capped off by five three-pointers in a win over Newell, a year after hitting four 3’s and scoring 12 vs Newell in the WRT.”

“Camron had a great freshman season. He impacts the game in so many ways, which is very unique for a player his age. He has a high basketball IQ and is a team 1st guy. Camron is hardworking, unselfish and focused on the success of the team over individual accolades. The sky is the limit for Camron Maciejewski and I am excited to be a part of his growth as a player over the next few years.”

“Darrow will enter next season as our returning scoring, assisting, and steals leader.  He made a season-high four 3-pointers on opening night vs New Underwood, before closing out 2020 with a season-high 15 points at Harding County. His five assists helped us to a home victory over Crawford. He plays New Underwood tough and he’ll be ready to get us off to a 1-0 start next season.”

“Hollenbeck shot 50% or better in 11 games. He didn’t take more than five shots in any of those games. When I explain efficiencies, the why’s, the where’s, he gets it. A full-time starter with great work ethic, he came out of the WRT a much smarter, productive player for us. He made a big shot in overtime with a toe on the line in our second matchup with Newell to help us to a comeback victory. We told him to scoot back, he said he would have been out of bounds.”

“Raina is a high energy player that has played a lot of basketball, and it shows on the court. She is a difference maker on both the offensive and defensive ends of the court.”

“Morgan Peterson was a game changer for us when she was on the floor. She is a spark that has a huge impact on the outcome of the game. She missed five games this year to various reasons that where totally out of her control and her absence was truly missed. She is a quiet leader on the floor. Morgan always seemed to draw one of the other team’s best defender but managed to shoot the ball from all areas very well! (3 pt. % - 32%, 2 pt. % - 35% and Free Throw % - 65%.) There is a lot of pressure being the point guard and she took everything that the other team could throw at us in stride.”

“Peyton had an incredible year for being only a sophomore. She was one of our iron horses that played in all of our games. Peyton is such a versatile player, she does well under the basket, out on the perimeter or bringing the ball down the floor. She did it all this year for the Lady Moguls. She has a never quit - winning attitude that is very infectious. She is always one of the first ones in the gym and the last one to leave.”

“Elli truly understood our defensive strategies and was usually in the right place at the right time. Her height was an asset for us when she was on the floor. Elli was another one that was sidelined for one reason or another throughout this year. When she shot the ball, Elli shot the ball well - 41% from the field this year. It was fun to see a senior have one of her best games of the year during the last game of the year. Not too many times can you say that! As a coach I felt like Elli gave me everything she had when she stepped out onto the court. Elli is going to leave some big shoes to fill for some of the underclassmen coming up.”

“Quick is the best word to describe Jade. She is able to push the ball in the open court and also able to break the press when she gets a seam in the defense. Offensively she looks to get to the hoop or penetrate and kick to the open teammate.”

“Kaitie was our leading free throw shooter and one of two seniors leading our program.”

“Jadyn was one of our primary ball handlers and a catalyst on the top of our defense. She was also our come back player of the year after missing the last two seasons.”

“Bridget is going to be one of the upcoming girls to watch for the Lady Moguls. She had some very strong defensive games early in the year filling in for an injured Elli Hollenbeck. Bridget had some good looks at the basket this season and shot 40% from the field. Bridget has some speed and definitely endurance, she could be one that does some great things for the Lady Moguls. If Bridget puts some time in during the summer, I could see her having a successful career in orange and black.”