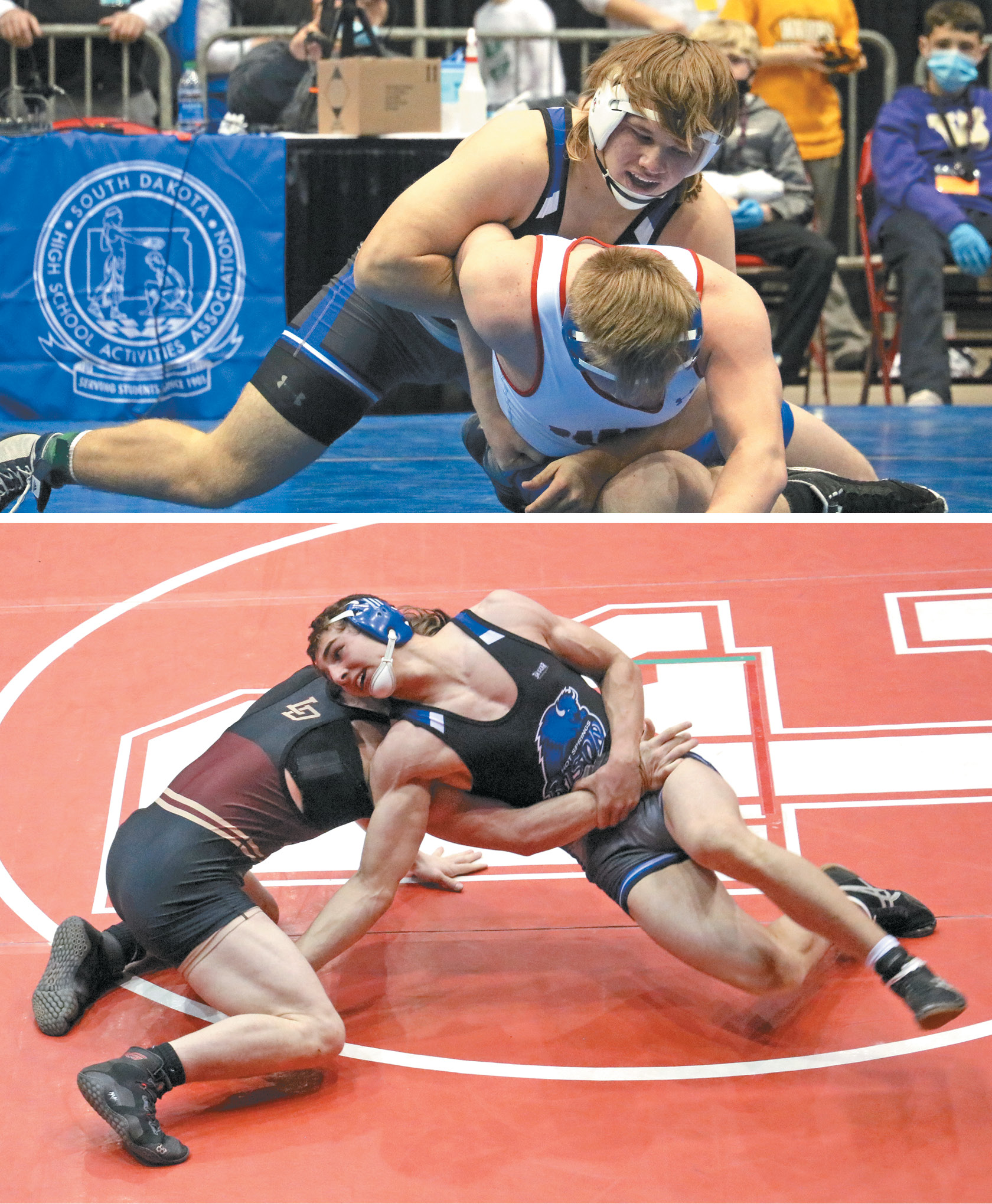 Senior Marcus Harkless (220 lbs) and freshman Caleb Rickenbach (170 lbs) both earned their way to the consolation championship of their respective weight classes in Class “B,” where Rickenbach won his match to place third overall and Harkless lost a close decision to place fourth.

For Harkless, who finished with a 32-5 record overall this season, the medal capped off six years of being on the Hot Springs varsity wrestling team, which also included a fifth place medal at last year’s state tournament.

For Rickenbach, who finished with a 37-6 record overall, the medal is likely the first of what could be three more state medals before his days are done wearing a blue Bison singlet.

“Toward the end of the season, Caleb and Marcus kind of gravitated toward each other and worked very hard for the end of season push,” said Hot Springs head coach Ray Ringstmeyer.

In his final state tournament, Harkless earned a 3-2 record which included pins in his first two matches over senior Teigan Hadrick of Faulkton Area (1:19) and then over freshman Levi Wieman of Parker (5:54). He suffered his first loss of the tournament in the semifinals versus eventual state runner-up senior Preston Norrid of Winner Area, who won by a 5-0 decision.

Harkless bounced back in consolation semifinals when he defeated Clayton Smith of Marion/Freeman by a 8-1 decision. In the consolation championship, junior Cole Pranger of Mt. Vernon/Plankinton/Corsica-Stickney won by a close 3-1 decision.

“Marcus wrestled his best matches of the year at state, despite being a bit undersized in a couple of those matches,” Coach Ringstmeyer said. “He finished off a very successful career with two state medals and a 131-62 career win-loss record. Eighty-seven of Marcus’s wins have come by fall. He was an exciting wrestler to watch and I am proud of how he led our team this year.”

Rickenbach earned an impressive 5-1 record at state, with his only loss coming to sophomore Gavin Jacobs of Elk Point-Jefferson in quarterfinals on Friday, which he lost by a narrow 8-7 decision. Rickenbach would however get the last word in their duel as he would redeem that loss in the third place match on Saturday with a one-point victory of his own over Jacobs, 6-5. In that match, Rickenbach was down 4-5 midway through the third period but earned a two-point reversal and then held on for the victory.

“Caleb was in a weight class where we thought he should have been seeded higher to give him a better chance to get to the championship match,”  said Coach Ringstmeyer. “I truly believed he was the second best wrestler in that weight class, behind now three-time state champion Sam Kruger. He battled though and proved where be belonged.”

Rickenbach’s other four state tourney wins included a trio of pins over sophomore Kolby Peters of Flandreau (:54), senior Cullen McNeil of Redfield Area (:40), and eight-grader Holden Havlik of Kimball/White Lake/Platte-Geddes (2:53), as well as a 11-8 decision over senior Cody Rakow of Lead-Deadwood in the consolation semifinals.

“Other than a few times where he ‘pumped the brakes’ a bit when clearly in control of the match or a certain situation, he put in his best tourney of the year, which is what we work for,” Ringstmeyer said.

Also qualifying for state for the Bison was junior Keaton Bissonnette, who earned his first state tournament win when he defeated freshman Isaac Nehlich of Tri-Valley with an 18-2 technical fall in the first-round wrestlebacks. He however also lost a pair of matches which prevented him from medaling, as he was pinned by sophomore Gunner Johnson of Lyman (3:55) and senior Jesse Hostutler of Philip Area (2:33).

“Keaton came in as the No. 9 seed, and going in, his best chance was to win that first match and he had his chances,” Coach Ringstmeyer said. “He wrestled well in all three matches, but in those that he lost, size was a factor. Like Marcus, Keaton was also a bit undersized for his weight class this year, even though many times his strength carried him through. He had a good season and can build off of a lot of things for next year. I’m pretty certain Keaton is not done wrestling this year, he works very hard in the off-season and always looks for opportunities to get on the mat.”

As a team, the Hot Springs Bison placed 14th overall in Class “B” which is one of their highest finishes in recent history. They scored a total of 38.5 points, which was second-highest of any other team from Region 4B, behind only Philip Area who placed third overall with 176 points.

“Our team finish of 14th was a nice reward to the hard work they guys put in,” added Ringstmeyer. “It’s been a while since we’ve been top 15.”

Fellow Region 4B teams Custer, placed 20th place with 22 points, while Lyman and Mobridge-Pollock each tied for 34th place with only 5 points apiece. All three of those teams had beaten Hot Springs at the Region 4B Tournament in Stanley County the previous week and sent more wrestlers to the state tournament.