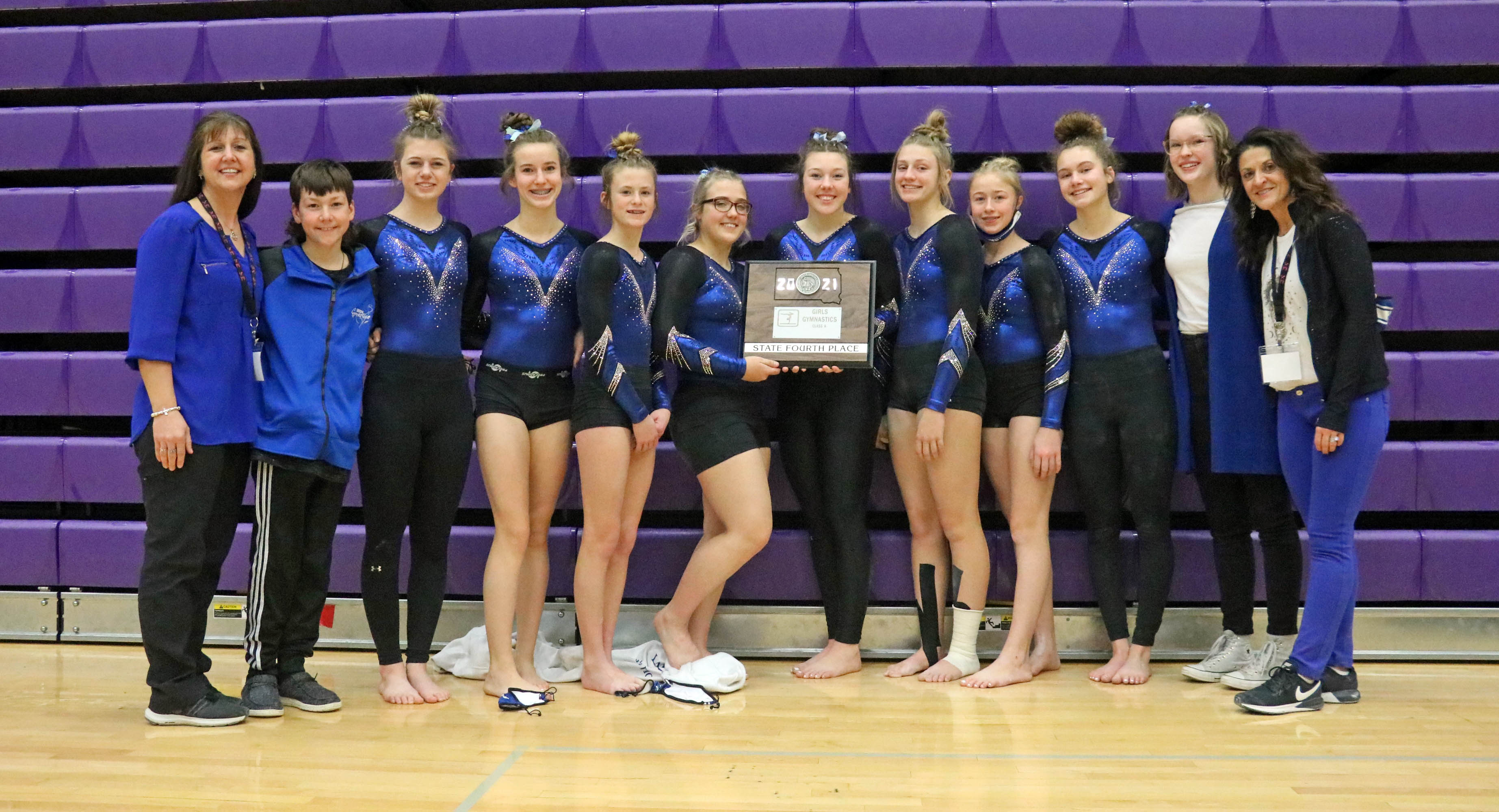 Nachtigall places 5th on vault, Allen is 7th on beam

WATERTOWN – The State “A” Gymnastics Championship couldn’t have started much better for the third-seeded Hot Springs Bison gymnasts.

For the first time all season, not a single fall was recorded during Hot Springs’ five beam routines in the opening rotation as freshman Kiera Allen started it off with a team-best, no-fall score of 8.7. Her four teammates then followed suit including sophomore Jaylen Nachtigall (7.95), senior Jessi Schroeder (8.175), eighth-grader Peyton Stewart (8.425) and then senior Aerial Bochmann (7.875).

“To start the meet with five stuck beam routines was crazy,” said Hot Springs head coach Dana Nachtigall. “Aerial was very emotional and she was the last one up, and just told me how proud she was of everyone but then had to compose herself to finish it off for this team. They started their meet as best as they possibly could.”

After the great start, unfortunately the remaining three events didn’t go quite as well, including a shoulder injury to Allen on the floor exercise in the second rotation which prevented the freshman from performing for her team on both vault and uneven bars.

“We had to quickly make some adjustments during the meet when Kiera hurt her shoulder, which is never easy, but there is a reason we are able to have two alternates on each event, and they have to be ready in a second,” Coach Nachtigall said. “The girls stepped up and did their best.”

But despite those issues that occurred midway through the competition, the team still scored a total of 132.025 points which placed them fourth overall and just .4 away from their goal of at least third place in the state.

“While the girls were a bit disappointed at first with their fourth place finish, by only four-tenths of a point, I just could not have been more proud of them,” said Coach Nachtigall. “Though we missed third by such a short margin these girls succeeded over and over again while amazing me meet to meet. To have Jessi and Aerial, the two seniors, lead this team the whole season as they did was huge.”

One of the many changes to this year’s state meet was the fact that the individual competition took place the same time as the team competition, as opposed to having a separate day for individuals. Other changes included only awarding medals to the top-10 instead of top-20.

Hot Springs had two gymnasts earn hardware and some others just missing the top-10.

Sophomore Jaylen Nachtigall placed fifth in the state on the vault (8.875) and freshman Kiera Allen tied for seventh place on the beam (8.7).

Nachtigall also finished just out of the top-10 on two other events, including a tie for 11th place on floor with an 8.975, which was only .075 away from placing sixth overall. She was also 12th on uneven bars with a 7.675.

Other near-medal-worthy performances included an 8.425 by Peyton Stewart, which tied for 11th place on beam. She was also 15th on bars with a 7.625, despite having a fall on the event.

Despite not qualifying to compete officially in the state all-around competition due to missing the mark on balance beam at regions, Jaylen Nachtigall led her team’s all-around scores with a 33.475 which was one of her best marks of the season and would have been 11th-best overall at state.

Hot Springs’ other all-around gymnasts included Stewart with a 33.05 and Schroeder with 32.075. Allen was the team’s lone all-around competition state qualifier, but due to her injury, was unable to perform in all four events.

“This is just a strong group of athletes that love this sport and work so hard in the gym,” added Coach Nachtigall. “They have raised the bar and made it so much fun.”