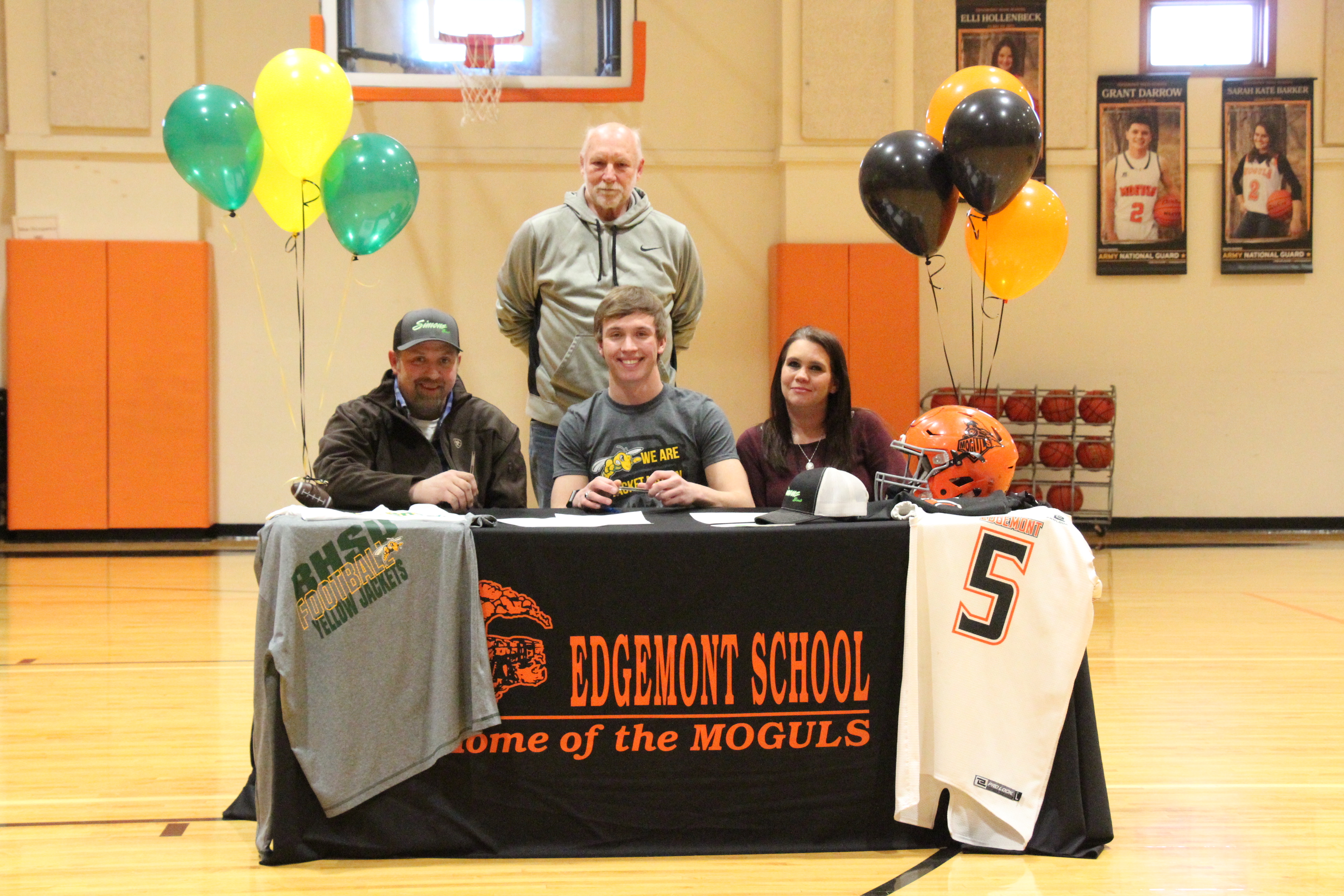 Caleb Simons is joined by his parents, Sam and Chelsie, along with Moguls Head Football Coach Eric Swanson for the signing of his letter-of-intent to play football for Black Hills State University.

EDGEMONT – Last Thursday afternoon, on Feb. 11, family and friends gathered in the gymnasium at Edgemont School to celebrate the crowning achievement for any high school athlete – an invitation to take their talents to the next level and play on a college team.

But this wasn’t just any athlete, as those who know and follow Mogul sports will be quick to tell you. Caleb Simons has cemented his spot in the Mogul record books as well as in the hearts of fans that have followed his progress for the past four years.

Following graduation from high school this upcoming spring, Caleb will head north to Spearfish and join the football program at Black Hills State University as a wide receiver/quarterback prospect. There, he will join another Edgemont High School alumnus, Lathen Stevens who will be in his final season next year on the Yellow Jackets football team.

At BHSU, Caleb plans to major in accounting and become a certified public accountant with the goal of working for a larger corporation or business.

Listening to his former coaches describe Caleb, all the way back to his middle school years, a recurring theme was his focus and all-business approach to both football and basketball.

Moguls head football coach Eric Swanson said he might not be the biggest or fastest player that he’s coached through the years, but that few would rival Caleb in terms of his intelligence or “smarts” as he put it. The most frequently mentioned attribute was his work ethic and dedication, whether it was in regard to the weight room and conditioning or his daily effort in practice.

So it comes as no surprise that Caleb was voted All-Conference in football for four years as a high school player, and was twice nominated for the All-State team. Few players can say they scored 10 touchdowns or rushed for over 350 yards in a single game, which Caleb can say he did do. On the defensive side of the ball, he’s had multiple games with 10 or more tackles. In basketball, he’s cranked out similarly-impressive statistics and also recently became the school’s all-time leading scorer, breaking Laura Sedlacek's former record of 1,550. He’s also been a standout sprinter and long jumper on the track team.

On the next level, Caleb might not be a slam-dunk, but he’s the kind of player that college coaches love. According to his past and current Edgemont coaches, he isn’t one to “showboat” when in action, but he works his tail off and gives it everything he’s got each time out. In all likelihood, he’ll exceed the expectations of his college coaching staff, yet no one in Edgemont will be surprised.

While those who have watched or been around Caleb as an athlete have high hopes for success, there is also reason for similar expectations for future academic achievement on the part of his classroom teachers and school administrators. They’ve seen him make honor roll for all four years of high school and be inducted into the National Honor Society.

When asked about transitioning from high school to college, where there’s nobody telling you when to get up or how to prioritize your time, Caleb feels assured he’s ready for the change.

“I think the transition going in to college won’t be to tough,” he said. “Getting my classes will be pretty easy to get figured out and getting up on my own is something I’ve been doing already, so that won’t be a problem.” The hardest part of going away to college, he says, is not being around his family as much, but at the same time he seems ready to embrace the independence that comes with being a young adult.

What are his most memorable experiences?

“A few things I’ll never forget is being the state champ in Trap Shooting, breaking over 1,000 points in basketball and rushing for 10 TDs in one football game.”

For Moguls fans, these accomplishments will be easy to recall, but it’ll take a while to get used to not seeing the ever-present, hard-working kid donning the #5 or #22 jersey willing to do anything asked of him.