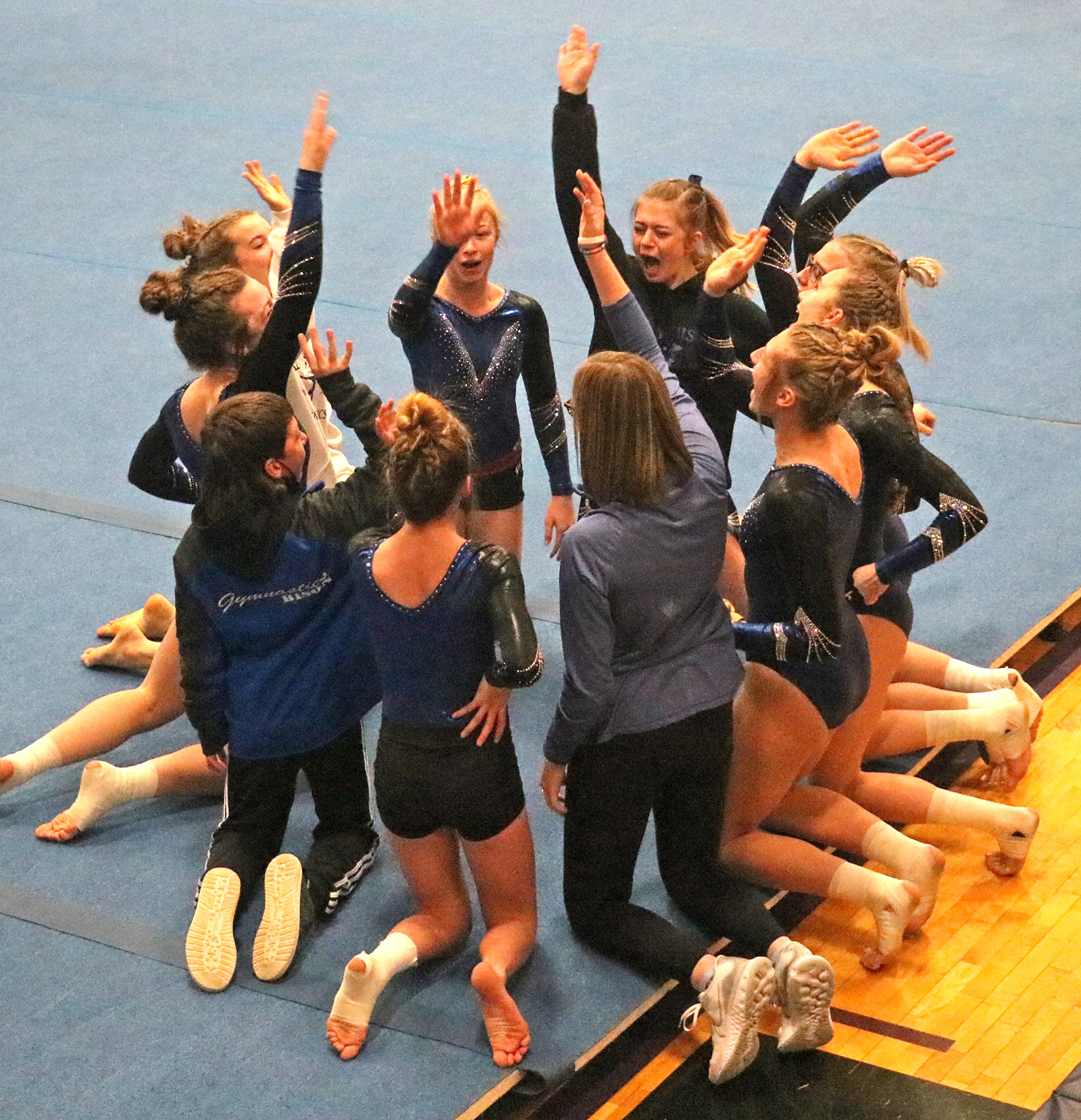 Members of the Hot Springs Bison gymnastics team celebrate together on the floor after learning they set a new school record by scoring 135.75 points in a meet.

FORT PIERRE – The sport of gymnastics is most accurately characterized as an “individual team” sport. And while it’s true only one Hot Springs Bison gymnast performed at a time during this past weekend’s seven-team Stanley County Hula Luau, the sense of “team” was likely never on display more as all eight Bison gymnasts anxiously awaited the flash of their teammates’ individual scores on each event.

According to head coach Dana Nachtigall, one of the goals of this year’s Bison gymnastics team was to break the 10-year old team record of 132.25, set in the 2010-11 season by Carlie Weiss, Cassidy Schoenfelder, Kylie Van Wagoner, Chandel Weiss and Morgan Smart.

That previous mark was not only beaten this past Saturday, Jan. 9, it was shattered, as the 2020-21 Bison gymnasts surpassed it by 3.5 points and scored 135.75, en route to a first place team win.

“The girls had a big goal to break this record,” said Coach Nachtigall. “After they recently scored two 131s in a row, I think their confidence level raised, and instead of them talking about ‘wanting’ to break the record, they kept telling us they ‘were going to’ break the record and this past weekend was going to be it. Everything really just aligned for us at this meet, they were excited they were confident they were focused and it never wavered.”

With a team score of more than three points higher than their nearest competition, the meet’s final all-around standings also demonstrated how important the sense of “team” is to this year’s Bison gymnasts, as the top-three individuals at the meet were all from elsewhere – proving how Hot Springs relies on all of their athletes to contribute to that final team score.

Other Bison gymnasts earning a medals were senior Jessi Schroeder, who placed second on bars (8.25), and freshman Kiera Allen, who was fifth on bars (8.05).

Schroeder, who is one of two seniors on this year’s team and earned an all-time high all-around score of 33.65 at this meet, was even more excited afterwards about her team’s overall success.

“Being a part of this team is truly a blessing,” Schroeder said afterwards. “I am honored to be a senior this year and to be able to share this moment with this amazing team. Each and every one of these girls have worked hard to reach this goal. It’s been the team’s ultimate goal since I began competing in 6th grade.

She added how everything just came together for them this past weekend and how proud she was watching everyone give it their all and compete for one another.

“If someone happened to fall short on an event, the team didn’t hesitate to pick them back up. I honestly couldn’t imagine being surrounded by anyone else and the moment that we broke the record will forever be one of my favorite gymnastics memories,” said Schroeder.

Fellow senior Aerial Bochmann – who also put up some of her highest marks of her career on beam (8.15), floor (8.75) and vault (8.7) – was equally as proud of her teammate’s accomplishments.

“To finally break this record senior year, that we’ve been pushing for as long as I can remember, brings rest of the team and I huge amounts of joy and pride,” Bochmann said. “Me and Jessi both have older sisters we watched try to break that record, so it’s huge for us to be able to do it.

“Jessi was the best senior I could possibly ask for, and we both know that we couldn’t do it without the rest of our amazing team and coaches,” said Bochmann. “This record reminds me why I do it, why I love this sport and this team. While part of me hopes this is a long-standing record, the rest of me hopes to see these girls break it again and again after I’m gone, so they too can feel the same excitement and pride that comes with it.

Bochmann added, “It was definitely one of those moments where nothing we did individually mattered, the only thing we cared about was the team. My hope is that this record continues to push future Bison gymnasts for years to come.”

Another Bison gymnast who competed was sophomore Jenna Ellis, whose bar score of 7.65 contributed to the overall team score, which takes the top-four scores from each of the four events. Freshman Carlie DeBoer and junior Jillian Simunek also competed and supported their teammates.

This weekend, the Bison gymnasts will have their toughest test to date as they travel to compete in Madison on Saturday, Jan. 16, in a large meet that will feature most all of the Class “A” schools in the state.