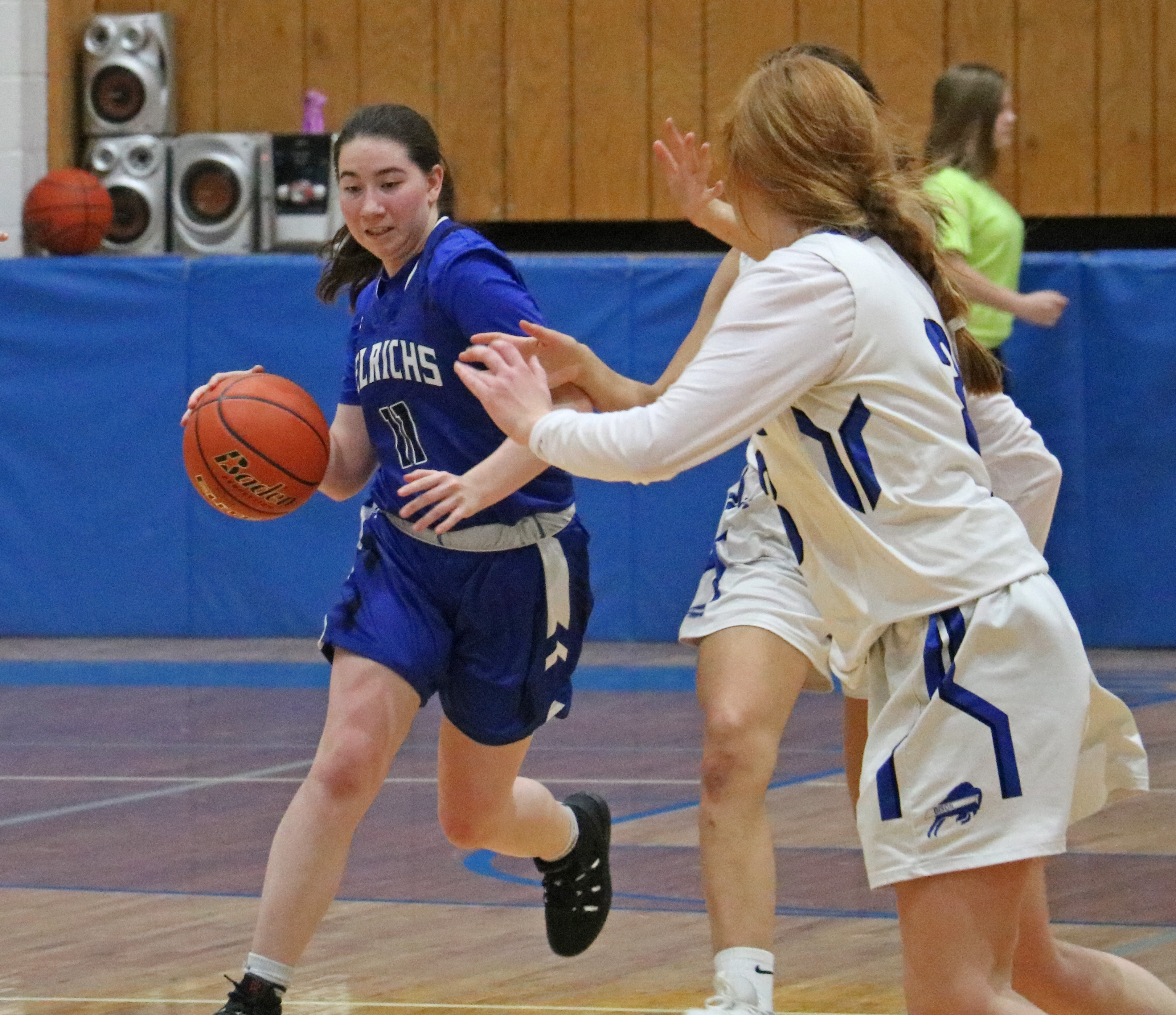 Oelrichs' Jada Rouillard dribbles the ball upcourt in a game played last year at Case Auditorium versus the Hot Springs Lady Bison. This year, both Hot Springs and Edgemont plan on playing winter sports, including basketball, but Oelrichs is planning to follow their plan from the fall sports season and not having athletics this winter. The Oelrichs School Board is encouraging students to transfer if they would like to play sports.

OELRICHS – This past fall sports season featured play from only two of Fall River County’s high schools in Hot Springs and Edgemont, after Oelrichs suspended its football and volleyball seasons due to COVID-19 precautionary measures in-line with Oglala Sioux Tribe (OST) Ordinance No: 20-18. The ordinance, according to Oelrichs school officials, prohibits students who reside on the Pine Ridge Indian Reservation from participating in school-sanctioned sporting events.

While the vast majority of Oelrichs’ student body resides on Pine Ridge – in and around the nearby community of Oglala 26 miles to the east – some students do reside closer to Oelrichs in Fall River County. Those students were given the opportunity to choose on-line or in-person classes, in consideration of potentially exposing students and their families to COVID-19.

According to Oelrichs Principal Darla Peterson, there are about 130 students district-wide, with 62 of those in grades 9-12. Of those 62 students, only five or six are taking in-person classes currently with the others all doing on-line.

With the upcoming winter sports season for boys’ and girls’ basketball looming, the Oelrichs School Board met for their regular monthly meeting last Monday, Nov. 9, and decided to continue to follow their COVID Reopening Plan from the fall and not have winter sports either.

The decision sparked strong criticism from at least one parent, T’mara Twiss of Oelrichs, who attended last week’s school board meeting and has two daughters hoping to play basketball this year, including senior Jada Rouillard who has been a student at Oelrichs since kindergarten and her younger sister T’lea Twiss, who is a sophomore.

In a press release submitted to the Fall River County Herald-Star last week, Oelrichs School Board President David Osmotherly stated, “Since the arrival of the COVID-19 pandemic the Oelrichs School District has been focused on the delivery of educational materials (both in person and virtually) and food to our students.  That will continue to be our focus so long as the pandemic continues.”

In regards to the school continuing to follow this past fall’s COVID Reopening Plan, Osmotherly stated that the decision was in-line with guidance from the South Dakota High School Athletics Association (SDHSAA), South Dakota Dept Education, South Dakota Dept of Health and OST Ordinance No: 20-18.

Twiss however feels the Oelrichs School Board failed to work hard enough to meet the needs of students like her daughters, who live off of the reservation but were willing to find their own transportation to the school for practices and games.

During the Nov. 9 school board meeting, Twiss inquired about the possibility of Oelrichs co-oping with Hot Springs for basketball but was told that there was not enough time to work out all of the details of such an endeavor, considering, at that time, there were only 10 days until the scheduled start of practice.

Twiss then expressed her disappointment with that reasoning, citing that since there was no volleyball in the fall, there should have been ample time for the board to begin making plans of how they planned to address winter sports.

In a phone interview with Hot Springs Activities Director Charles Hruby last week, he confirmed reaching out to Oelrichs Activities Director Katie Bauder earlier this year stating that Hot Springs would be available to listen to ideas about assisting Oelrichs with their winter sports. Hruby however said there has not been a request to move forward with that conversation.

While Hruby said Hot Springs would be willing to listen to ideas, that in no way confirmed a co-op would indeed take place and would be subject to board approval while considering Hot Springs’ own COVID-19 precautions.

In a phone interview with Oelrichs School CEO/Superintendent Dr. Mitchell Stone, he said a co-op agreement is a longterm solution for sports and doing so with Hot Springs was not something they wanted to explore at this time. He added that Oelrichs has grand plans for the the future of their athletic program to stand alone, which includes building a new school and gymnasium.

Rather than pursuing a co-op with Hot Springs, Osmotherly said the Oelrichs School District is encouraging parents who desire to have their child participate in winter sports, to follow the rules adopted by the SDHSAA

“Students may open enroll into another school districts for the season and then return to the Oelrichs School District,” Osmotherly stated in the press release. “We encourage parents to explore this available option for their children who are interested in participating in winter sports. Hopefully, in the not too distant future, the District will be able to resume all forms of activities for our students.”

Hot Springs AD Hruby referred to this option as the “hardship rule” which SDHSAA has made available to students whose normal school has canceled sports. However, once a student transfers to play sports, they are then bound to maintain enrollment at that school for at least the end of that particular sports season before transferring back, even if their original school later decides to restart their sports program.

Neither of the current two options available – transfer or don’t play – are avenues that T’mara Twiss’s two daughters want to take.

“Jada wants to finish her senior year on her own team and with her Oelrichs teammates,” Twiss said in a recent phone interview, as she explained how co-oping with Hot Springs would have been the next-best thing if Oelrichs wasn’t going to have their own team this season.

She said that the school board’s lack of planning ahead for the winter season is forcing her two daughters to transfer, even though they would both rather stay enrolled in Oelrichs. She wishes that the school district would have made more of an effort to communicate to other students and encouraged those who wanted to play basketball to enroll for in-person classes, if that was one of the deciding factors to have an Oelrichs team.

Twiss stated she was concerned that part of what was motivating the school for their decision to play this year was based on something personal towards herself and her two daughters, due to some previous issues she has had with the district.

“This hurts my kids, and if they say they’re here for the kids, why aren’t they willing to do what’s best for the kids,” Twiss said, adding that she wasn’t sure yet if either of her two daughters would be transferring to Hot Springs or not, to play basketball this year.

Compounding the hard time her daughters were having last week with learning they would not be able to play basketball in Oelrichs, was the grief they were enduring after learning of the Nov. 7 suicide of a former classmate Tracy Allen “Beb” Dreaming Bear, who attended school off-and-on at Oelrichs. She died just a week after celebrating her 19th birthday.

Twiss said she felt not having high school sports, like basketball, is a contributing factor for teen suicide, as it’s a much-needed part of their social-interaction with their friends.

CEO Dr. Stone said the Oelrichs School District, like all school districts, is dealing with a difficult situation in keeping their students safe from COVID-19, and trying to do the best they can.