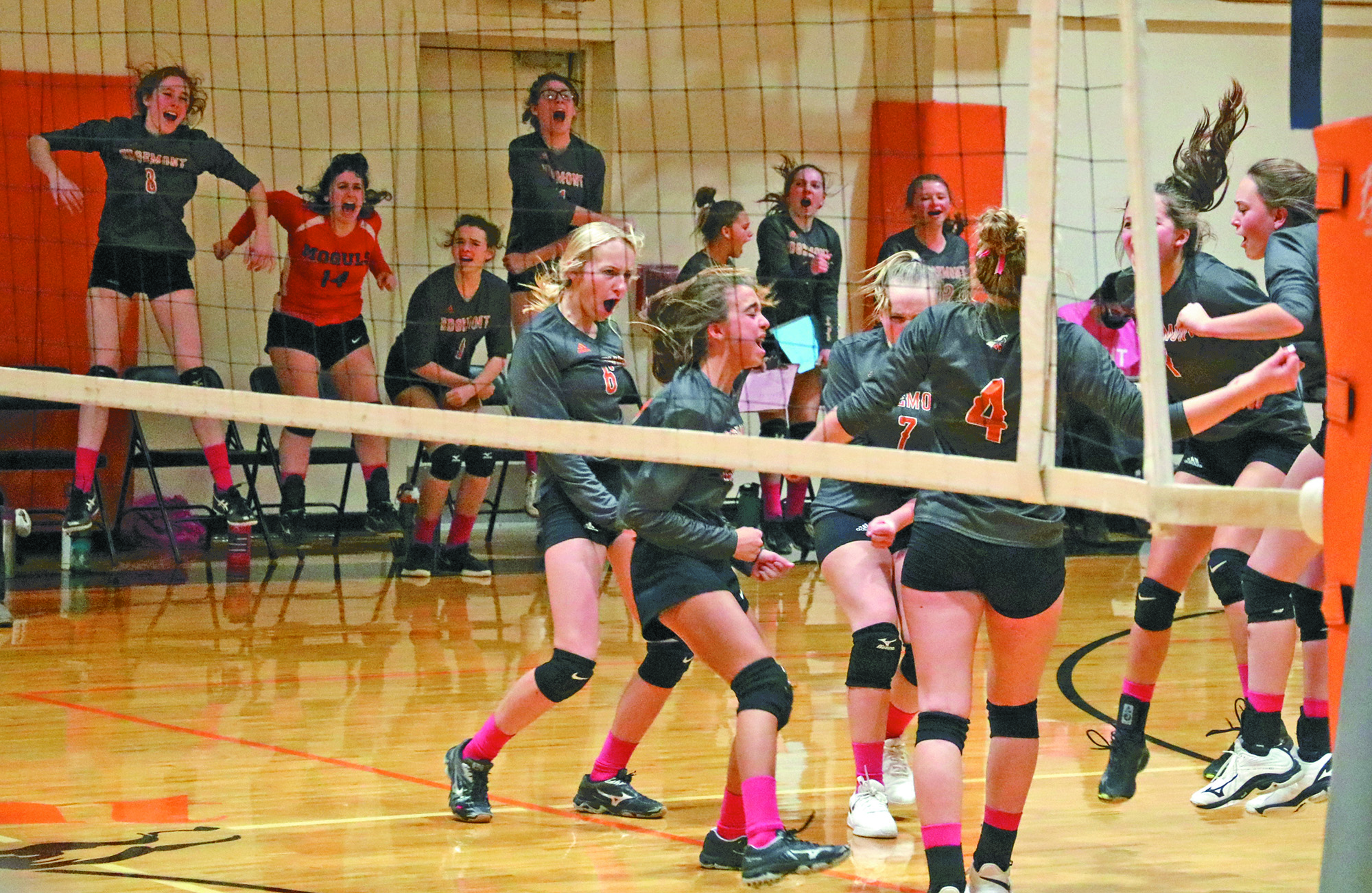 Members of the Edgemont Lady Moguls volleyball team celebrate together after defeating the Hot Springs Lady Bison in four sets this past Monday night in Edgemont.

The game was the third time the two in-county rivals had faced one another this year. Hot Springs won the first meeting 2-0 at the Custer Invitational on Aug. 29 while Edgemont won the second meeting 3-2 in Hot Springs on Oct. 5.

In their final meeting on Monday, the Lady Moguls took command early in the first set as they jumped out to a 5-0 lead and then held on to win 25-17, despite Hot Springs coming back and taking the lead midway through the set.

The Lady Bison bounced back in the second set and won 25-21. Hot Springs held the advantage throughout most of the game in this one, after breaking an early 5-5 tie.

The third set was another back-and-forth battle which ended in Edgemont’s favor 27-25. Hot Springs found themselves down 10-16 at one point in the set, but came back to go up 20-18. They then went on to serve for game-point while up 24-22, but were denied. The Lady Moguls then outscored the Lady Bison 5-1 down to stretch to earn the victory.

The Lady Moguls then won the fourth set 25-22, after leading from start to finish.

“It was another close one,” said Edgemont head coach Susan Ostenson after the game. “It seems we play that way when we meet up with our neighbors! I was proud of our girls who stepped up tonight to meet the challenge of playing a good team.”

“We have had a couple of ‘off’ games, but tonight everyone did her part and we played together as a team well,” Coach Ostenson said. “Bridget came out to be a force on the net well when Peyton was in the back row. Kaitlin (Gerard), Sierra (Morse), and Tavian (Urban) all played good defense and Kali (Schmidt) came in to help us out when we needed her. Olivia (Ellstrom) also played good D, had some great served, and stepped up to hit some balls tonight, too.”

The win improved Edgemont’s season record to 12-11 which places them fifth overall in the Region 7B standings and sets up a first round playoff match up versus fourth place New Underwood (13-8) on the road, Tuesday, Nov. 3. The winner advances to the next round where they will take on the winner of No. 1 Philip (12-6) vs. unseeded Lyman (1-15) on Thursday, Nov. 5.

For Hot Springs, it was another tough loss, as they fell to 5-15 on the season despite taking many of their opponents to four or five sets this year.

“We were up and down having some really good moments and too many mental errors,” said Hot Springs head coach Tanna White. “We struggled passing throughout the night with the low ceiling in that gym and just got in our own heads. We had some great offensive kills early but then struggled towards the end of the night at the net.

“Too many doubts crept in as mental errors increased in order to beat a tough Edgemont team,” Coach White said. “They really do a great job of covering the floor and filling holes and I commend them for that. There wasn’t one thing tonight that brought us down, it was a lot of little things and lack of mental toughness against an Edgemont team that came to play.”

“We had some bright and shining moments of great play but our issue right now is consistency,” White added. “We have too many highs and lows and need to fine tune to become consistent and have the confidence we need to get the job done.”

Hot Springs will travel to Rapid City Christian (26-4) on Thursday, Nov. 5, for the first round of the Region 8A playoffs. The winner of the contest will will be a SoDak 16 qualifier and will then be one win away from making it to the state tournament.