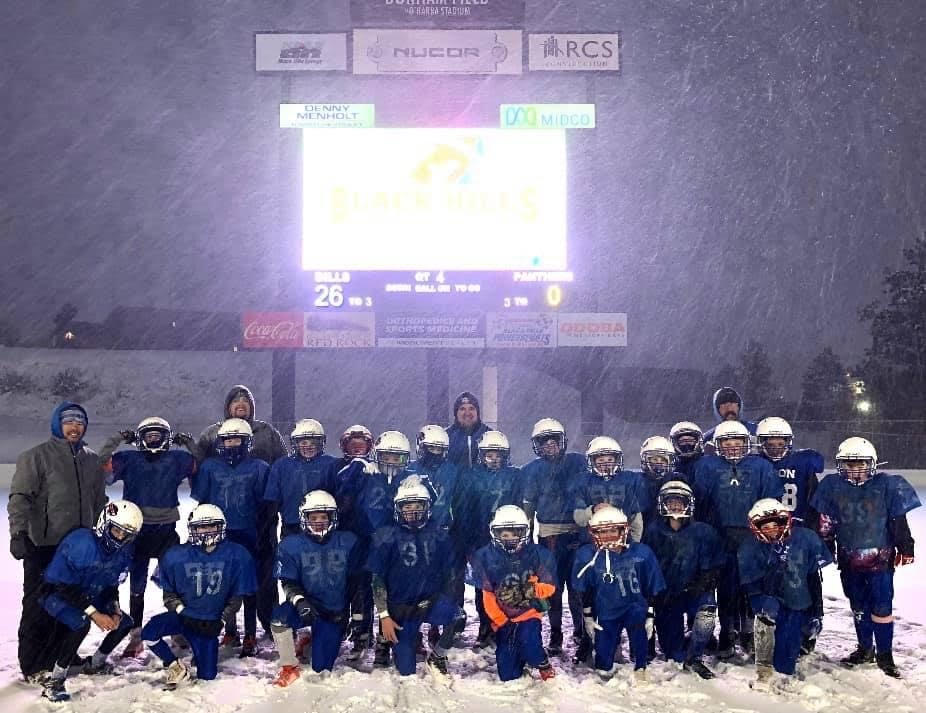 The Hot Springs Bills PeeWees (5th/6th graders) shutout the Piedmont Panthers on Oct. 24 in their seminfinal matchup, which set up this past weekend's Black Hills Youth Football League Super Bowl game. That game was however won by the Rams, 42-6.

RAPID CITY – Following a dominating performance on Oct. 24, in which they shutout the Piedmont Valley Panthers by a score of 26-0, the Hot Springs Bills PeeWees team qualified for this past weekend's Black Hills Youth Footall League Super Bowl!

Despite losing this past Sunday's Super Bowl game on Nov. 1 to the Spearfish Rams by a score of 6-42, the loss was only the second defeat suffered by the team this season as they finished the year with a record of 6-2. Both of the team's losses were to the Rams.

Prior to competing in the Super Bowl game, head coach Mike Close described how the team qualfied for the 'big game' by first blowing out the Panthers on Oct. 24. He said the game was played in 18-degree, wet and snowy conditions, but that didn’t slow down the fired-up Bills team, which jumped out to a 20-0 lead at the half, which held their opponent to only three first downs the entire game.

The 5th/6th Grade Bills opened up their scoring in the first quarter with a 40-yard drive which culminated with a two-year touchdown run by Hunter Kunz. The team then added to that six-point lead in the second quarter on a 50-yard drive, which included a 20-yard TD run by Caleb Kleinsasser. The team was then successful on a two-point conversion on a pass from Cooper Cuny to Kunz, which put them up 14-0.

The Bills then put together another scoring drive later on in the second quarter which covered 40 yard on seven plays, topped off by a one yard touchdown plunge from quarterback Cooper Cuny.

Their final scoring drive was in the fourth quarter and spanned 45 yards on nine plays and included three-yard TD run by Kunz, his second of the game.

The Bills will now face the Spearfish Rams for the Black Hills Football Youth League PeeWees title this Sunday at South Dakota Tech in Rapid City, with the kickoff time yet to be determined.

Coach Close said his team runs multiple formations, including the spread, gun and twins. “But our bread and butter is the I formation with a sniffer back lined up behind the tackle.”

His Bills were hoping to 'butter their bread' this weekend versus their rival Rams, but were unfortunately denied.

“They had a hard time with the elements,” said Coach Close. “Knox Cuny got hurt early in the game and that took an emotional toll on the kids.”

He said one of the defensive highlights was Sean Campbell being a force on the defensive line. Caden Cruz scored the only TD with a under a minute left in the 4th Quarter.

“This team had an amazing season but they just came up short,” Close said.