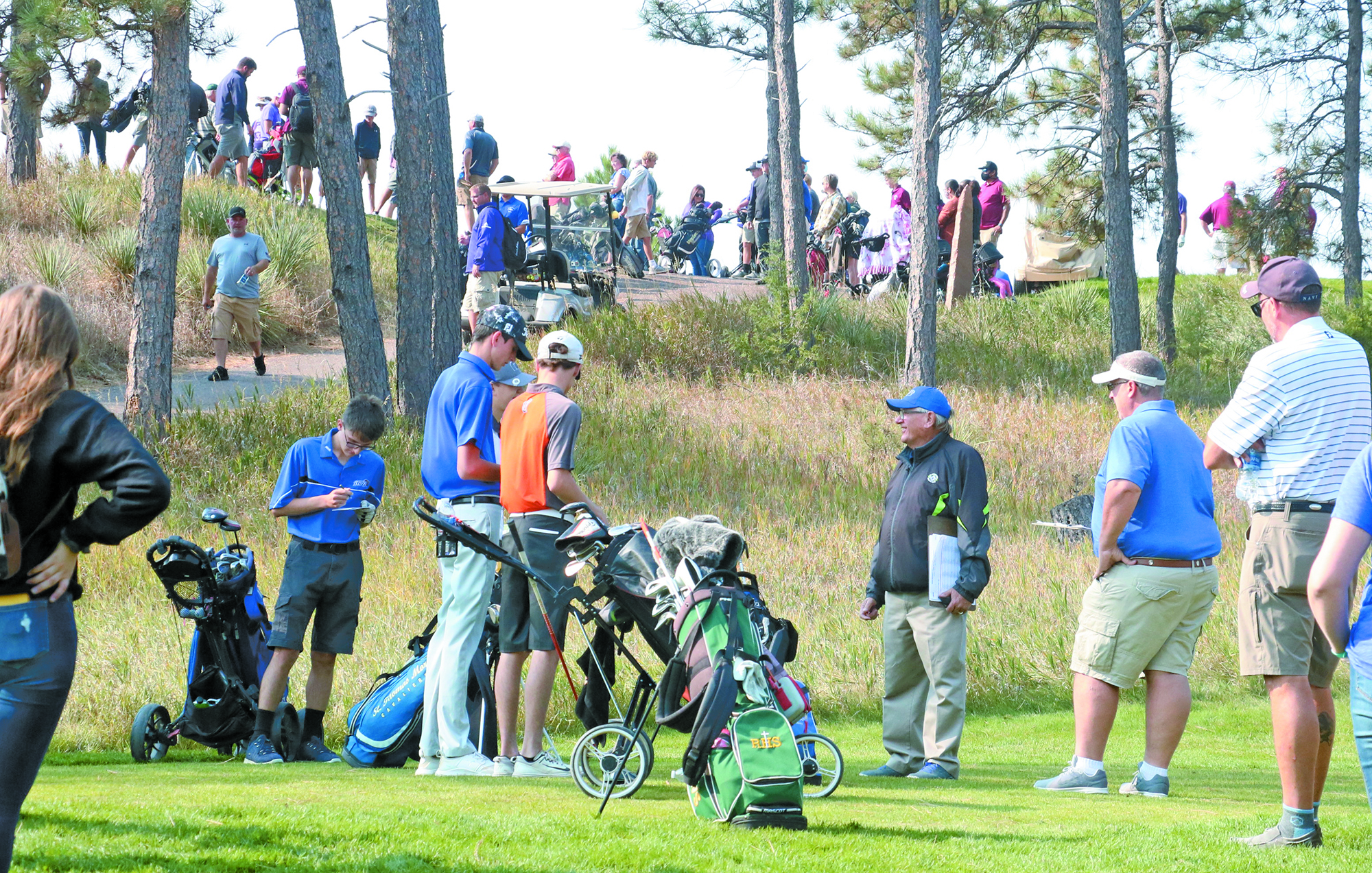 Golf course volunteers Brian Thies and Scott Haden, both of Hot Springs, get ready to send off a foursome of high school golfers from the No. 1 tee box during the first day of the State Class “A” Golf Championship on Monday, Oct. 5, at Southern Hills Golf Course. Included in this foursome is Hot Springs’ Jacob Harris, far left, who ended up finishing in a tie for 18th place overall in the field of 101 golfers.

HOT SPRINGS – For several days last week, the community of Hot Springs played host to the State Class “A” Boys’ Golf Championship which featured 101 golfers from 32 different schools, along with their coaches, families and friends.

The impact of the state tournament in town began over the weekend as teams arrived at their motels and began playing practice rounds, even though the tournament itself did not take place until Monday and Tuesday, Oct. 5-6.

“We were full to the hilt,” said Steve Frank with the Stay USA Hotel & Suites in Hot Springs.

Frank said players and their families began showing up at their motel on Thursday, Oct. 1 with the rest coming in Saturday and Sunday. He added that in his conversations with area dining establishments, they were very busy as well, with some offering special expanded hours including Woolly’s and Big Time Pizza.

The last time Southern Hills hosted a Boys State Golf Tournament in the fall was in 2014. The most recent state high school golf championship held in Hot Springs was in June of 2016, when the community hosted the Class “A” Girls State Championship.

The additional attention the state golf tournament caused, combined with the COVID-19 concerns which actually helped the golf industry across the country, made this year’s golf season one of the best on record for Southern Hills Golf Course.

According to clubhouse manager Kathi Jirsa, the course is currently up over 3,000 rounds compared to this same time last year. The city also attributes approximately 350 to 400 additional rounds this year specifically to hosting the state tournament.

When asked about how this year’s event in Hot Springs went – considering all of the COVID-19 precautions – compared to previous years without those considerations, Assistant Executive Director of the S.D. High School Activities Association Dr. John Krogstrand said he was very pleased.

“It perhaps goes without saying that the event doesn’t happen without a great team locally ‘on-the-ground,’” Dr. Krogstand said. “Hot Springs’ new Athletic Director, Charles Hruby, Coaches Dave Merrill, Jay Miller, Barry Vollmer, Kathy and Jason and the staff at Southern Hills were amazingly accommodating and worked together with us to lay out a plan to make the event happen, while also being cognizant of all things COVID-19.

“We limited access to the clubhouse during the event, made some adjustments along with USGA and SDGA guidelines and feel that we were able to put on a great event for all who attended.”

In regards to what he heard from attendees at the event about the course and the community of Hot Springs, Krogstrand said he wasn’t surprised that everyone had a great time in the Southern Hills.

“Without a doubt, the course is one of the finest in our state and has been for quite some time,” Krogstrand said. “The fact that we (SDHSAA) have the ability to use it in our Championship rotation is truly a privilege, and one that coaches remark on each time we hold an event in Hot Springs.”

Hot Springs Activities Director Charles Hruby, who came from East River, most recently at the Webster Area School District, said teams always enjoy coming out the Black Hills – especially to the Hot Springs golf course. He said he was aware of several players and their families making a long weekend out of it to enjoy the sites as well. The ideal weather conditions also helped make everyone’s experience enjoyable.

Krogstrand did say that they did have some challenges this year related to hotel requirements and some pandemic-related issues, but he said the work that Coach Merrill and A.D. Hruby did to mitigate those in advance and provide information out was very helpful to all involved.

“As has been shown in the past, when those challenges have been identified, Hot Springs has done a great job in rectifying those before the next event/opportunity to do so,” Krogstrand said.

Due to COVID-19 and other earlier 2020 events, including a fire which destroyed two restaurants, Hot Springs was a little more limited in offerings for dining and other services than in previous state tournament years. But despite those limitations, Krogstrand did not think it hampered any of the attendee’s experience at the event this year.

“A few restaurants featured extended hours Saturday, Sunday, Monday and Tuesday with the event in town, and hotels were more reasonable with rates as compared to the last time we were in town for an event,” Krogstrand said. “While some teams did decide to commute, either from home or from Rapid City, I believe the majority did stay in Hot Springs for the event.”

As of now, Southern Hills Golf Course is not currently on the schedule to host another state tournament through the contracted events through the 2023-23 school years. But Krogstrand said the community and course “did itself well in terms of consideration for future contracted years.”

“I would just thank the community for again being wonderful hosts for our golfers, parents, coaches and everyone involved in the Championships earlier this week,” he added. “The hospitality from many around town was noted and appreciated by our kids and coaches, and certainly, the opportunity to spend the weekend in the Black Hills in preparation to the event was one that many families took advantage of.”