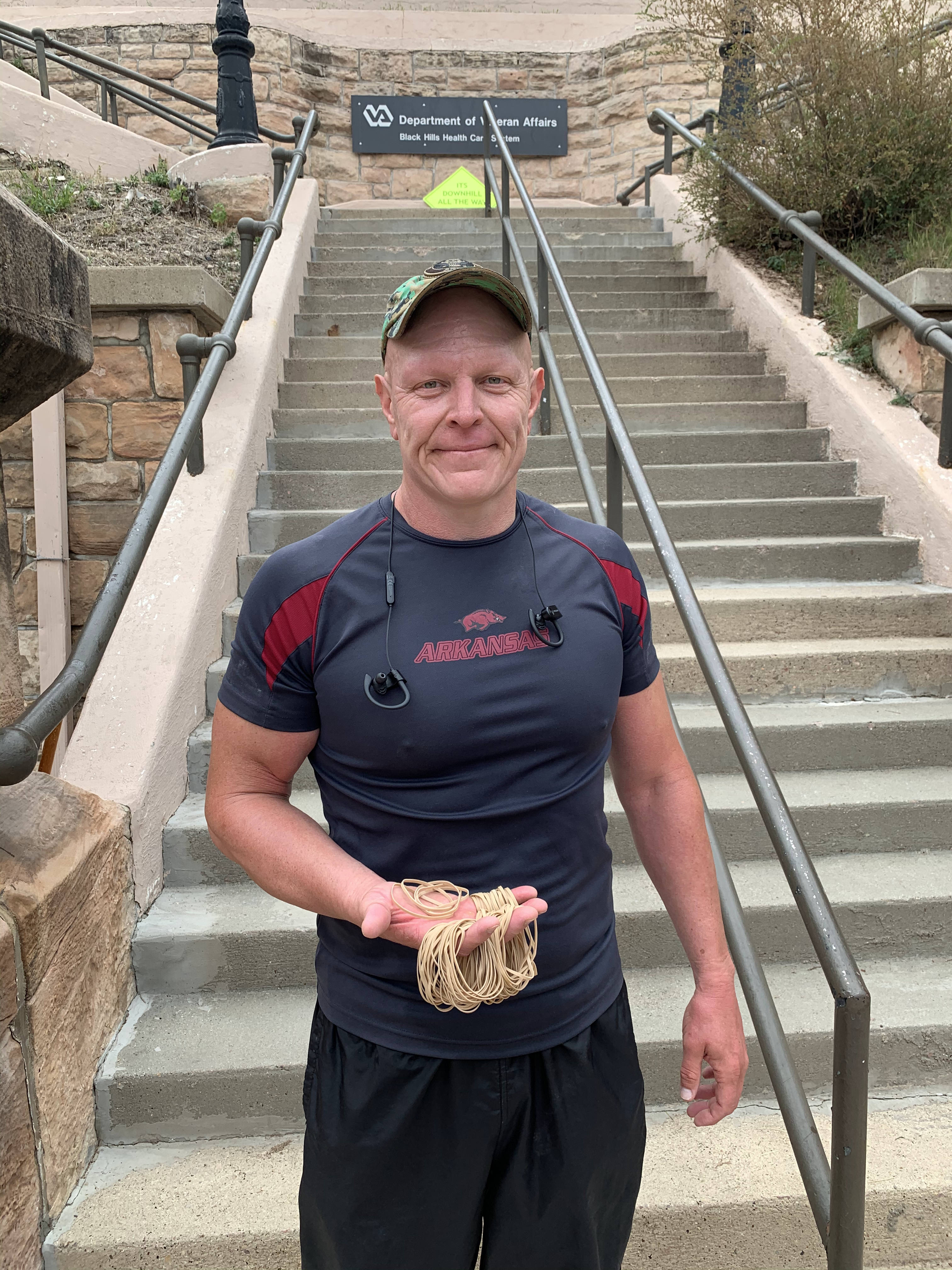 Jeremy Bertoki, 47, of Hot Springs holds 105 rubber bands, one for each flight climbed, which is a new record for the event.

HOT SPRINGS – Another meaningful and successful 9/11 Grand Stair Challenge was held in Hot Springs last Friday, Sept. 11, where, according to organizer Dusty Pence, a total of 103 people climbed a total of 1,249 flights of stairs as they memorialized the tragic events of Sept. 11, 2001.

Pence said participants came from nine different states, along with 37 others from outside of Fall River County, including several tourists who happened upon the event and joined in – including Priceps of Las Vegas, Romanian immigrants to the United States. The oldest climber was 74 years-old while the youngest was just one-year-old, Grayson Novotny.

Hal Glanville of Hot Springs, age 71, proved that you can get stronger as you get older. In 2018, Glanvilee got up from his scooter and climbed once, a crutch in one hand and the stair rail in the other. In 2018 he climbed four times. “This year he climbed six times,” Pence said.

“Margo Allen of Rapid City, who is 40-years-old, was diagnosed with cancer 11 years ago on September 11,” Pence said. “She came down from Rapid City with the goal to climb 30 times, representing two World Trade Towers, plus 11 flights representing the 11 years since her cancer diagnosis, celebrating that she is cancer free today. She was successful!”

“This year, Jeremy decided to take the record, and did it, climbing 105 times, or the equivalent of seven times up and down one World Trade Tower,” Pence said.

Also participating this year were the Blue Knights International Law Enforcement Motorcycle Club, which was in Hot Springs for their Midwest Conference.

“They rumbled to the stairs with a motorcycle honor procession,” Pence said. “Frank Bergmark represented the Blue Knights leading the Flight of Silence, carrying the American flag. Many Blue Knights climbed at least one flight with us before conducting a parade through town, including tours through the State Home grounds, Pine Hills and the VA campus before returning to the stairs for one more trip past the stairs.”

Other participants in the event included former Hot Springs resident Melvin LeRoy, who is Christian recording artist and performed his original songs, Shine on Me and Climb Higher (written for 911 Grand Stair Challenge).

The event raised just over $1,600 for Challenge Dakota.