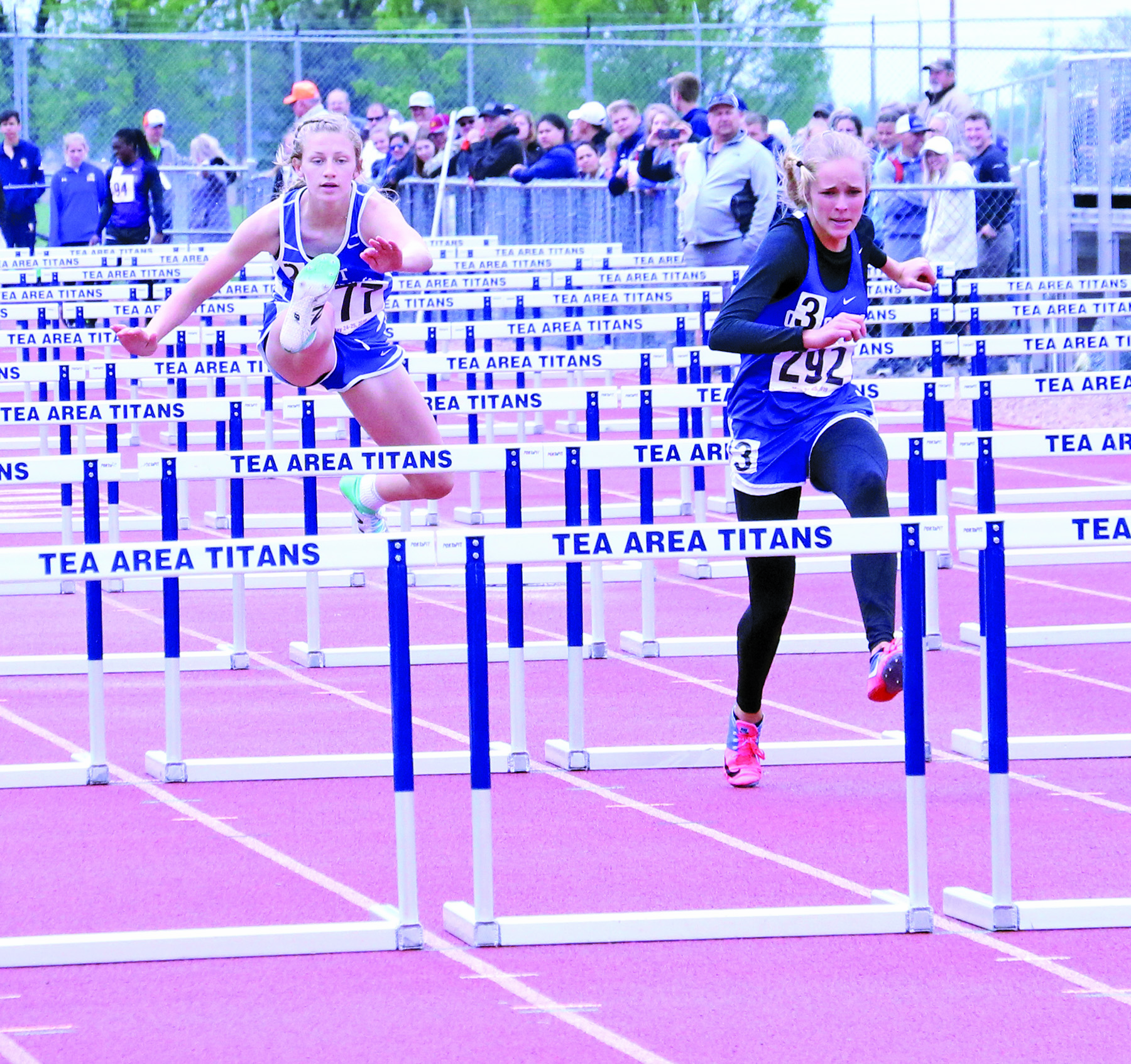 Thomas Massa, Jaylen Nachtigall, Marcus Harkless and Adam Consoer competed at the South Dakota Class A State Track meet this past weekend. The opening day was marred by a one-hour delay due to weather, which should not have surprised us at all considering the weather at the beginning of the week. The problem with the weather produced a very wet area in which to throw and jump in and so Marcus Harkless had to deal with more than just the delay, as the throwing area was very wet and muddy. Marcus did not register a mark this weekend but it was not for a lack of effort.

According to his coaches Jim Hayes and Josh Scott, Marcus went for it on each throw. I would rather have a kid do that than just limp out of the event with a half effort. That is one characteristic Marcus has, he goes for the win, no lack of pride or determination in this athlete.

Jaylen was up next in the 100m hurdle event. Participating in the first running preliminary event of the day; Jaylen ran a very smooth and clean race, however her time (16.64) was not one of the top eight required to run on Saturday. Jaylen as an 8th grade athlete and competing in her second varsity race of the year in hurdles showed the same poise that veteran hurdlers show. Jaylen was helped to this level by Neil Hohentanner, who is now on his way to starting a coaching career in Yankton. She is an amazing kid with the potential to one day stand as a medalist in not only this event but I would say that the 300m hurdles would be in her wheel house as well.

Thomas was our last competitor on Friday as he was set to run the 200m prelim. Thomas had the disadvantage of running into a pretty good head wind. Thomas’s time (24.52) did not qualify for the Saturday run; but again it was not for a lack of effort. Next year should be better for this soon to be senior. What was impressive about his track season was that he smoothed out his runs over the last two weeks. Something Coach Amanda Scott worked on with Thomas; you could see he had more power in his stride by eliminating the extra body movement.

Adam Consoer was our last athlete to run. On Saturday, Adam competed in the 1600m event, finishing 11th in a time of 4:49. Adam got out to a slow start in this race and was not able to make up ground on the lead pack, but this was Adam’s first run at the state meet. He was not happy with his race and by showing us that I know he will make a good run at state next year. Adam came off a 17th place finish at the state cross meet and with that experience and tweaking a few items here and there he should make the medal stand.

Now for the rest of the Hot Springs student body who think that only doing one sport is beneficial, I can tell you will never know what it is like to compete in front of thousands of people all cheering for everyone at the finish of an event. Yes we do not draw big crowds at other meets, but then again we are not in this sport to show off during the regular season. We do that at the state meet and it is not the chest bumps, or the elongated high fives that draws attention to these athletes; but rather it is the total exhaustion at the end of the event and the shaking of hands with other competitors as well as close finishes or an awesome throw or jump that draws the roars from the crowd. I also see volleyball, football, basketball and wrestlers that compete to make their primary sport better. I guess other schools have that much more pride in what they hope to accomplish throughout their athletic career in high school.

My final note is this, I am darn proud of the athletes who qualified for state, just as much for the kids who gave it their all who did not make the state meet. I totally appreciate the effort the kids gave on cold and wet days as well as the cool dry days; including the Saturday practices that each came to participate in and on time as well. We were blessed with some very good track kids this year and even though the numbers are small, I am very proud of their effort. We can only coach who we have out but I do feel sorry for those that chose not to come out because you missed an enjoyable time with these kids and coaches, Scott—Scott—Hohenthanner and Hayes. That wraps up another season and maybe we will see some new kids willing to work and sacrifice their effort and time to hopefully improve Hot Springs track. Maybe by hanging up the banners to show our accomplishments, we might get a few more kids out for all the sports we have. Thank you to all who came out and hope to see you again next year at track.