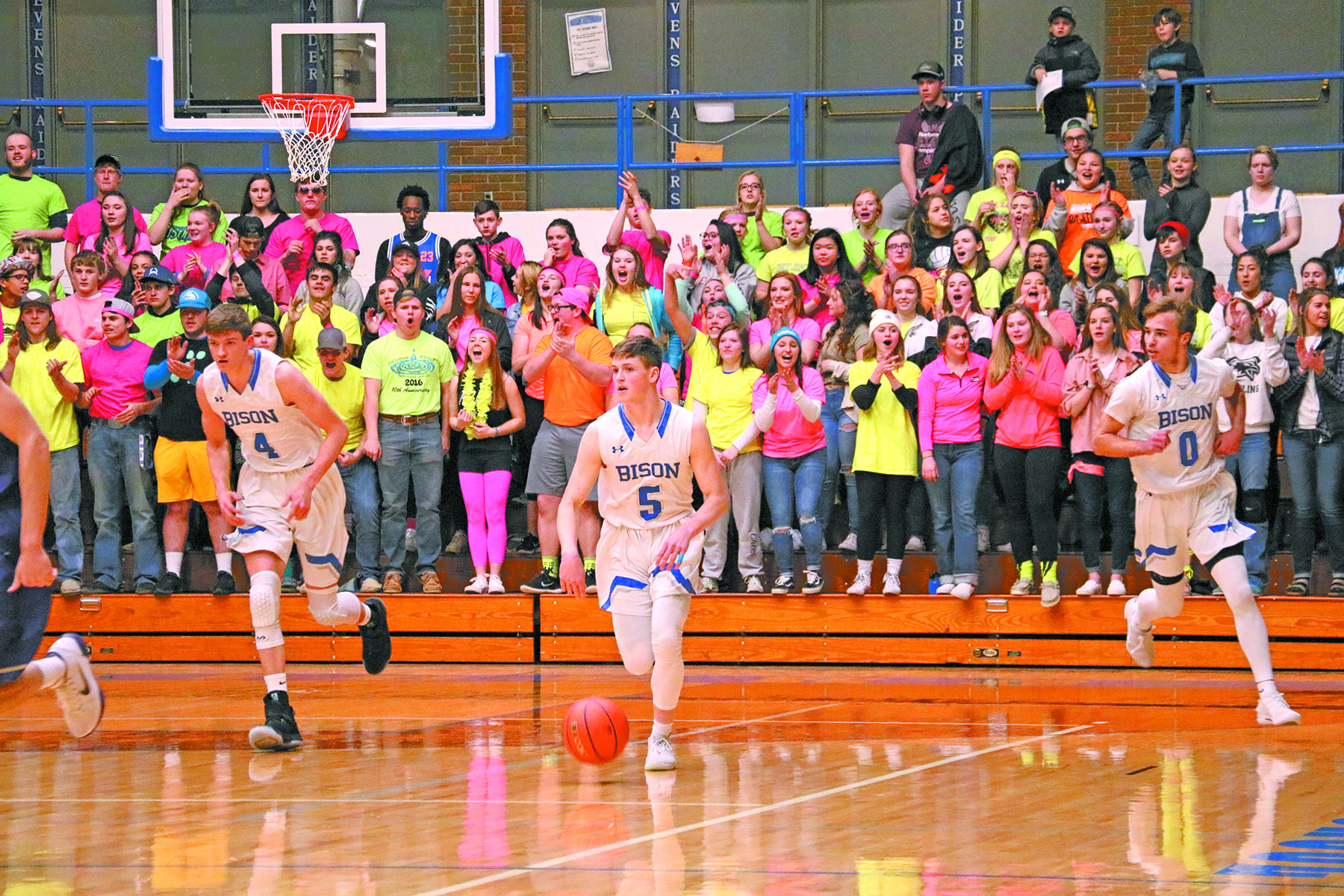 Hot Springs senior Thane Lockhart dribbles the ball up the court in transition, flanked by teammates Alex Bilbruck (4) and Morgan Harkless (0) as the bleacher full of Bison fans dressed in neon cheer them on during last week’s SoDak 16 game versus Winner, played in Rapid City. (Brett Nachtigall/Fall River County Herald)

RAPID CITY – Despite tentative starts by both teams in last Tuesday night’s boys’ basketball SoDak 16 matchup in Rapid City between the 7th-seeded Hot Springs Bison and the 10th-seeded Winner Warriors, it was the Bison who ultimately prevailed 54-41 and advanced to the school’s State Basketball Tournament appearance since 1945.

Both teams came out cold offensively as the game was scoreless through the first three minutes, until Hot Springs’ Kelton Harris finally broke the ice off the bottom of the net with a three-point bucket fired from in front of the Winner bench. The two teams then went back-and-forth and exchanged the lead the remainder of the first quarter, with the Bison holding a slight 11-9 advantage at the end of the first eight minutes.

The second quarter was much the same see-saw battle as the Bison went into the half ahead by a score of 28-27.

Feeling the heat from the “Neon Night” themed attire of the Hot Springs fans who filled one entire end of the Rapid City Stevens gymnasium, the Bison boys got hot themselves in the final period as they outscored the Warriors 16-6 and ultimately cruise to a 13-point victory.

Kelton Harris led the way for the Bison on offense with 22 points, while Bilbruck 11 followed by Matt Norton with 8 points, as well as a team-high 6 rebounds and 6 assists. Thane Lockhart also had 6 assists.

Winner was led by Brady Fritz with 20 points.

“I am very proud of this team,” said Hot Springs head coach Aaron Noteboom. “I cannot say enough about the character and work ethic of this group of young men. These boys have put in countless hours working on their game both individually and as a team. From traveling hundreds of miles to multiple team camps each summer to open gyms in 95 degree weather in the middle of the summer when everyone else was at the lake.”

The Bison (20-3 overall) enter this week’s State Class “A” Tournament as the No. 5 seed and will face No. 4 Pine Ridge (18-3) in their opening round game in Sioux Falls at the Premier Center beginning at 7 p.m. Central Time (6 p.m. Mountain).

“This is a special group and I am happy all their hardwork is paying off,” added Coach Noteboom. “We are very much looking forward to the state tournament.”