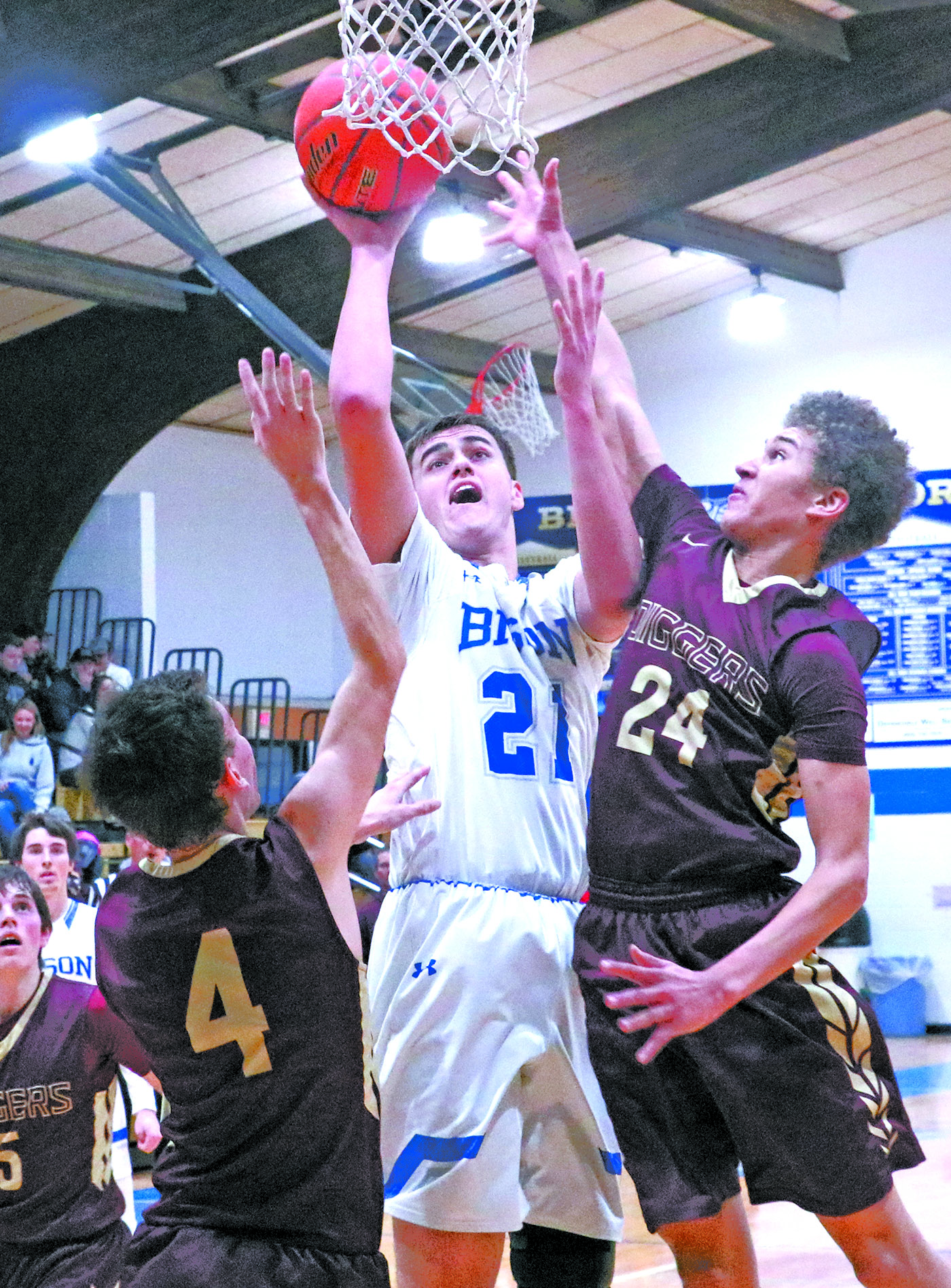 Hot Springs senior Gage Uhlir goes up for a contested shot against a group of Lead-Deadwood defenders during a home playoff game last Tuesday night Case Auditorium. Uhlir missed all of his senior year of football this year due to an ACL injury, but has bounced back healthy enough to make an impact on his team’s potential historic run in the post-season. (Photo by Brett Nachtigall/Fall River County Herald)

HOT SPRINGS – After finishing the regular season with a 17-3 record, the Hot Springs Bison boys’ basketball team last week swept through their first two opponents in Regional Tournament action and qualified as the No. 7 seed of the statewide “SoDak 16” which took place earlier this week on Tuesday, March 5, when the Bison took on No. 10 seed Winner at Rapid City Stevens.

While the final outcome of that game – and whether or not Hot Springs qualified for next week’s State Tournament in Sioux Falls – was not known prior to the printing of this week’s Herald, the manner in which they got to that point was a thrilling ride for all those involved.

Last Tuesday night at home, the Bison faced Lead-Deadwood in the first round of Region 8A action and won by a decisive score of 68-41.

Playing without their starting 6-foot, 6-inch center Alex Bilbruck for the night, senior Gage Uhlir, who is also 6-6, stepped up and helped lead the Bison with a team-high nine rebounds along with 15 points.

Lead-Deadwood was paced by Wyatt Vande Velde with 11 points.

The win over the Golddiggers then set up the much anticipated rematch versus Rapid City Christian last Friday night. The Bison had just defeated the Comets in the regular season finale on Feb. 22 by a score of 48-42, on the road.

The win for the Bison ultimately pushed them ahead of Rapid City Christian in the Region 8A power points for the overall two-seed, however, due to how and when the South Dakota High School Activities Association sets the Regional Tournament pairings, the Bison fell behind Rapid City Christian in the standings and thus had to travel once again to play the Comets on the road in the post-season.

Despite that unfortunate chain of events, the Bison boys did not let it get in the way of advancing in the post-season, as they went on to defeat Rapid City Christian on their home court for the second time in seven days, by a score of 57-52.

The game itself was a packed house with a lively atmosphere that saw the two teams compete in a tightly contested battle thoughout the night, with Hot Springs up 17-8 at the end of the first quarter but seeing that lead fluxuate and disappear at times.

Hot Springs was ahead 33-29 at the half and 41-37 at the end of the third quarter before ultimately winning by five, thanks in a big way to clutch free throw shooting.

Bilbruck was back in the lineup and was big for the Bison as he scored 19 points and grabbed 14 rebounds. Thane Lockhart scored 13 and had seven assists, while Harris also grabbed nine boards.

Rapid City Christian was led by Zane Schlabach with 19 and Levi Vandenbos with 11.

“I think we are playing our best basketball of the season right now,” said Hot Springs head coach Aaron Noteboom. “I am very proud of this team and how they have handled themselves throughout the year and in the opening rounds of the postseason.”

This past Tuesday night’s appearance in the SoDak 16 is Coach Noteboom and Hot Springs’ third consecutive season in which they have qualified as one of the top-two teams in Region 8A, and thus as one of state’s final 16 teams in Class “A”.