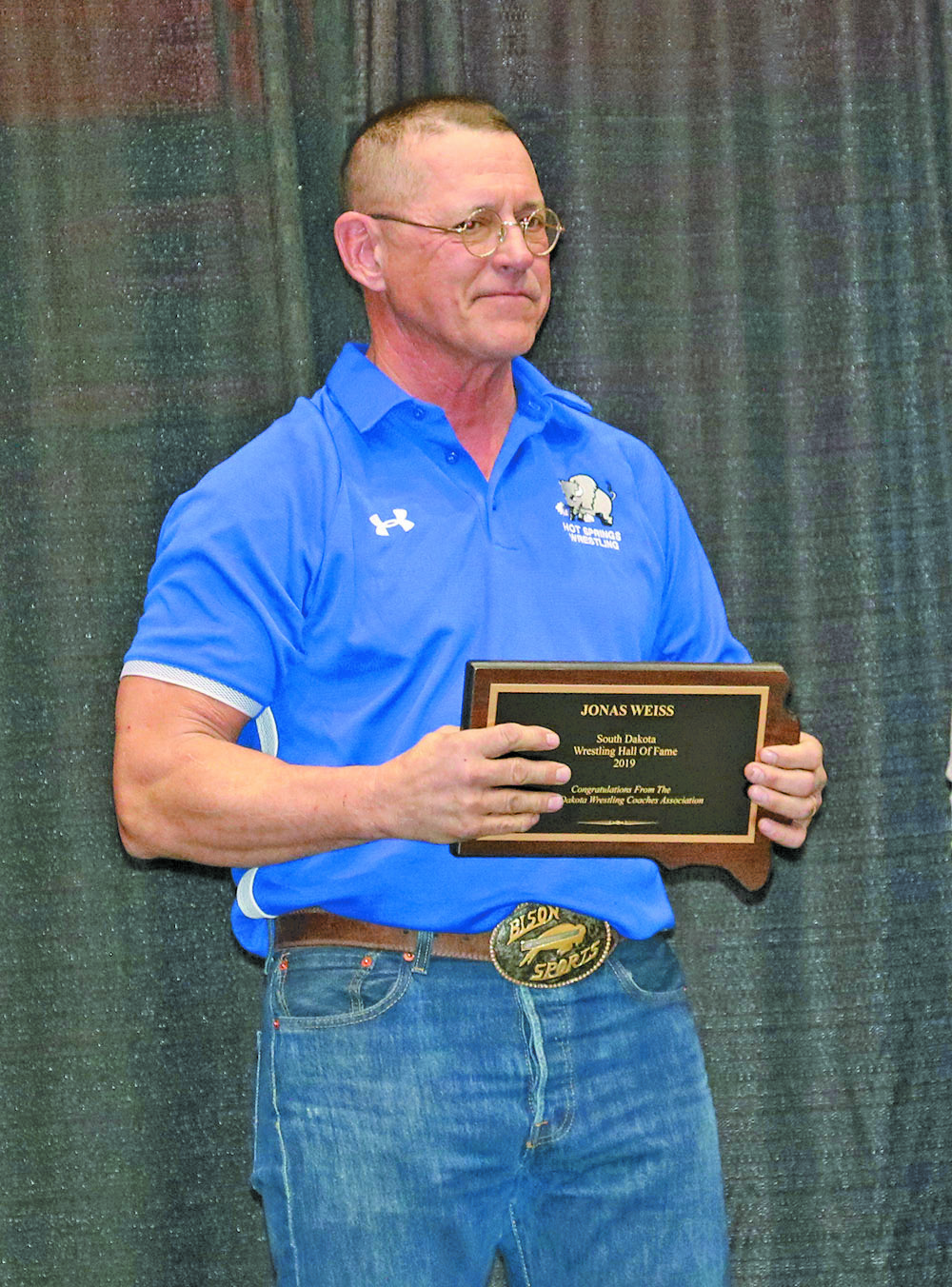 Jonas Weiss of Hot Springs stands on stage at this past weekend’s State Wrestling Championships in Rapid City after accepting a plaque signifying his induction into the South Dakota Wrestling Coaches Hall of Fame.

HOT SPRINGS – As part of this past weekend’s State Wrestling Championships in Rapid City, a total of nine wrestling coaches were inducted into the South Dakota Wrestling Coaches Association Hall of Fame.

Jonas Weiss is a proud member of the Weiss family whose roots go back to Redfield where his late father “Jarrin’ Jack” Weiss was a six-time State Golden Gloves Boxing Champion in the 1950s.

He is a graduate of Hot Springs High School and wrestled for the Bison from 1978 to 1983. After earning a teaching degree from Northern State University, he began his coaching career at McIntosh High School in 1988 and also Faith High School where he was the assistant head wrestling coach for two years before becoming the head coach of the Longhorns from 1990 to 1992.

He then moved back to his hometown of Hot Springs in 1992 where he became the assistant wrestling coach until 1996 and eventually took over as the head coach of the Bison in 1997, serving the school in that role until 2010.

During his 13 years as head coach of the Bison, he accumulated a 115-22-1 dual record, including four undefeated seasons and a string of 31 straight dual victories from 2003-2006.

In his final year as head coach, he helped lead the Bison to the 2010 State “B” Dual Championship, as well as to the podium that same season for a 3rd Place Trophy at the State Class “B” Tournament. Previous Class “A” teams of his placed 8th in both 2007 and 2009.

Jonas is currently in his 30th year as a teacher and coach in South Dakota and continues to be an “aggressive” and positive influence on young student-athletes as the head wrestling coach of the Hot Springs Middle School. He is also the school’s welding and wood shop instructor.

In the entire history of the Hot Springs Bison Wrestling Program, the school has produced seven different individual State Champions. Jonas has helped coach six of those seven wrestlers at some point of their development; with the only one he didn’t coach being his older brother Pat who was the school’s first-ever state champion in 1981.

Jonas and his wife Mary have two daughters, Randi Weiss of San Diego, Calif., and Chandel Walton of Omaha, Neb.