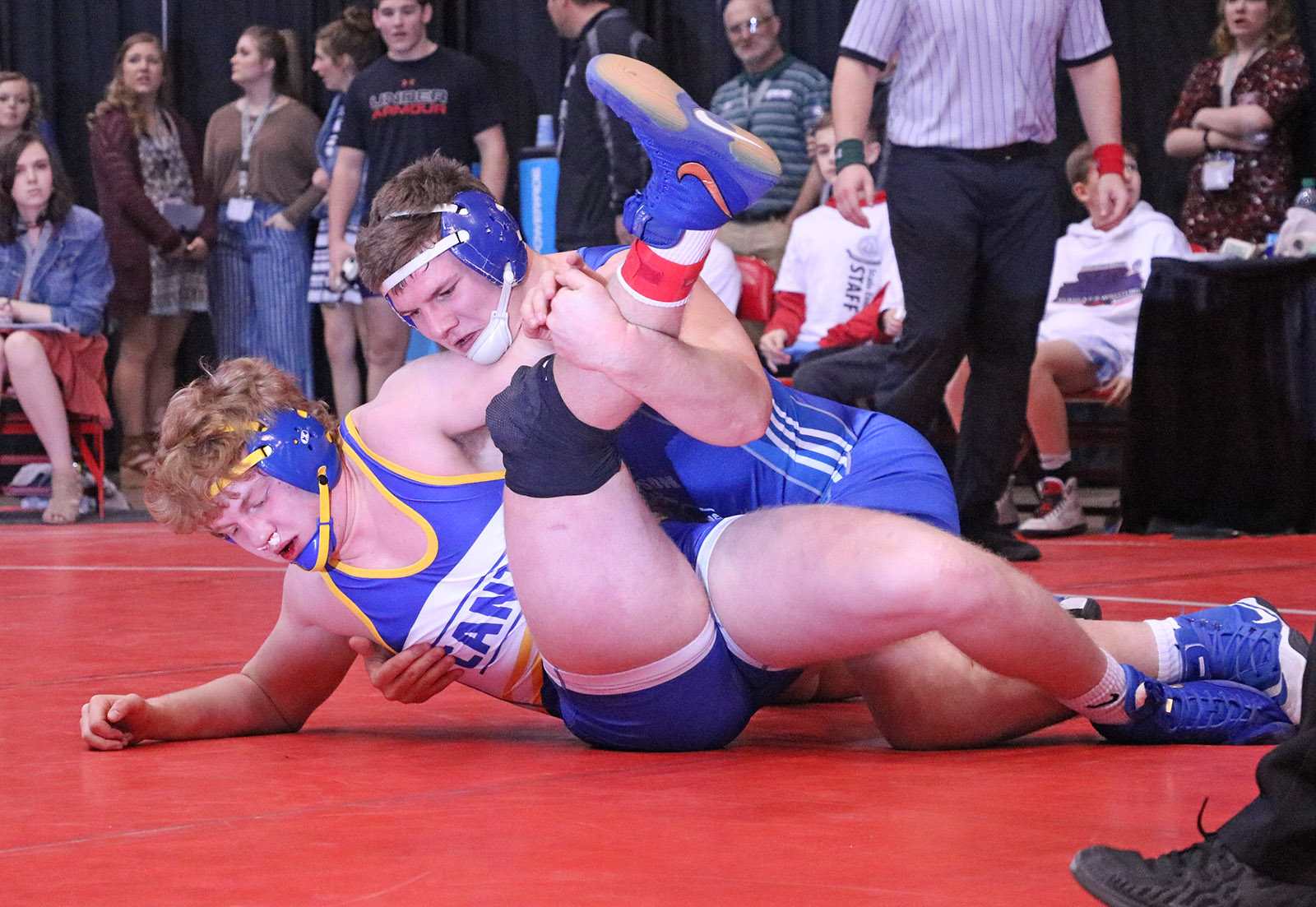 Edgemont’s Chance Grill, left, capped off his senior season with a third place medal at 152-pounds, with his only loss to eventual state champion Trevor Peters of Winner Area, by a narrow one-point decision. (Brett Nachtigall/Fall River County Herald)

RAPID CITY – With a total of 448 wrestlers from 74 different schools, this past week’s combined Class “A” and Class “B” State Wrestling Championship in Rapid City brought together South Dakota’s best high school grapplers.

Among those competing were eight from Fall River County, and in the end, half of them took the podium and were awarded medals for their performances over the two days of competition.

Edgemont senior Chance Grill and Hot Springs senior Garrett Heil each won their final matches of their high school careers to place third overall in their division of the Class “B” competition.

For the Edgemont wrestlers – Grill and Hanes – this is the first time in more than 20 years that a Mogul has donned hardware at a state wrestling meet, after the school’s wrestling program was disbanded in 2001. The school combined with Custer a few years ago, and while both Grill and Hanes qualified for state last year with Custer, neither were able to make it to the podium until this year.

For Hot Springs’ two medalist – Heil and Hagen – they both placed sixth last year as juniors, and had their sights set on placing even higher this year.

“When you can send off two good seniors like Kody and Garrett with a state medal, that is always the goal,” said Hot Springs head coach Ray Ringstmeyer. “I know they wanted a little higher on the podium, but they wrestled very tough competition and proved they were right in the mix of it.”

The combined Custer/Edgemont team placed fifth overall in the team standings and also made it to the podium as they scored 84 points and had a total of seven medalists, led by eighth-grader Jacob Brunner (113 lbs), senior Chance Grill (152 lbs) and senior Levi Mines (160 lbs) who each placed third. Other medalists included freshman Logan Graf (106 lbs) who placed fourth; junior Brennan Hanes (138 lbs) and junior Irail Griffin (145 lbs) in seventh place; and junior Micaiah Grace (170 lbs) who placed eighth.

Canton dominated the team scoring with 200 points and had two champions and two runners-up. Winner Area placed a distant second with 140.5 points but had four individual state champions, followed by Redfield Area (104) and Wagner (86).

En route to his first-ever state medal and third place finish, Grill (49-3 overall) earned a 4-1 tournament record with his only loss coming to eventual state champion Trevor Peters of Winner Area in the 152-pound semifinals (3-4 decision). Peters then went on to defeat top-seed Alex Aesoph of Faulkton Area in the championship finals (6-1 decision).

Grill defeated Ty Namanny of Kimball/White Lake/Platte-Geddes twice in the tournament, including a 3-2 decision in the quarterfinals and then again in the third place match with a 5-2 decision.

With 49 victories, and only three losses on the season, it’s of note that all three of Grill’s losses in his senior season this year came versus the two 152-pound state champions from South Dakota, of which Grill also has wins over this season as well.

Two of Grill’s losses are versus this year’s Class “A” state champion Cooper Voorhees of Rapid City Stevens, who defeated Grill 6-3 at the Rapid City Invitational and again by the same score in a dual later in the season. Grill however came back and beat Voorhees 10-7 at the Belle Fourche Invitational.

Grill’s other loss came to Class “B” champ Peters of Winner Area at the state tournament (3-4 decision), but back on Jan. 5, Grill defeated Peters by a 2-1 decision.

Much like Grill, Hot Springs’ Heil (45-5 overall) also finished with a 4-1 tournament record with his only loss coming to eventual state champion Barrett Wren of Redfield Area in the 195-pound semifinals (6-0 decision). Heil however came back from that loss with a dominating 17-2 technical fall victory over Regan Bollweg of Miller/Highmore-Harrold in the wrestlebacks to move into the third place match.

Heil then capped off his senior season with one of his best performances of his high school career, as he took out the weight class’s top-seed, Cullen Rutan of Canton, with a 9-6 decision.

Hagen finished his senior season at 145 pounds for Hot Springs with a 44-11 record overall, including a 3-3 tournament record, with two of those losses coming against Hunter Peterson of Philip Area, who was seeded No. 2 but lost in the semifinals and ended up back in the consolation bracket to face Hagen for a second time. Their first meeting ended in a narrow 4-3 decision with their final face-off coming in the fifth place match, which Peterson won by a 5-2 decision.

Hagen’s three tournament wins included a pair of pins over Trey Fortin of Warner/Northwestern (5:29) and Kurtin Mooney of Bennett County (2:08) along with a 5-3 decision over Irail Griffin of Custer.

“The 145 weight class is almost every year the most competitive weight class,” said Coach Ringstmeyer. “That’s just they way the weight class is. Most of your typical good high school athletes end up weighing right around there, so that’s no surprise, and to consistently have a placer in that weight over the past several years I think says a lot.”

“Garrett was also in a weight class that in many people’s opinions was a toss up,” added Ringstmeyer. “He battled tough, beat the No. 1 seed for third. He and Kody both should be very proud of themselves.”

Edgemont’s Hanes finished his junior year with a 20-13 record overall, including a 3-2 tournament record after winning his first round match by a 9-6 decision over Jordan Vosika of Burke/Gregory. He however then faced the eventual 138-pound state runner-up, Tate Haider of Wessington Springs/Woonsocket/Wolsey-Wessington, in the quarterfinals and lost by a 4-7 decision.

Hanes would defeat Jesse McCann of Harding County (8-1 decision) to advance to the second day and eventuall then defeat Braimen Steen of Sisseton (2-1 decision) in the seventh place medal match.

Also earning state tournament victories, but not medaling, were Hot Springs’ Marcus Harkless  (21-14 overall) at 220 pounds and Caleb Maciejewski (12-10) at 285 pounds. Each earned 1-2 records, with Harkless’s win coming in his first match with a come-from-behind 7-6 decision over Clayton Smith of Marion/Freeman, and Maciejewski’s win coming in the consolation first round when he pinned Gabe VanWormer of Deuel (:59).

In their first-ever state tournaments, 170-pound junior Teejay Atwood (25-16 overall) and 182-pound senior Chad Kelso (26-26 overall) each went 0-2 with pins in their first matches followed by close decisions in their final matches.

“Chad Kelso capped off a growth of several years of work,” Ringstmeyer said. “His competing in the state tournament is typical of one of those guys who had to work hard to just get there, and even though he didn’t earn a podium finish, he wrestled his best at his last tournament. I am very proud of his growth over the years.”

“We have three guys coming back with state tournament experience,” Coach Ringstmeyer concluded. “Marcus, TeeJay, and Caleb will be called on to lead this team next year, but it has to start now. All three are so close to that Saturday medal round, hopefully they left proud of their season, but also hungry to be on that stand on Saturday.”