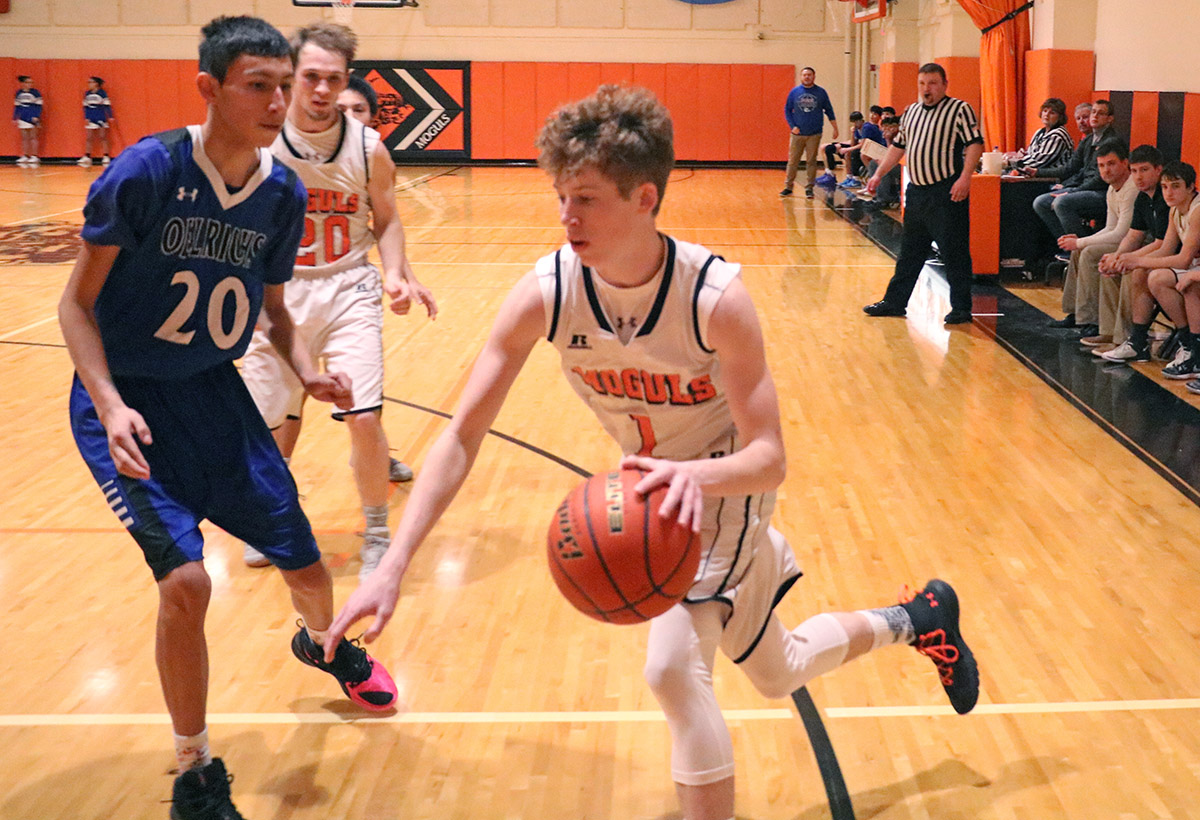 EDGEMONT – After defeating New Underwood by a score of 52-49 over the weekend on the road Saturday night, the Edgemont Moguls boys' basketball was 'on the road again' this past Monday night, Feb. 25, for the first round of the Region 7B playoffs.

Seeded 9th, the Moguls faced No. 8 seed Crazy Horse in Wanblee and were down just 35-37 at halftime but saw the game slip away in the second half, and went down in defeat by a score of 74-92.

“The boys played hard and competed tonight,” said Edgemont head coach Joe Martin. “We looked forward to this matchup and felt we had a good enough team this postseason to come out on top. The boys did all they could to extend the season one more night.”

Sophomore Caleb Simons led the team with 30 points by going 13-for-23 from the field (57%). Seniors Kaleb Darrow and Ryan Simons also had big nights in their final games of their high school careers, as Darrow scored 21 points by shooting 38% for two-point buckets and 33% for three-pointers. He also had four steals and six assists. Ryan Simons scored 14 points and was 7-for-8 from the free throw line.

“We scored a season high tonight with three players reaching double figures, by taking good shots around the rim and going to the line all night,” Coach Martin said. “We created turnovers with our pressure, but didn’t rebound effectively when given the chance.”

This was Edgemont's first meeting with Crazy Horse (8-12 overall) since the Chiefs defeated the Moguls in the opening round of the 2005 District tournament. EHS last defeated Crazy Horse during the 2000-01 season, according to Coach Martin. Crazy Horse then advanced to face No. 1 seed White River on Tuesday.

“Our seniors, all captains, will be missed by their teammates and our coaching staff,” Coach Martin said. “They gave everything they could this winter, and over the years, to leave the program on a positive note. If the boys don’t know how well they did this year, they might realize in the next 25 years how magical this season came to be.”

In their game on Saturday in New Underwood, Coach Martin was equally impressed with team in their final regular season game, which saw the Moguls earn their 10th win of the season for the first time in 25 years. The last to do it was the 1993-94 team led by seniors Justin Christopherson, Todd Peterson, and Rob Maher.

“I’m very happy for our kids, finishing the regular season on a high note was important to all of us, and we worked hard in practice preparing for the final games of our season,” Martin said. “The boys showed resiliency tonight, falling behind, losing the lead late, and ultimately prevailing.”

After opening up a 37-29 lead after three quarter, the Moguls saw their advantage disappear late in the fourth quarter as New Underwood took the lead 46-44 on a 3-pointer with 52 seconds remaining in the game. On the next possession, Caleb Simons drove and converted an “and-one” opportunity with 39 seconds left to take the lead back for good at 47-46. They eventually won by a score of 53-49, led by Simon's 23 points. Kaleb and Grant Darrow also scored nine points apiece, followed by Dalton Reutter with six points and Ryan Simons with five.

“The boys were able to convert on many free throw attempts, especially in the secnd half,” Martin said. “We played solid defense, particularly in the third quarter, and we shot well tonight despite not taking many attempts. We took six charges, which gave us momentum when our shots weren’t falling.”

“It’s been a memorable season, and I couldn’t believe the fan support we had tonight. I noticed a lot of community members without boys playing on the team taking time out of their weekend to support the kids. We’re lucky they were there.”