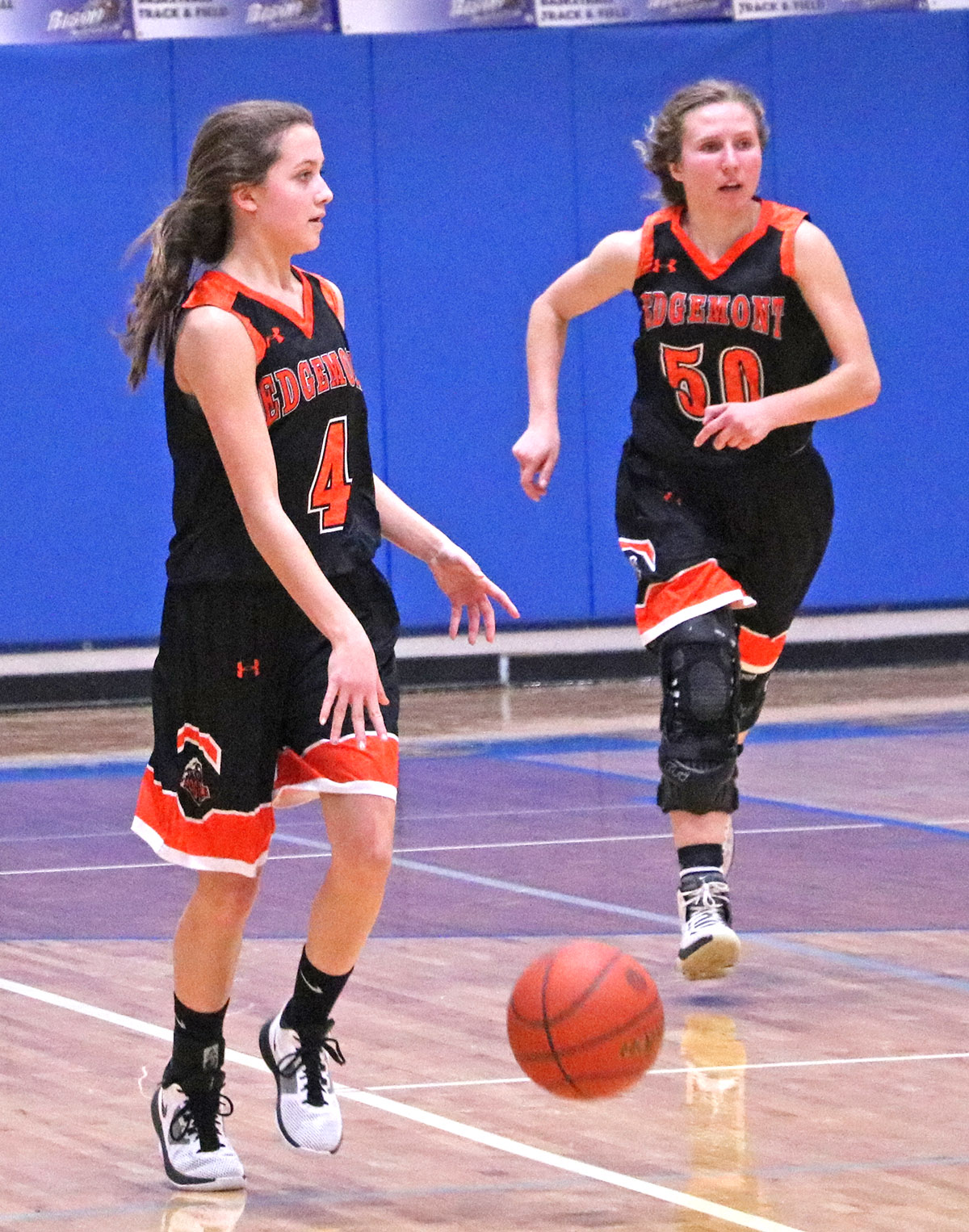 EDGEMONT – The No. 7-seeded Edgemont girls’ basketball team began post-season play last week with a 47-40 win over No. 10 seed Jones County at home on Monday, Feb. 18. They then advanced to the next round where they traveled to No. 2 seed White River, who defeated the Lady Moguls by a score of 64-44.

The loss ended Edgemont’s season with a 10-11 record, while White River went on to defeat Kadoka Area 77-60 and advance to the SoDak 16.

In the Jones County game, the Lady Moguls were down 20-27 at halftime but came back strong in the second half and outscored the visitors 27-13 to earn the victory.

“I thought the Jones Co. girls settled in an played a great game,” said Edgemont head coach Lane Ostenson. “The Lady Moguls started the game with two three pointers right off the bat to give us a 6-0 lead.  thought that might cause them to waver a bit. They came back, took the lead, and held on to the lead until the fourth quarter.”

Edgemont was led by senior Maddie Peterson with 24 points, including five 3-pointers, and freshman Morgan Peterson with 18 points and three 3-pointers. Senior Abby Tidball led the team with 11 rebounds.

“I felt that their youth had a little let down in the fourth to allow us to take the lead,” added Coach Ostenson. “I was proud of the Lady Moguls in how they played this game. They never seemed rattled and played with a sense of confidence throughout. Even though we trailed most of this game, I felt like we where going to win it.”

Versus White River, the Lady Moguls fell behind 17-32 at the half and lost more ground in the third quarter but kept pace with the higher-seed in the fourth quarter by matching them score-for-score 19-19.

“White River came out on fire,” Ostenson said. “They shot really well from the three point line in the first quarter (hitting three 3’s.) When we tried to pressure them on the perimeter they were able to drive it into the paint. They literally shot us out of our zone in the first quarter.”

“I was impressed with the way the Lady Moguls played man to man defense,” Coach Ostenson added. “Something we haven’t played much all year. We had to make an adjustment after the first quarter and our girls stepped up and played some good defense.”

Coach Ostenson said he also thanks all of you who supported the Lady Moguls this year and hopes to see everyone at the awards night on March 19 at 7 p.m.