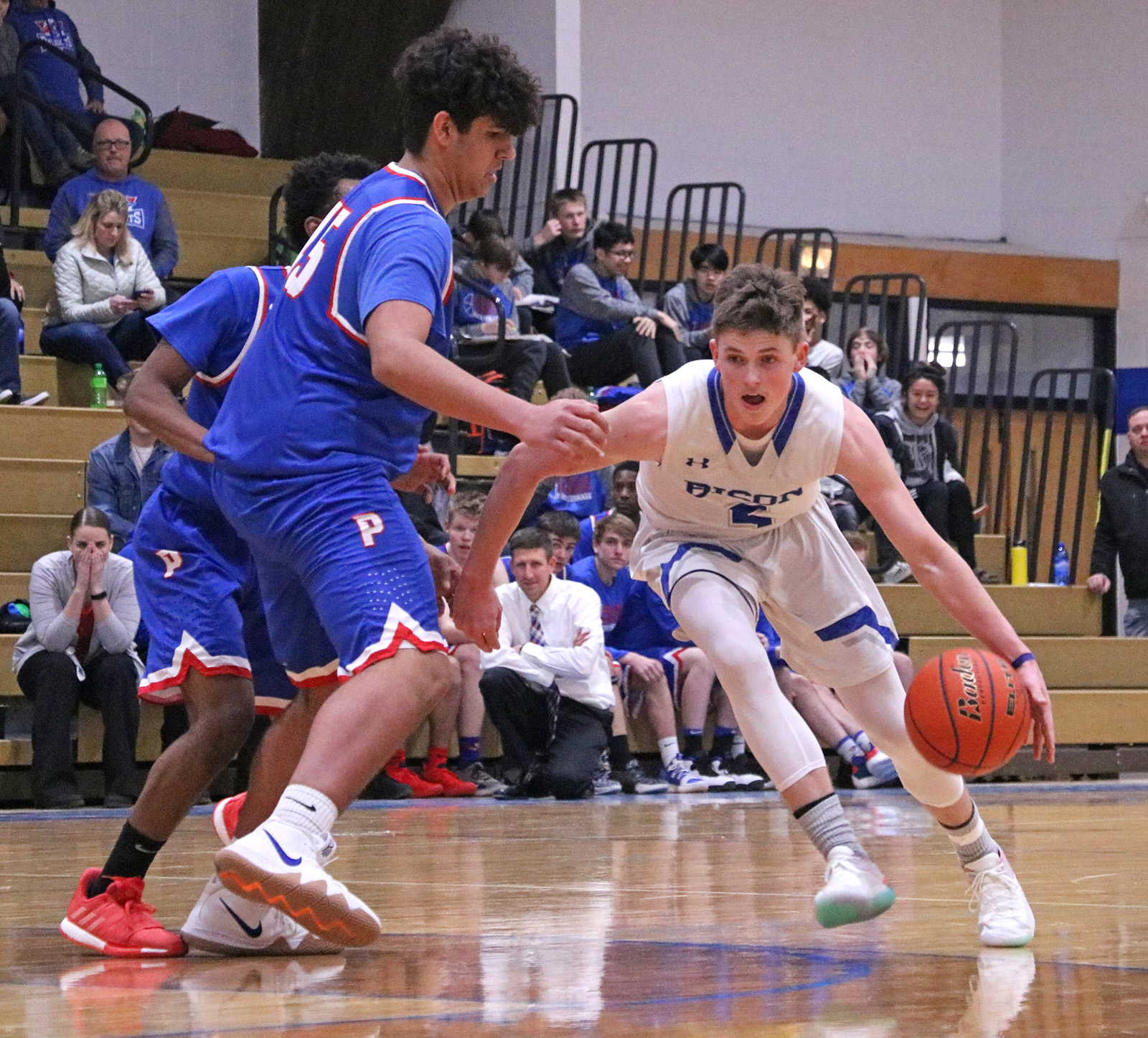 Morgan Harkless elevates above a pair of Douglas Patriot defenders during a home game played earlier this month. This past weekend, the Bison were on the road for a pair of games versus BHC foes St. Thomas More and Custer.

Hot Springs senior Thane Lockhart dribbles near the top of the key versus Douglas in a home game played earlier this month.

CUSTER – The boys basketball version of the “Southern Hills Showdown” took place in Custer this past Saturday night as the Hot Springs Bison boys defeated the Custer Wildcats for the second time this season by a final of 60-53, but once again, it wasn’t easy. The Bison defeated Custer by a score of 55-45 in the first meeting on Feb. 1.

The host Wildcats held the advantage through much of the first two quarters, including a 31-30 halftime lead. The Bison were led in the first half by the hot, three-point shooting of senior Matt Norton who earned 18 first half points, all via the long ball.

Hot Springs’ defense stiffened up in the second half as the Bison also began to spread around the scoring a bit more as Alex Bilbruck scored 10 points, Thane Lockhart added seven and Kelton Harris six – all in the second half – which propelled the Bison to take the lead and ultimately earn the seven point victory.

The scoring overall for the Bison was balanced throughout the game as they scored 15 points in each of the four quarters. Norton finished with 21 points to lead Hot Springs as teammate Morgan Harkless had a team-high five rebounds and Lockhart added seven assists. Custer was led by Jace Kelley with 23.

St. Thomas More was led by Ryder Kirsch and Ryan Wojcik who each scored 20 points apiece.

“This week was another challenging week for the boys both mentally and physically,” said Hot Springs head coach Aaron Noteboom. “Even with the stumble against STM, I felt the boys played well. St. Thomas More is a top -three team in the state and after going down big early, the boys closed the gap and had it down to 6 with 1:20 remaining.

“Unfortunately I felt we let the ‘moment’ get to us a little bit down the stretch and STM closed it out with FT’s.

“Against Custer, another slow start led to a halftime deficit, but our boys showed their resolve by coming together and out executing their opponent down the stretch,” Noteboom added.