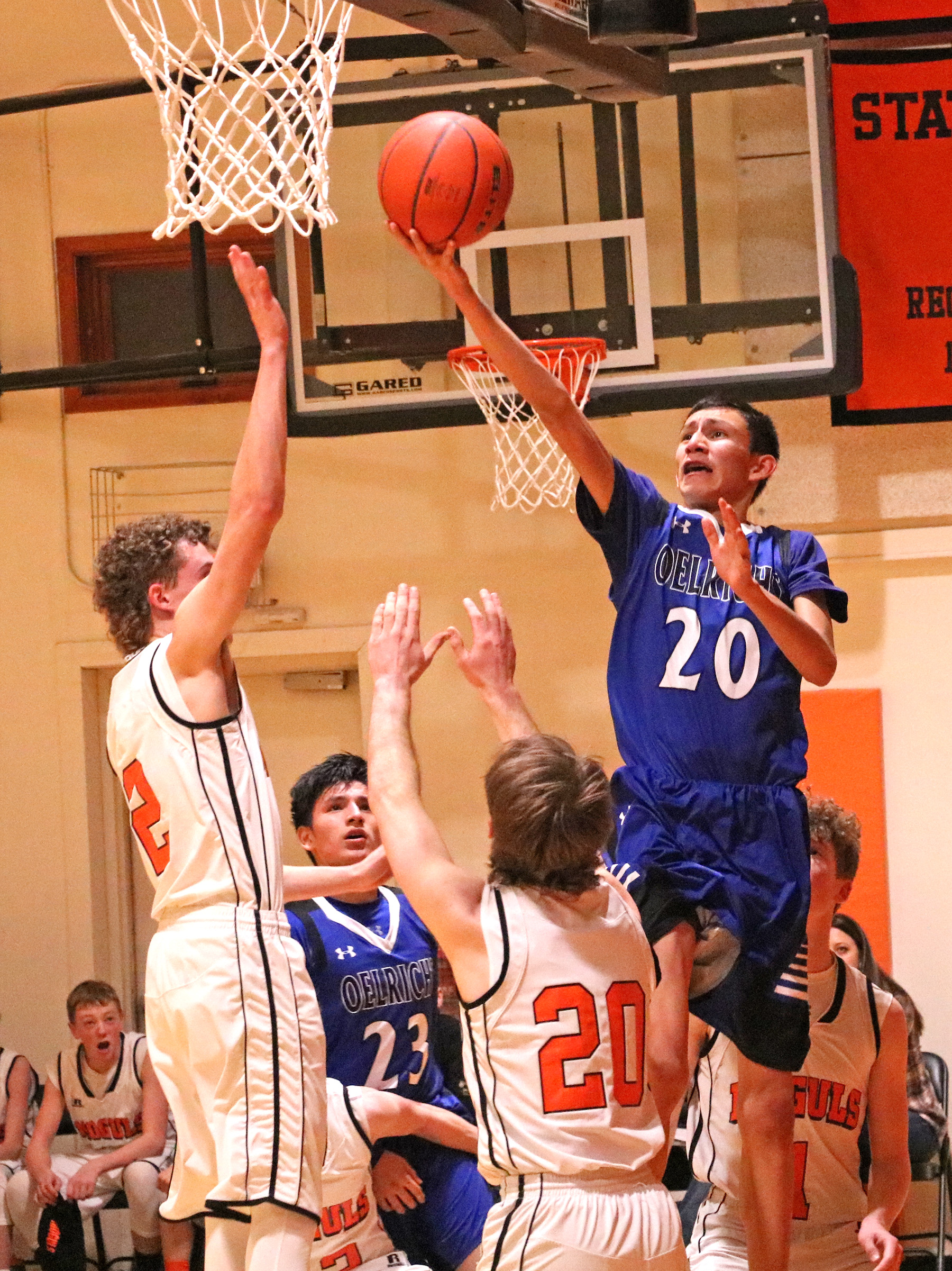 Nick Tobacco of Oelrichs drives the baseline and soars to the hoop for a finger roll lay-in versus Edgemont this past Saturday night. Tobacco matched the number on his jersey with 20 points to lead his team in an 81-61 victory.

Edgemont’s Grant Darrow drives to the hoop while being defended and pursued by Tyler Swiftwater of Oelrichs during an in-county game played in Edgemont this past weekend.

EDGEMONT – This past Saturday night in Edgemont featured a matchup of two Fall River County Region 7B teams with similar records, each looking to make a move up the standings, as the Moguls hosted the Oelrichs Tigers in a fast-paced and high scoring contest.

Led by junior Nick Tobacco’s 20 points, the Tigers jumped out to a quick 16-6 lead in the first quarter and continued to build on that throughout the contest, ultimately winning by a 20-point margin, 81-61.

Despite falling behind early, the Moguls’ starting five however battled and hustled throughout, especially in third quarter where they were down by as many as 20 points, but then fought back and came within 11 points just prior to the start of the fourth quarter.

“This was one of the best games we played this season, but we may have played Oelrichs on their best night,” said Edgemont head coach Joe Martin. “Once the second quarter started we played better offensively, but seven Tigers made three pointers tonight, making our comeback effort tough.”

In addition to Tobacco’s team-leading offensive performance, Oelrichs had three sophomore also achieve double-digit scoring including Lewis Wilson with 16, Toby Swallow with 12 and Benny Benson with 10.

They also got strong performances from their bench as a total of nine players got in the scoring column including freshman Justin Eagle with seven, freshman Ty Two Lance and sophomore Quincy Bear Robe each with six, senior Aaron Brings Him Back with three and freshman Tyler Swiftwater with one.

“We limited our turnovers and rebounded on both sides of the court, converted on many free throw’s as the game moved along, and once again had three players in double figures on our way to taking a high number of shots.”

Edgemont has lost seven straight games to Oelrichs dating back to the Moguls first round defeat of the Tigers in the 2008 District 14B Tournament, according to Coach Martin. The Moguls didn’t defeat Oelrichs until the 1931-32 season on their way to claiming the Rapid City Journal Cup’s Black Hills Conference, winning the schools first conference title.

Leading scorers for Oelrichs versus Wall were Floren Cross Dog with 28 points, Benny Benson with 20 points and Nick Tobacco with 15 points.

“We came out with a lot of energy and intensity for the entire first half and third quarter, players were active on defense and doing a good job of boxing out and rebounding over a much bigger Wall team,” said Oelrichs head coach James Knutson, after the game. “On offense we played the best game we have all year with the ball being moved around and players attacking weaknesses effectively. We maintained the lead until the last minute and really beat ourselves with some untimely technical fouls followed by bad shot selection. It was a disappointing finish to what might have been our best complete game of the season.”

The Moguls got off to an early 19-17 lead in the first quarter but then cooled down and were outscored 36-50 in the remaining three quarters.

“We had chances to control the game, but couldn’t come up with enough stops. As each half wore on we created our own trouble and gave up more points than we should have,” said Coach Martin. “The boys shot well and three of them scored double figures, they got to the free throw line during a close first half, and played aggressive defense creating a lot of steals.”