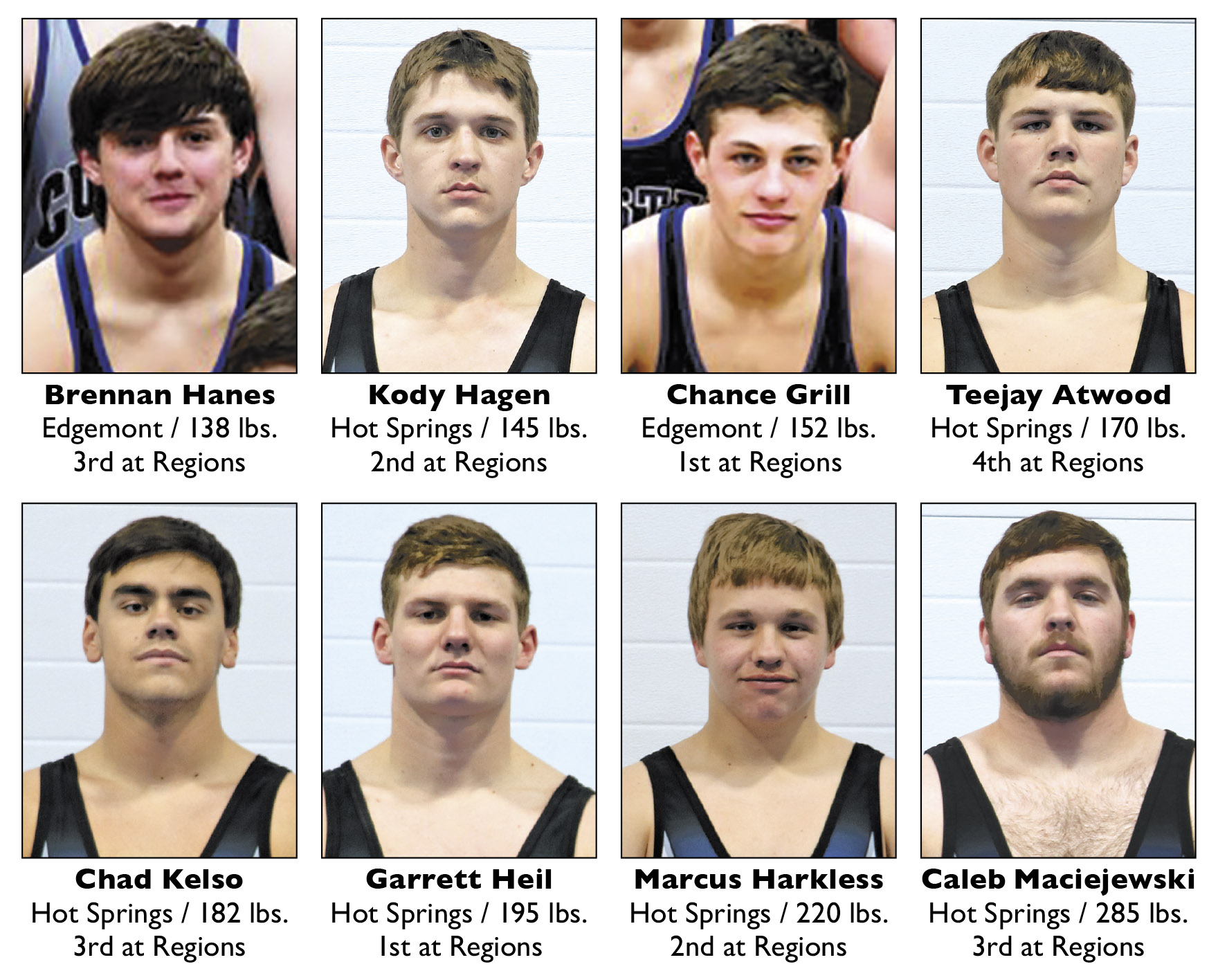 FORT PIERRE – A total of eight Fall River County high school wrestlers qualified for this week’s State Class “B” Wrestling Championship in Rapid City following top-four finishes at the Region 4B Tournament hosted by Stanley County this past weekend.

Going to State from  Edgemont, and wrestling for the combined Custer/Edgemont team, are senior Chance Grill (1st at 152 lbs) and junior Brennan Hanes (3rd at 138 lbs).

“We are happy for the six qualifiers, but as with any year, we feel we left some out there,” said Hot Springs head coach Ray Ringstmeyer. “We had three of our young guys come very close to qualifying. We easily could have put eight or nine into the state tournament, so looking at it that way, it was kind of a disappointing finish. Even still with that being the case, we had some of our best performances of the year.”

Both of the two local region champs – Edgemont’s Grill and Hot Springs’ Heil – finished with 3-0 region records en route to their individual titles in their senior year.

Heil (41-4 overall), who will get the No. 3 seed in this week’s state meet 195 pound bracket, went 3-0 in the region tournament with all of his wins coming by pin – 1:18 over Nathaniel Nelson of Stanley County, 3:49 over Ty Dailey of Custer/Edgemont and 3:53 over Victor Dennis of Philip Area in the championship finals.

Grill (45-2 overall) is ranked No. 2 in the state at 152 pounds, behind only Alex Aesoph of Faulkton. He earned a :45 pin over Jacob Washburn of Hot Springs in the quarterfinals and then a forfeit victory to Colby Fitch of Philip Area in the semifinals before defeating 9th-ranked Issac Olson of Mobridge-Pollock in the finals by a score of 7-0 decision.

Hot Springs’ Hagen and Harkless each qualified for the championship finals of their weight class but finished as the runner-up .

Hagen (41-8 overall), who will get the No. 6 seed this weekend in the Class “B” 145 pound bracket, won his first two matches at regions, including a 6-2 win over Irail Griffin of Custer in the semifinals. His only loss was to No. 2-ranked, undefeated Hunter Peterson of Philip Area in the championship finals by an 8-3 decision.

Harkless (20-11) entered the region meet as the 10th-ranked wrestler at 220 pounds and earned a 2-1 tournament record, including a 17-1 technical fall victory over Jon Keller of Mobridge-Pollock in the semifinals. His only loss was to 4th-ranked Tee Allen of Bennett County by a 1:58 pin.

Teammates Kelso and Maciejewski each won their medal matches to place third overall.

Kelso (26-24) earned a 3-1 tourney record beginning with an important 3-1 overtime/tie-breaker win over Elijah Steele of Custer in the quarterfinals. His only loss came in the semifinals versus 5th-ranked Cody Donnelly of Philip Area (2:00 pin). Kelso then defeated Josh Norder of Mobridge-Pollock (6-0 dec) and Cody Rakow of Lead-Deadwood (11-4 dec).

Maciejewski (11-8) lost his first match to No. 2-ranked Robbie Lester of Lead-Deadwood (1:41 pin) and then advanced to the third place match by forfeit where he defeated 8th-ranked Jake Ellison of Lemmon/McIntosh by a 2:03 pin.

Edgemont’s Hanes (17-11 overall) also placed third and earned a 3-1 region record including a 12-0 major decision win over Trinity Brady of Lead-Deadwood in the consolation semis and then a 7-2 decision over Jesse McCann of Harding County in the third place match.

Hot Springs junior Teejay Atwood (25-14 overall) entered the tournament as the 9th-ranked wrestler at 170 pounds earning a 2-2 region record, including a tough 5-3 overtime loss to Tegun Spring of Philip Area in the semifinals. He however then came back in his next match to qualify for state with a 17-3 major decision over Tucker Holzer of Mobridge-Pollock, but then lost by 2:31 pin to Reid Wieczorek of Stanley County in the third place match.

“Marcus showed a lot of toughness battling bronchitis while still wrestling one of his best tourneys of the year,” Coach Ringstmeyer noted. “Teejay and Caleb are setting themselves up to be our leaders next year by getting into the big show; and I am very much looking forward to how high they can place to end their careers as Wrestling Bison.”

“Donnie Abbott is one senior who came up short,” Ringstmeyer said. “Donnie has very rarely missed a practice, and has put in extra time. I sure wish he could’ve won his way into the state tourney, but it just didn’t happen. Donnie’s biggest success will be the lessons he learned from this sport and how he will put those skills to use in his real life situations as a grown man.”

Edgemont eighth-grader Cade Grill (34-21 overall) did not earn a top-four finish but had a strong tournament with a 2-2 record including a tough 6-8 sudden victory overtime loss in the quarterfinals to Max Johnson of Lead-Deadwood who placed fourth. Grill’s two wins included pins over Cord Beer of Lemmon/McIntosh (1:25) and Connor Adams of St. Thomas More (:56).

This week’s State Tournament in Rapid City begins with first round matches at 10 a.m on Friday, Feb. 22, with the second session’s Parade of Athletes beginning at 2:45 p.m. On Saturday, Feb. 23, semifinal matches get underway at 10 a.m with the placing matches starting at 4 p.m and the championship matches at 6:30 p.m.

Taking place just prior to the championship match introductions, an awards ceremony will take place where longtime Hot Springs wrestling coach Jonas Weiss will be inducted into the South Dakota Wrestling Coaches Hall of Fame.