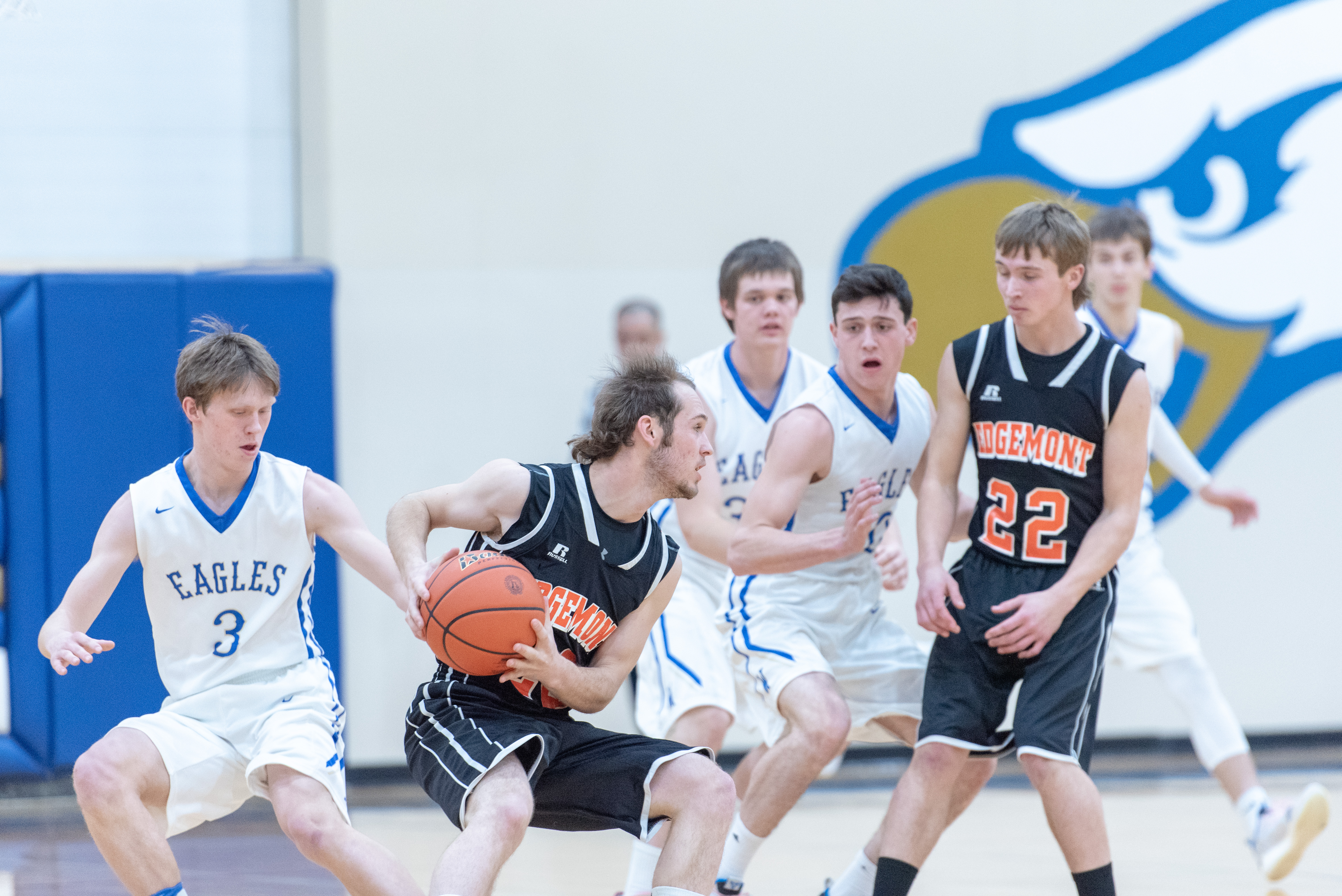 RAPID CITY – After losing a close first-round game to Wall by a score of 52-60 on the Eagles’ home court last Thursday night as part of the 37th annual West River Tournament (WRT), the Edgemont Moguls boys’ basketball team played their next two games on the consolation side of the bracket, which they won to place fifth overall. Their wins over Moorcroft (66-51) and Newell (48-47) improved their overall season record to 6-5.

According to Edgemont head coach Joe Martin, 25 years have passed since the Edgemont boys’ lone appearance in the WRT championship game losing to Newell (71-53) after defeating Hill City (57-55) and Hot Springs (59-57) in the semi-finals in 1994.

In their first game last week versus host Wall (2-6 record), the Moguls fell behind early 10-17 in the first quarter but clawed their way back to within 40-43 to start the fourth before ultimately losing by eight points. Sophomore Caleb Simons led the way with 23 points and seven rebounds. Senior teammate Kaleb Darrow scored 13, followed by fellow seniors Ryan Simons with nine and Dalton Reutter with six.

“Wall moved faster than we did and we’re disappointed about that,” said Coach Martin. “The Eagles scored easy baskets by the hoop to thwart the big run we could have made throughout the game. We stole the ball, and each one assisted each other on many made baskets. They are a tough matchup for us, but I’m curious if we played a 3rd time if we could beat them.”

Versus Moorcroft (2-11), the Moguls led throughout the contest and held a 27-23 advantage at halftime before gaining more momentum in the second half to earn the 15 point win.

“The boys bounced back nicely by taking care of the ball and shooting well while getting to the line and converting many times,” Coach Martin said. “An 8-0 run to start the fourth after taking our biggest lead of the game into the quarter was outstanding. We have a good group of basketball players and I’m happy they found a way to win this game. They rallied and encouraged each other to try harder and play smarter and it paid off.”

In the fifth place game versus Newell at the Rushmore Plaza Civic Center in Rapid City on Saturday, the Moguls came back from a 24-27 halftime deficit to earn a one point victory, which was their first win over Newell since the 1997 WRT 7th place game. The game also marked the first victory for the Moguls in Rapid City’s Civic Center since the 2001 WRT when they toppled Hulett, Wyo., by a score of 58-39 with Joel Heidebrink’s 24 points and senior Joey Martin’s 12 points and 11 rebounds.

“The boys, especially our co-captains, made it count this year,” Coach Martin said. “We went on a 6-0 run down the stretch on three critical shots and a steal in between. Up by one, each Mogul touched the ball as the shot clock wound down setting up a crucial lay-up on our last possession and the guys executed flawlessly on defense as the clock ran to zeroes.”

“I’m really proud of the boys and Coach Sylte for preparing during practice and getting a varsity squad ready to compete. We bounced back just as you would hope after losing game one of a three day tournament,” added Coach Martin.

Kaleb Darrow captured his third straight All-Tourney award, and in the process, also set the new Edgemont Boys’ Basketball career assists mark with his 180th assist on the final basket of the Newell game on Saturday. The new total passed mark previously held by Lathen Stevens who had 179 from the 2010-2016 seasons.

Caleb Simons was also named to the WRT All-Tourney Team.