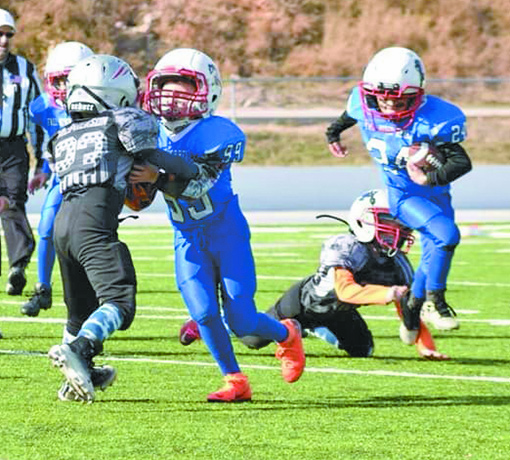 The Hot Springs Bills recently completed their 5th season in the Black Hills Youth Football League. We had 56 boys play football this year. This season was one for the record books. Our Mitey Mite team became the first Bills team to make a Super Bowl. The score board didn’t favor us at the end but these boys played their hearts out.

This season we saw many rule changes that made the game safer and more enjoyable. One major change was the Mitey Mites (1st and 2nd graders) played six man football this year instead of the regular 11-man. This was a challenging transition but the coaches and players adapted quickly. One reason the 6-man football was so fun to watch is every player is eligible to run, pass or catch the ball. This made for many high scoring games and plenty of excitement for the fans.

Another major rule change was the removal of kickoffs from the Mitey Mites and Junior PeeWee (3rd and 4th graders) games. This helped to reduce the major collisions and injuries that occur on special teams.

The commissioners from every association meet once a month throughout the year to brain storm and adopt rules to make this great game safer for the kids.

Thank you for your continued investment in the young athletes each year. Nelsons Oil and Gas sponsored the Bills cheerleaders once again. With this sponsorship they were able to purchase uniforms and warmups to be comfortable in some of our colder games. Thank you Nelsons Oil and Gas for taking care of our cheerleaders. The last and definitely not least group to thank is the Hot Springs Volunteer Fire Department. These folks have been on board since day one with our program. Every year they donate to the program so that we can purchase jerseys and much needed practice equipment. We appreciate everything you do for the community and our program.

We have a few special people to thank this year that volunteered many hours to our program. Caden Shanklin, Caleb Maciejewski and Chad Kelso volunteered at all five home dates we had this year. These high schoolers could have done many other things on a Saturday, but they chose to spend 6 hours each home date helping out at the field. Thank you gentlemen. John Notheis announced many of games including our 1st round playoff game in Rapid City. Thank you John for stepping up, helping out and doing a great job every time. Andrea Kramer and Lori Wieseler made our concession stand run flawlessly.

Many times they were the first at the field and the last to leave. Thank you ladies.

The 2019 season looks promising and we can’t wait to get started again.

At the Mitey Mite level it is the first time most boys will put on a set of pads, 2nd time at most. We as coaches start the season with two goals, learn to tackle correctly, so with that goal we will review tackling every day. 2nd, when a coach is talking all mouths are closed and all eyes are on us. So far in 3 years we have been very successful with fundamentally tackling teams that show all coaches respect. 2 huge wins that will help these boys grow to be coachable athletes and respectable students. Some may say they are only 1st and 2nd graders but we watched these boys learn to play for each other, cheer for each other and push each other in practice like young men, not little boys. while they are little boys, if you plan on letting your son play football it is a very important to get them into our program at this age. We review tackling every practice so by the time they are big and strong they have no bad habits that could injure them or their opponents. If you have any questions please feel free to contact me or Mike Close, we would love to sit down and explain our goals with for all the teams.

This year our Mitey Mite team made it to the Super Bowl! But came up short on the scoreboard, but fundamentally in the last few months what these 1st and 2nd grade boys have done is unmeasurable.

More than anything we wanted to see these boys learn to fight for each other and we got it! 2ND, TACKLE THE RIGHT WAY, we have played 3 seasons that I know of without one head injury! That's a huge “that a boy” for all coaches at all levels! The loss burns but the memories will be talked about for years!!! Future JPW... we have 8 months of fire burning inside us until we get to bring that Lombardi trophy home!!!! Can't wait for another Super Bowl run!!! Thank you parents/guardians for trusting us coaches with your boys... I will guarantee that they all will be forever burnt in all of us coaches hearts... I really mean that. Just great kids... every one of them. Thanks again... Coach Ryan Cuny

2018 was another successful season for the Hot Springs Bills JPW football team! We played in the semi final playoff game for the second year in a row and every single player on this team improved an incredible amount and the boys became an inseparable group of friends.

We started out the season on a hot streak winning four in a row and only got scored on in three of those games. After week four we hit a low spot and lost 2 in a row but that wasn’t going to stop the Bills. Week seven was a must win to make playoffs and the boys came out and played what might have been there best game and ended up with a big win. First round playoffs we had to play a very good Belle Fourche Cardinals team who we beat week four 13-0, and again we were able to dig down deep and pull of the win with another score of 13-0. For the Semi Finals playoff game we had to play the always tough Badlands Eagles and unfortunately came up short, although we lost I couldn’t have been more proud of how hard these boys fought.

The last 3 years of coaching these young men has been incredible and im honored that I have been able to do it. Unfortunately this will be my last year coaching these young men, my wife and I will be moving to Murdo, SD. I am truly grateful for all the support over the past few years and the trust that the parents had in me to help mold their kids into football players and great young men. I will greatly miss this organization and hope to see it continue to thrive and give the kids a chance to play the greatest game there is.

I would like to say thank you to my assistant coaches, Brandon Catchpole, Cedric Coleman and Dustin Kleinsasser thank you guys for all the time and dedication you devote to this program. I would also like to thank our team moms, Rgie Wermager and Wendy Walker for all their time and for taking good care of the boys at the games. Thank you to the parents for trusting me and my crew to work with your kids and a huge thanks to Bill Graves and State Farm for believing in this league and being a great sponsor.

Although I will no longer be in Hot Springs I will always be a supporter of the Bills.

This season we had a lot of new faces on the PeeWee team which led to some growing pains as our 2-5 record shows. Though our record doesn’t show it I feel this season was a huge success. We had 16 players on our team this year which is an increase from last year. We focused on the fundamental skill sets needed for their future football careers. We also reinforced what it means to be a good teammate and the hard work needed to succeed not only in football but also in life.

We started the season off with a win against a good Lead-Deadwood 49ers team. Our next win came in week 4 against a young and fast Sturgis Buccaneers team. Our schedule this year included 5 of the 6 playoff teams in the PeeWee division of the BHYFL. We played a tough schedule but these young men never gave up no matter what the scoreboard said.

This year my assistant coaches were Jesse Naze, Jeff Janis and Shawn White. These gentlemen were instrumental in the growth of the players on our team. Each coach brought a special knowledge of the game. These guys donated many hours to make this team the best they could be. I was very lucky to have such a great group of men to help me coach and mentor our players.

I would like to thank our parents for being so supportive this season and for always being willing to volunteer when asked. I wish our 6 th graders the best as they move onto middle school football next season. Those 6th graders include: Aidyn Janis, McCoy Rippentrop, Alex Stanley, Gabe Maurer, Jeret Bilbrey and Layne Davidson.

ABOVE: Hot Springs Bills quarterback Josh Close takes the snap from center and looks to hand off to running back Knox Cuny versus the Box Elder Patriots during this past weekend's Black Hills Youth Football League Mighty Mites Super Bowl, played in Rapid City on the campus of the South Dakota School of Mines.

LEFT: Kaden Cruz tries to a fight off the ankle tackle of a Box Elder Patriot defender