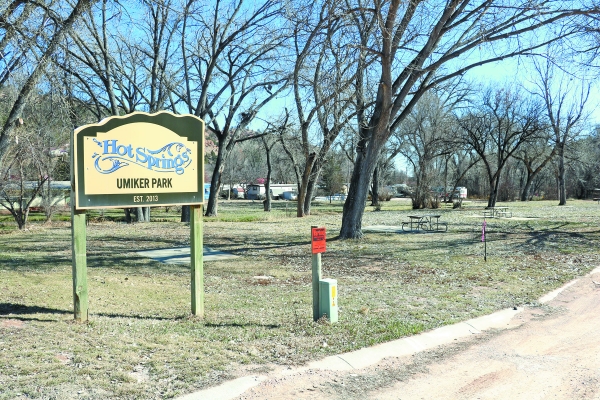 Umiker Park, located along Fall River at the bottom of the Hwy. 18 truck by-pass, is the possible future site of a dog park. Brett Nachtigall/Fall River County Herald-Star

A motion was initially passed to approve the 13 park fees for the Farmers Market group, but after considerable discussion amongst councilmembers, along with a member of the audience, it was eventually tabled by a vote of 5 to 2 so that the Parks Committee could have time to weigh-in on the topic.

Prior to the majority decision to table the matter, Councilman Bob Nelson said that the Administrative and Finance Committee did not recommend approving a waiver of the fees, as it would make for a blurry line between who should pay, and who shouldn’t pay, for use of the park. He said the fear of the Admin Committee was that it would set a dangerous precedent of not charging for use of the park and that they would likely see an increase of requests from similar organizations. This, he said, was evidenced by the same request of the Arts & Crafts Committee, which was next on the agenda, who has been paying the usage fee for many years.

Nelson said he was at one time in favor of waiving the fee for the Farmers Market when they first started a couple of years ago, as a way to help the organization get off the ground, but now felt they should pay.

Councilperson Alison Ritterbush stated that there has been extensive discussion on the topic and said that one of the considerations to determine who should or not pay for use of the park would be if the event was open to the public, or a private event.

Councilman Bill Lukens weighed in and said that use of Centennial Park “it’s not neutral for the city,” and whenever a group or individual applies for its use, there is administrative and parks employee responsibilities that come along with it.

Morris Nelson, who is President of the Farmers Market group, was in the audience and allowed to come to the microphone and give a plea as to why the city should waive the fee. He said the Farmers Market provides an economic benefit for the City of Hot Springs because vendors pay sales tax to the community for the goods they sell. He said the market is open to the public and provides a reason for residents and visitors to come downtown one night a week and patronize the town’s other downtown businesses, thus spending more in town.

He said their organization operates on a small budget and that paying the $260 for the season’s park fees would have a very negative impact, which would likely mean increasing the booth fees to their vendors. He added that their other overhead costs like advertising and paying an individual to organize the weekly events are paid for by the vendor fees, which doesn’t leave much leftover to pay for the weekly $20 application fee. He acknowledged however that they are willing to pay the $15 electrical fee for use of electricity in the park during the events.

Dave Burris, who is the chair of Parks, Recreation, Beautification and Cultural Development, said that his committee had never been given the opportunity to look into the matter more closely, and thus analyze the actual cost to the city of allowing these groups to reserve Centennial Park.

His eventual motions to table both the Farmers Market and Arts & Crafts Festival waiver requests passed 5 to 2, with only councilmembers Craig Romey and Caitlin Turner voting against both motions. The matter will likely be put on the next agenda for the March 16 meeting.

During his Parks Committee report earlier in the meeting, Burris described how the committee had been working with community members to convert Umiker Park, located along Fall River near the Econolodge Motel, into a Dog Park.

Burris said there has been a great deal of public interest in doing so, including the fact that the “supporters are very ready to do this … ready to write checks … ready to get going.”

According to Burris, there is not expected to be any significant cost to the city to convert Umiker Park to a Dog Park, with the only costs being associated with maintenance which the city is already doing. Any improvements to the park – including fencing and other modifications like benches and watering areas – will be paid for by community members who are in support of the plan. Burris said the initial estimates to build a fence around the park on the westside of the river (towards Econolodge) are coming in at $7,500 to $8,000, which will be paid by supporters.

Burris said the park would be divided into two areas – one for smaller dogs and the other for larger dogs, both double-gated to ensure the dogs do not get away and run into the nearby highway. He added that there are a number of studies that show the behavioral benefits of socializing animals in fenced-parks, such as the one the community is proposing. Burris also said the the proposed Dog Park has the support of the park’s namesake Eldon Umiker, as well as the nearby motel, which is a pet-friendly establishment with rooms designated for pet owners.

Fellow councilmember Ritterbush agreed and said the possible Dog Park was a much-talked about topic at the recent Puppy Plunge held at Evans Plunge over the weekend, with many participants expressing their support of the idea.

Mayor Kotti said the topic would be brought up on the next council agenda on March 16 for the council to vote on designating the park, as recommended by the Parks Committee.

In other business, the council:

• Heard during John Gregory’s City Administrator Report that the city had received a cost estimate from RCS Construction concerning the condemned Wesch-Oak building. He said the estimate for demolishing the structure, excluding the south wall which adjoins the building next door, would total $85,000. In addition, to save the sandstone front facade and support that, would cost $40,500. To combine the two efforts would then cost a total of $125,500. Gregory also stated that Hult Homes was planning to soon start mobilizing efforts to place the Governor’s Homes on the city’s Canton Avenue lots.

• Heard during Bob Nelson’s Public Works Committee Report that they were not recommending a change to the hours of operation at the city’s landfill, for the purpose of disposing of brush. He said the committee was instead exploring the idea to install video cameras, as opposed to only being open when city personnel are present.